It sucks to be Batman these days. Everyone is having a go at you. Whether it's UK left-wing activists Momentum, or your trusted (but possibly imaginary) butler, or even Netflix's The Patriot Act. And in today's Supergirl #37, the Depressionverse-infected versi0n of Kara has some home truths for Batman.

Hey hey, Bruce Wayne-y, how many kids did you kill today? She's not the only Infected to have asked such a question of Batman. 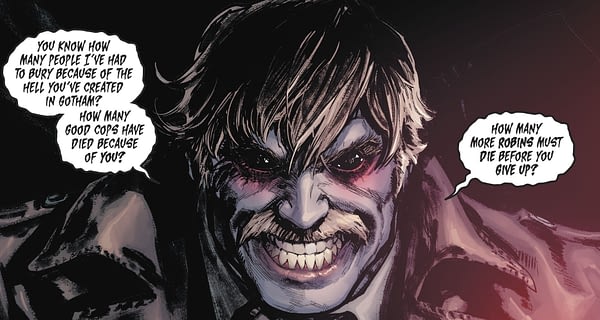 He must have a stock answer to this by now, yes?

UPDATE: Even Damian Wayne is having a go in today's Detective Comics #1017 as well…

SUPERGIRL #37
(W) Jody Houser (A) Rachael Stott (CA) Bengal
Infected Supergirl strikes! After Supergirl protects Superman from getting infected by the Batman Who Laughs virus, she gets infected herself…and accepts this new version of herself with pride! With Batman and Superman claiming to want to "cure" her to cover up that she had to protect Superman, and the Batman Who Laughs wanting to use her in his own plans, which side will Supergirl choose? Or will she forge a whole new alliance?In Shops: Dec 11, 2019
SRP: $3.99

Supergirl #11 is published by DC Comics today in all good comic shops. I bought mine from Piranha Comics in Kingston-Upon-Thames. Piranha Comics is a small south London comic store chain with a small south-east store in Kingston-Upon Thames's market centre, which runs Magic The Gathering nights on Fridays, and a larger south-west store in Bromley, which also runs Magic nights and has an extensive back issue collection and an online store. If you are in the neighbourhood, check them out.