Netflix has made the "difficult decision" to pull the plug on One Day at a Time, which just debuted its third season last month.

We've made the very difficult decision not to renew One Day At A Time for a fourth season. The choice did not come easily — we spent several weeks trying to find a way to make another season work but in the end simply not enough people watched to justify another season.

Some One Day at a Time fans have pointed out that it's hard to know what exactly justifies "enough people" it would take to justify a fourth season, since Netflix doesn't release viewership numbers.

One Day at a Time was lauded for its strong, realistic portrayal of a single mother (Rita Moreno), who just happens to be a veteran with PTSD. The show also tackled relevant, timely issues involving the LGBTQ community, as well as racial issues that affect LatinX Americans.

Mike Royce and Gloria Calderón Kellett are the co-creators and executive producers behind One Day at a Time, and posted the following on Twitter:

Last night, Netflix told us they are cancelling One Day at a Time. We had the time of our lives making this show. We worked with the best, most giving and talented cast, writers and crew ever, as well as the incomparable Norman Lear. So while our hearts are very heavy, they are also bursting with the appreciation for this amazing experience. 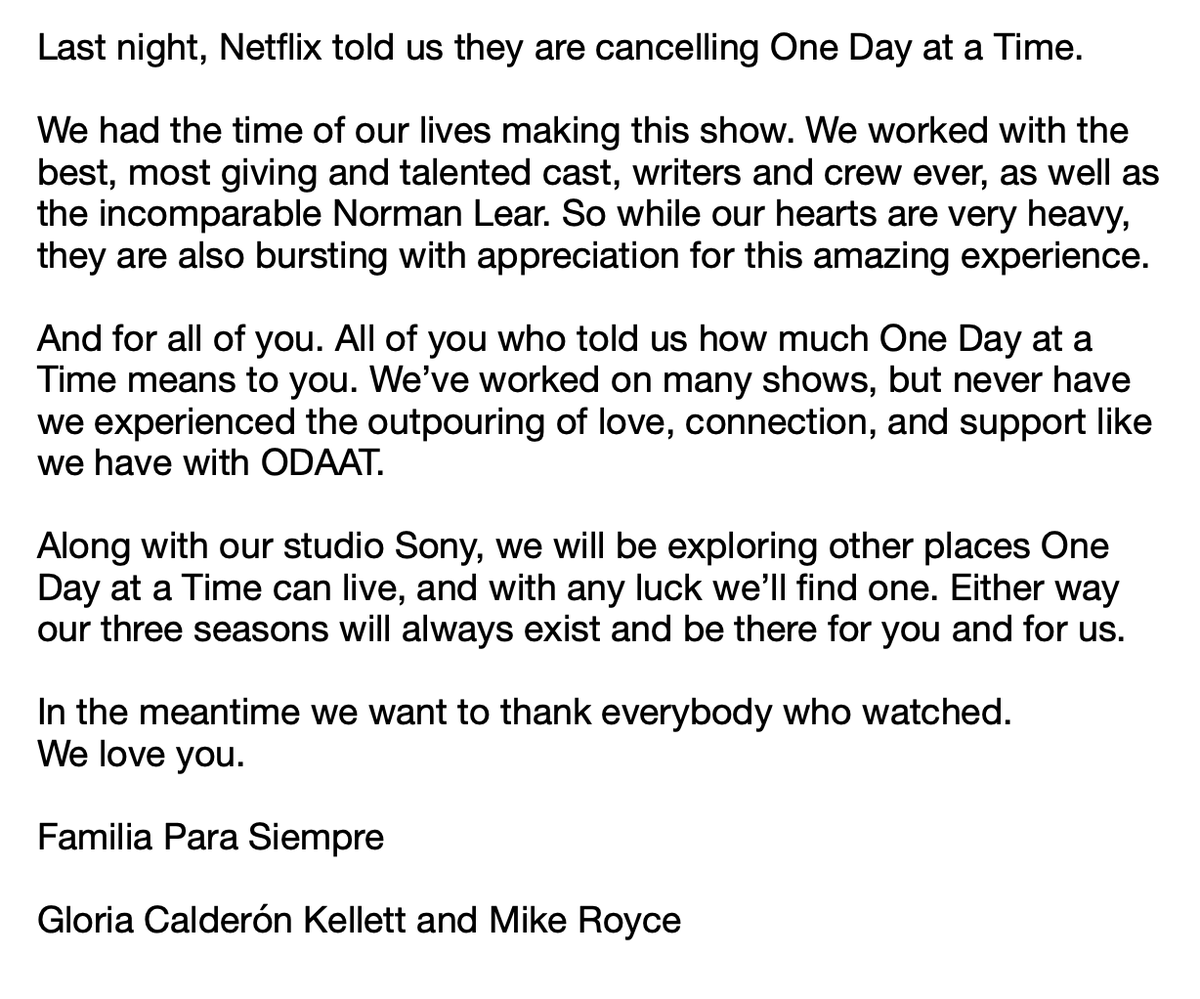 Reaction from the cast and crew has been supportive, sad, and grateful to the show's fans:

I'm so grateful to have played Penelope Alvarez. I don't even know how to begin to express my gratitude to everyone. Truly, I am so honored that we got to tell our stories .Yes it was a Latinx family but it was a universal story about family and love. An American Familia ❤️

My heart is breaking, but I still can't help but thank Netflix for giving the Alvarez family a home for 3 years and for changing my life… and to the fans: familia para siempre. I got you. ❤️ https://t.co/ECvLXaJoqP

Celebrity fans have weighed in on the cancellation as well, with Lin-Manuel Miranda posing a serious question at NBC:

Hey @nbc…I hear you like comedies with built-in fan bases that do even better on YOUR network than at their previous homes…#saveODAAT https://t.co/5bIQYexpDz

Even Ted Sarando, the Chief Content Officer at Netflix, weighed in on the cancellation decision:

It's been a great honor to work with the legendary Norman Lear on One Day at a Time," he said. "I've personally spoken with Norman, and co-creators Gloria Calderón Kellett and Mike Royce, to express my gratitude to them, all the writers, the dedicated crew and the cast including the brilliant Justina Machado and dazzling Rita Moreno for creating a series with such humor, heart and humanity. This was a very difficult decision and we're thankful to all the fans who've supported the series, our partners at Sony, and all the critics who embraced it. While it's disappointing that more viewers didn't discover One Day at a Time, I believe the series will stand the test of time."

Whether this is the end of One Day at a Time altogether has not yet been determined, and we'll keep you updated with news as we get it!

Leigh George Kade is a writer, illustrator, and sculptor who lives in Salt Lake City with his wife and two small Skrulls. Leigh has also been a panelist on the wildly popular Geek Show Podcast since 2008. He has been an Entertainment Writer for Bleeding Cool since 2018.

"Love Boat Angels" was so much more than the fourth season premiere of ABC's flagship jiggle show, "Charlie's Angles". It was also mind-numbingly dull.

"The Hunger": A Feast for the Eyes, Not Much for the Brain (Neon Cinema)

"The Mandalorian": Finally! Something "Star Wars" Fans Can Be Thankful For [OPINION]

"Star Wars" fans seem to overwhelmingly love "The Mandalorian", which is great news for the franchise and people who really miss openly loving "Star Wars."

"The Mandalorian" continues its excellent first season, with "The Sin" filling in a ton of "Star Wars" lore and tons of thrills.

"His Dark Materials" S01, Ep03: "Spies" of Every Shape and Size (Spoiler Review)

"Spies" slows down the action a bit on "His Dark Materials", but definitely ramps up the intrigue on BBC and HBO's adaptation of the Phillip Pullman novel.

"Minecraft: Builders & Biomes" Brings the Action to (Board Game) Life

Ravensburger has a brand new board game that brings the classic action of "Minecraft" home just in time for the game's 10th anniversary!