A special time of the year has come to town for the Tobin family and their home in Lone Moose, as FOX's The Great North explores Ham's obsession with a singing fish and competition that has Beef paranoid. This episode, "Beef's Craig Beef Adventure," focuses on the Tobin kids and Honeybee reaching out to Beef as they believe he's starting to go through some sort of mid-life crisis. What ensues is a well-crafted storyline that focuses on the family figuring out a long-standing feud with Beef's childhood friend, Craig.

As they hope to win the Halibut Run competition by getting the most fish in an allotted time, Wolf hopes they can succeed in order to get the funds to rent a jet ski Beef wanted to ride. Instead, Craig is revealed to be jealous of Beef's past with his ex-wife Kathleen and tries to get back at him in the competition. At the same time, Ham's experience with a wall-mounted singing fish is hilarious to witness in between fishing moments.

What I loved about this episode of The Great North was the continued theme of the Tobin family working through things together, instead of seeing characters go through things alone. It showed a healthy way of dealing with the big and small things that can come up, there's comfort in realizing problems around family or friends who know you. A fantastic character in this episode felt like a draw between Ham and Wolf. Both had great moments of dialogue, with some questionable sanity moments from Ham but still so much fun nonetheless. Why the beginning had a slow start, that seemed to be the main issue I would have with this episode of The Great North. Besides that, "Beef's Craig Beef Adventure" continued to explore Beef's character which only made the others around him stronger as the series goes forward. 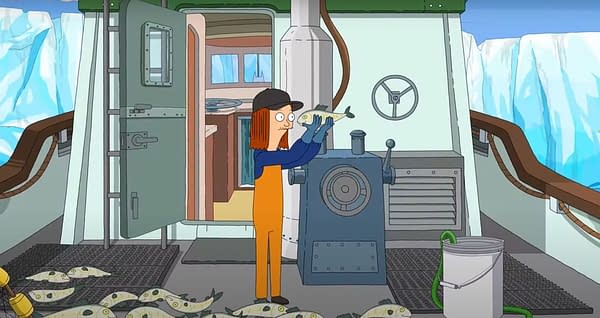 Review by Brittney Bender
8/10
FOX's The Great North went fishing and pulled a great story with this episode, filled with the Tobin family bringing some sense to a hilarious feud. Although a slow start, the finale was a great exploration of what we may think we're missing out on when we look at what another person has without considering their personal experiences.
Credits
Network
FOX