There's something quite magical right out of the gate about HBO Max's Peacemaker. From the twisted mind of James Gunn (based on the Joe Gill and Pat Boyette comic), who directed 2021's The Suicide Squad, the TV spinoff focuses on one of the said hero's originally thought dead unless you stuck around for the film's end credits. While Task Force X ultimately saved the world from Starro, Peacemaker/Christopher Smith (John Cena) spent months recovering in a hospital bed from his near-fatal wounds largely inflicted by Bloodsport (Idris Elba). While he was released (sort of) courtesy of Amanda Waller (Viola Davis), the hero is "recruited" (i.e.: forced) to join another team doing covert ops missions.

Also assigned are those who helped defy Waller's orders, Emilia Harcourt (Jennifer Holland), the most cynical of the group who won't hesitate to beat up anyone who dares look at her funny (justifiably given the assholes she has to deal with); and John Economos (Steve Agee), an ARGUS technician who appears to have a hint hypoglycemia and also loathes his new assignment. Both along with Cena and Davis are holdovers from the film. Also in the group is Leota Adebayo (Danielle Brooks), the daughter of Waller, and member of the team; and Adrian Chase/Vigilante (Freddie Stroma), a self-proclaimed crimefighter who looks up to Peacemaker. Leading this contingent is Clemson Mum (Chukwudi Iwuji), who's a mercenary tasked to lead Project Butterfly. The final member of the core cast is played by Robert Patrick, who plays the ultra-conservative August "Auggie" Smith / White Dragon. He takes every opportunity to emasculate his son Chris because, for the purposes of the plot, we need to know why Cena's character's a source of toxic masculinity.

We do find White Dragon's purpose to help act as Peacemaker's armory for his tech and arsenal. Much of the dynamics of the first episode "A Whole New Whirled" drives the point of making Cena's character one out of empathy. Despite his antagonistic turn in the 2021 film, Gunn does a remarkable job grounding the character initially driven on impulse. The premiere finds himself back acclimating to the real world since his incarceration. While largely attached to his alter ego, Cena's often dressed in costume and feels a bit surreal since he treats it so casually while his team tries to remind him what normal actually is.

The awkwardness from Cena gives him an endearing quality almost to the point of childlike innocence kind of like The Tick. The way he's able to carry himself so well in his bulk provides some hilarious meta moments of Bruce Campbell-like proportions. The sex scene followed by an impromptu…karaoke scene, and the subsequent fight scene is the kind of ridiculousness, camp, and off-the-wall R-rated humor I sorely missed since Ash vs. Evil Dead. Cena is such a natural talent for comedy that potentially could surpass another WWE superstar-turned-actor Dwayne Johnson. I don't think I have ever seen Cena have such a good time, even in WWE. Every character brings something substantial to the table in the premiere episode and nothing is wasted. Everything from the opening theme musical number, the pet eagle, to the end is pure magic. My initial expectations were high, but Gunn seems to always find new ways to outdo himself and WarnerMedia would be wise to give him the keys to more live-action DC projects. 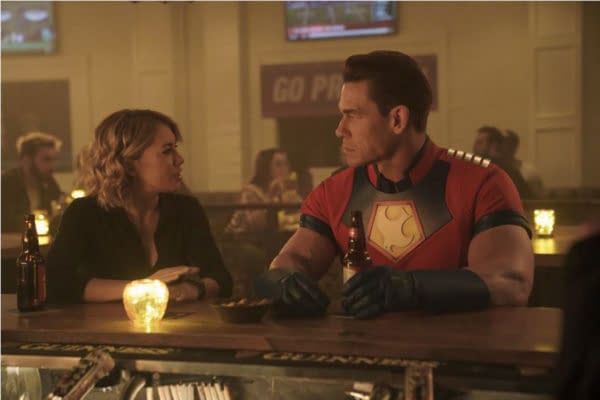 Review by Tom Chang
10/10
Everything James Gunn touches turns to gold lately, even an abrasive a**hole like Peacemaker, who he might just be turning into a sympathetic and likable everyman. John Cena shows he's far more than a musclebound talent, demonstrating both a sense of self-awareness that would make Bruce Campbell proud as well as some serious dramatic & comedic chops. I couldn't image a premiere episode that delivered in recent memory so well out of the gate than this HBO Max series- now onto the second episode!
Credits
Director
James Gunn