We noted last month that in The Batman's Grave #5 that Jim Gordon had taken over from Alfred Pennyworth as the sardonic voice of criticism of Bruce Wayne. And amidst all the fine fight choreography that Ellis, Hitch and Nowlan have been bringing us in this run…

… Gordon keeps it up in the new issue out today, with a cutting jibe at how extreme Batman's gadgets have been getting today.

And with the main ongoing Batman series (below) giving us a 'Batspawn' host of weaponised drones under Batman's remote control, Gordon doesn't know the half of it. 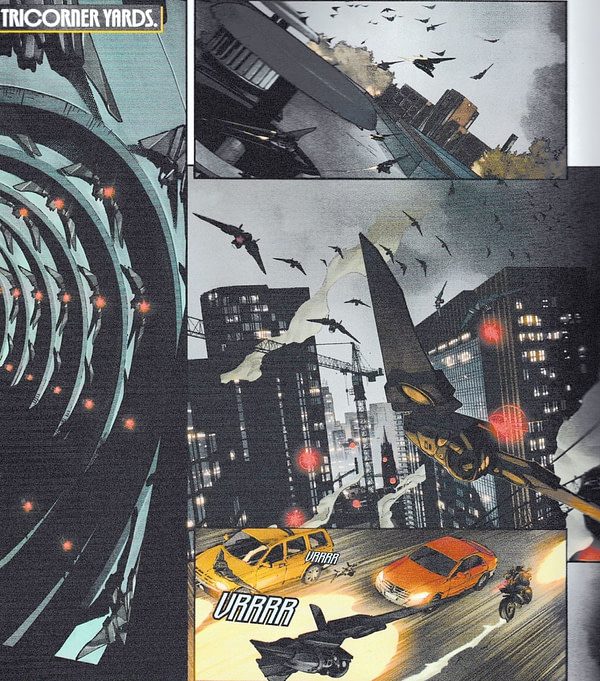 Gordon even berates Batman for not being on WhatsApp.

All fun and larks. But we do get to learn about Alfred's own vigilante days.

He had some interesting fight choreography too…

THE BATMAN'S GRAVE #6 (OF 12)
(W) Warren Ellis (A) Kevin Nowlan (A/CA) Bryan Hitch
The Batman is trapped in the most dangerous house in Gotham City, trying to protect Commissioner Gordon from a secret army out to kill anyone involved in the justice system. The war on the law has only just begun.In Shops: Mar 11, 2020
SRP: $3.99

That Batman's Grave #6 is out today from DC Comics… I bought mine from Piranha Comics in Kingston-Upon-Thames. Piranha Comics is a small south London comic store chain with a small south-east store in Kingston-Upon Thames's market centre, which runs Magic The Gathering nights on Fridays, and a larger south-west store in Bromley, which also runs Magic nights and has an extensive back issue collection and online store. If you are in the neighbourhood, check them out.