When the trailer for Willy's Wonderland first came out, 99 percent of you probably thought that it's the video game Five Nights at Freddy's all over again. That's not really a badge of honor here with the Kevin Lewis film written by G.O. Parsons. In fact, as much as it pushes to your face, two things that should easily be fun popcorn fodder in killer animatronic robots vs. star Nicolas Cage, it turns out to be a huge squandered opportunity even with the bar set as low as can be.

So the story starts off with an isolated Midwest town with a shutdown amusement-themed restaurant called Willy's Wonderland, which really isn't different from any pocket-sized Disney or Chuck E. Cheese-type of family experience. When Cage's character, which is named "Janitor," travels through town with his muscle car, road spikes ground him taking out all his tires. The tow truck driver and mechanic (Chris Warner) gives him the runaround accepting only a heavy amount of cash and offers the convenient excuse of not accepting plastic, and all the town's ATMs are down. Since movie logic, the janitor doesn't carry that much in bills so he offers a proposal for him to "work" it off by cleaning up Willy's Wonderland owned by a crude Texas stereotype with a 10-gallon hat and all Tex Macadoo (Ric Reitz), who offers to pay for the tire replacement in exchange of the deed.

Janitor accepts all this without saying a single word. Yes, it's not really a spoiler, but Cage doesn't offer a single enunciated word, but grunts, groans, and facial expressions. The one film that could best benefit from anything, even cheesy one-liners, largely stays silent. So he basically has four things to do, fights the possessed robots, kills screen time feigning his excitement over pinball, drinks his energy drinks (or canned meth?) at intervals, and performs his superhero duty minimally involving himself with the other characters who are flat useless. Everyone else cast in the film from the youth-led by Liv, played by Emily Tosta, is just random walking dumb teenager horror clichés. Even as the "most prominent" person in the group, she's given a throwaway subplot that doesn't affect the story whatsoever. The human antagonist in Sheriff Lund, played by the talented Beth Grant, is egregiously misused. Even if it's not really meant to be taken seriously and purposely hammed up as a b-movie character, five minutes more fleshing her out would have been the difference between passable misguided loon to someone pulled from Tommy Wiseau's The Room. Grant deserved way better than this.

So if you just edited together a mix of Cage, who co-produced the film, beating down the character's rage-room style for the actual 30 minutes of the film worth watching, you're better off. There's little imagination to the kills of the human victims. Screen Media Films' Willy's Wonderland is available on digital, on-demand, and select theatres. 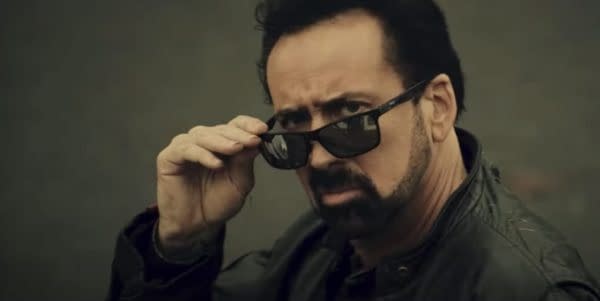 Review by Tom Chang
3/10
Nicolas Cage relentlessly beating up demonic animatronic robots? 13. Lazily cobbled together horror cliches with next-to-no substance? -10. I'm not even that mad that Cage has no lines, but if you're not going to write any quality dialogue for the other characters, then your star needs to talk to save this mess.

Avatar: The Way Of Water is now the fourth highest grossing film ever worldwide, meaning James Cameron owns 3/4 spots in the top 4 himself.

Mia Goth spoke out about the lack of horror nominations at the Academy Awards yet again this year: "A change is necessary"

TMNT Soundtracks Back On Vinyl At Waxwork Records

TMNT fans will want to head over to Waxwork Records and snag the three soundtracks to the live action films before they sell out again.