With Extreme Rules just two nights away, WWE Smackdown has one last chance to sell fans on the PPV. WWE has felt slightly reinvigorated over the last two weeks, ever since AEW Dynamite beat Raw in the ratings. Can the company continue with this momentum?

Becky Lynch opened Smackdown this week, proving WWE finally has the versatility in its storytelling techniques to have Becky cut the obligatory overly-long opening promo instead of Roman Reigns. Becky complained that Bianca Belair got a party last week despite all that Becky has accomplished and blamed Belair for Becky attacking her last week. Piped-in-crowd noise displayed the WWE production truck's displeasure with Becky's words.

Belair came out to relitigate SummerSlam again and brag about her own accomplishments, which she accomplished faster than Becky. Belair was confident things will go differently at Extreme Rules. She does know she works for WWE, right?

Becky slapped Bianca in the face. Bianca attacked her. Lynch tried for a Rock Bottom but Bianca blocked and hit the KOD. Simple… but effective.

Rick Boogs assaulted the audience with his out-of-tune guitar playing before Nakamura defended the Intercontinental Championship against Apollo Crews (w/ Commander Azeez) in a largely forgettable match, which Nakamura won despite interference from Azeez. As punishment, Boogs played guitar during and after the match.

Kayla Braxton interviewed Montez Ford alone backstage because Dawkins was at a wedding. Ford promised that, for their milestone 100th rematch for the WWE Smackdown Tag Team Championships, the Street Profits will finally beat The Usos at Extreme Rules.

Heyman channeled his inner Karen and demanded WWE management Sonya Deville and Adam Pearce give Roman the match he wanted. They agreed to it.

Seth Rollins cut a promo on Edge backstage with the lights out. He demanded Edge admit that Rollins is better than him or Rollins will go to Edge's house and beat him up in front of his family. Edge's house match at Extreme Rules?

Liv Morgan faced Zelina Vega, with Carmella on commentary. Morgan wanted to face Carmella at Extreme Rules, but had to go through Vega first.  Which jobber was triumphant? Surprisingly, it was Vega, after interference from Carmella. Ah, the classic WWE plan to get someone over: book them like a loser.

Happy Corbin wore a custom-tailored $9,000 suit to the ring for the first episode of his new talk show, Happy Talk. The first guest: Happy Corbin himself. Corbin bragged about his riches and luxurious lifestyle. Corbin bragged about beating up Kevin Owens last week, so Owens interrupted… but Riddick Moss came out of nowhere (read: behind the camera) to jump Owens. Corbin and Moss double-chokeslammed Owens on the steel stairs. The Ratings King of Friday Nights continues to stay on top.

Kayla Braxton asked Montez Ford if he regretted calling The Bloodline bitches now that he has to fight Roman in the main event. Ford doubled down instead.

On Twitter, Edge promised to show up on Smackdown next week.

Nikki Ash and Rhea Ripley defended their Tag Team Championships against Natalya and Tamina. Nikki pinned Natalya in under a minute. Then Shotzi and Nox rode out on their tank and fired it at the champs, staking their claim to a title shot. Holy crap, a match we haven't seen a hundred times before?! WWE really is pulling out all the stops in this ratings war!

Backstage, Rey Mysterio berated his kid for losing to Sammy Zayn all the time. Dominik said his dad needs to give him some space, man. He says he would have beaten Sami if Rey didn't distract him. Rey stormed off. Zayn walked up and put over Dominik's potential… but he suggested that Dominik stop listening to his dad's advice.

Naomi channeled her inner Karen, came out, and demanded that Sonya Deville book her in a match tonight. Deville came out and refused, so Naomi demanded a match with her instead. Deville said she's management now and doesn't wrestle. Naomi led the crowd in a "make the match" chant. Deville had security remove Naomi from the ring. Deville said that the only thing Naomi has going for her is her entrance and it's her own fault she has no opportunities as Naomi was escorted backstage.

As The Bloodline got ready for their entrance, Shorty G and Otis confronted The Usos backstage.

Montez Ford faced Roman Reigns in the WWE Smackdown main event. And you might have been thinking, wow, a half hour for the Smackdown main event? What is this, Omaga vs. Danielson? But as it turns out, about 25 minutes was spent on commercials. Reigns beat Ford, of course, by tap out.

After the match, Paul Heyman said that Roman should show everyone what it means when Roman Reigns takes things "to the EXTREME." Aw, Paul. I still miss ECW. The Usos came out and set up a table outside the ring as Reigns assaulted Ford with a chair. "Who's the bitch now, huh?!" said Reigns as he chokeslammed Ford through it. The lights went out, and The Demon appeared on the ring post and hit a diving crossbody on the Bloodline. Then he beat the Usos with a kendo stick and beat Roman with a chair. Who's the bitch now, Roman?! WWE Smackdown ended with Finn Balor triumphant, which guarantees he loses on Sunday (in case anyone had any doubts).

That Dynamite ratings win three weeks ago seems to have given WWE the kick in the ass they needed to start putting some effort into their storylines. WWE Smackdown isn't perfect, but it feels little bit less like a waste of time, and nothing was so overtly bad it took me out of the show. Time will tell whether it lasts, but for now, WWE seems to have gotten its shit in order. 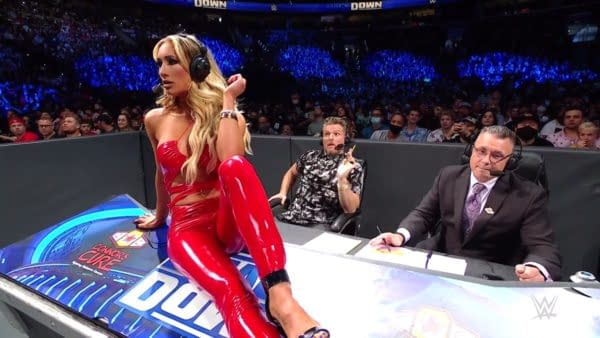 Review by Jude Terror
7/10
That Dynamite ratings win three weeks ago seems to have given WWE the kick in the ass they needed to start putting some effort into their storylines. WWE Smackdown isn't perfect, but it feels little bit less like a waste of time, and nothing was so overtly bad it took me out of the show. Time will tell whether it lasts, but for now, WWE seems to have gotten its **** in order.

After Smackdown lost to Rampage in the ratings, you know WWE was out to punish their fans with a particularly bad episode of Raw.

Celebrate Charlie Brown, the ultimate underdog, by bidding for this original Peanuts production cel over at Heritage Auctions. Sponsored.

Daredevil: Charlie Cox Cautions Fans to Be Careful What They Wish For

Netflix's Daredevil star Charlie Cox discusses what a return could mean and cautions fans to be careful about what they're wishing for.

Bring The Simpsons: Treehouse of Horror to Your Home This Halloween

Bring The Simpsons: Treehouse of Horror to your home this Halloween by bidding on these original production drawings at Heritage. Sponsored.

It's Always Sunny in Philadelphia star Rob McElhenney learned that the late, great Norm Macdonald was a fan of the show & had reached out.

Michael Sheen Same Odds As Olly Alexander For Doctor Who

Doctor Who oddsmakers now have Olly Alexander sharing the odds as the next Doctor with none other than Good Omens 2 star Michael Sheen.

Amazon Prime pulled out all the stops in Hollywood to promote the opening weekend of their I Know What You Did Last Summer series.