Bleeding Cool mentioned this was coming, and today's Catwoman #25 certainly confirms… some of it. But maybe not all. Maybe you have to read between the lines. We see the run-up in today's Batman #99, with Catwoman, The Penguin and The Riddler going to get their money – and Bruce Wayne's money – back from The Underbroker. Say, can anyone create a James Tynion IV character-naming programme?

Only for a double-cross from Catwoman. As the Bat's beau you might have thought the others could have seen this coming, but she probably just double crossed them before they could do it to her.

And Catwoman doesn't get the money at all. Remember that panel in Batgirl #48? Selina Kyle appearing to be driving Luke Fox as a chauffeur? 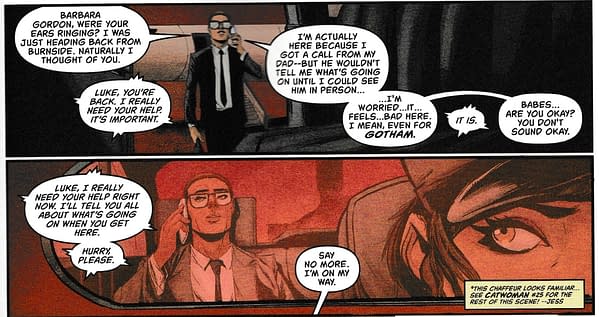 We get the full version of what happened next.

The money has gone to Lucius Fox, that covers the stolen 100 billion dollars from the Wayne Foundation (you'd have thought someone would have picked up on those transactions one way or another) and the Penguin and Riddler millions too.

But this comic book seems to suggest that the Foxes will be giving the Wayne money back to the Wayne Foundation. But from where it looks, that won't be happening. Instead, the paradigm of the Batman world will be changed. Bruce won't get the money back. It will be in the hands of Lucius and Luke Fox. And Batman's superpower will now have to be something other than rich…

CATWOMAN #25
DC COMICS
JUL200420
A tie-in to "The Joker War"! Catwoman returns to Gotham City to get even with the people who stole her plans and used them against Batman…and if you're the Riddler or the Penguin, you better watch your back, because Catwoman is coming to claim what she deserves…and that's everything! Plus, two bonus tales: One a story about Catwoman going back to her home turf of Alleytown to start her empire, and another about a cat trying to intervene in a conflict of cat versus woman!In Shops: Sep 23, 2020
SRP: $5.99

Dale Keown time! We've been looking at the 2021 June 17 - 19 Comics & Comic Art Signature Auction #7244 auction from Heritage, which may be their most

Lunar To Distribute Marvel Comics To Comic Stores Next Year

Bleeding Cool ran a couple of articles on the big moves that DCBS, InstockTrades and Lunar Distribution have been making recently, moving to massive new

Tthe following tweet from the Pulitzer Prize committee, posted yesterday, stated that "No prize was awarded in Editorial Cartooning". But no, it appears

According to their company filings, IDW Media appointed one William E. Rapfogel as their Executive Chairman in March last year. He has also previously

Dale Keown time! We've been looking at the 2021 June 17 - 19 Comics & Comic Art Signature Auction #7244 auction from Heritage, which may be their most

Rounding Up the Strays in Catwoman #32 [Preview]

Things aren't going well in this preview of Catwoman #32 by DC Comics, as Selina's sidekicks are being rounded up by the cops.

In this preview of Demon Days Mariko #1, Mariko is having nightmares... does her grandmother hold the key to unlocking her secrets? Check out a preview here.

Trese: The Time She Teamed Up with Wolverine and Batman

Check out a preview of Static Season One #1, in stores Tuesday from DC Comics, ushering in the long-awaited return of Milestone.