We talked about the history of Hypertime at DC Comics earlier on Bleeding Cool and how now it is being used as a home for the Flashpoint continuity, away from the rest of the DC Omniverse. A place for Psycho Pirate to hide from Dark Crisis. But also a place for Professor Thawns, the Reverse Flash, one of the main instigators of Flashpoint and the Flashpoint spinoffs that followed through Batman and The Flash, to run to.

It's not the only world being placed here. As we see from Psycho Pirate's notes for the Divine Continuum.

Clark and Sally being the children of Nite Owl and Silk Spectre – with Clark genetically the child of Mime and Marionette, but infused with the powers of Dr Manhattan. 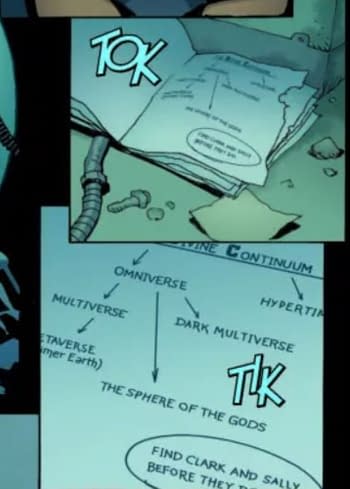 With the reality of Flashpoint Beyond laid out, including Doctor Manhattan about to make an appearance again. And this time he is wearing underwear. Ever since Batman Damned.

And remember how Silhouette's death was portrayed in the Watchmen movie? The comic book just had the line;

In 1946, the papers revealed that the Silhouette was living with another woman in a lesbian relationship. Schexnayder persuaded us to expel her from the group, and six weeks later, she was murdered, along with her lover, by one of her former enemies.

As shown in the movie;

And echoed in Flashpoint Beyond #3 with the final fate of the Reverse-Flash.

It seems that the world of Watchmen is being placed in Hypertime alongside the world of Flashpoint, and because it is Hypertime, things bleed from one world to another…

FLASHPOINT BEYOND #3 (OF 6) CVR A MITCH GERADS
(W) Geoff Johns, Tim Sheridan, Jeremy Adams (A) Xermanico (CA) Mitch Gerads
The DC event of 2022 continues! Thomas Wayne's investigation into the Clockwork Killer goes sideways when he is confronted by a deadly alien invader the world knows as…Project: Superman? But what's happened to the Kryptonian and Krypton in the World of Flashpoint? Will Thomas Wayne do what he has to in order to stop Superman—or has he changed? And what are those strange earthquakes now erupting across reality? Retail: $3.99 In-Store Date: 07/05/2022

Strange #5 Preview: Hair of the Dog That Bit Them

Clea and the Harvestmen must team up to stop the reckless abuse of death in comics in this preview of Strange #5... by bringing back Doctor Strange?!