In the classic Spider-Man story Sins Past, it was revealed that Gwen Stacy had a secret sexual affair with Norman Osborn which resulted in two children, but, more importantly, in this… 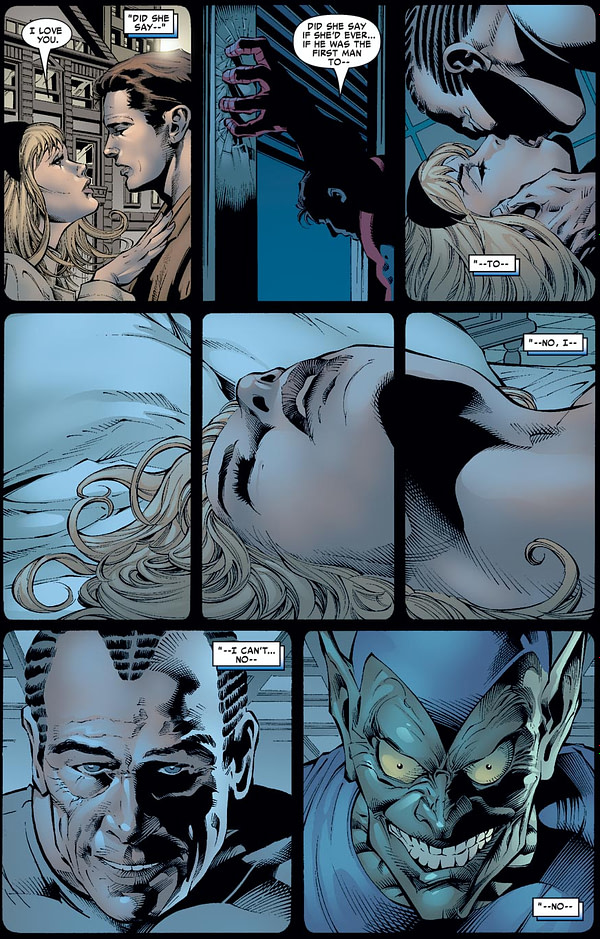 Yuck. Gwen Stacy #2 is in stores this week from Marvel Comics, by Christos Gage and Todd Nauck. We've got a preview below.

Gwen is out to clear her father's name after a mob scheme to discredit him.

And she has the help of her boyfriend and best friend, as well as some technology from Oscorp. Technology obtained in a spurious fashion, which makes it important that Norman Osborn doesn't find out.

Which makes it unfortunate that he's just walked in. But while Norman is keeping a stern face about things, the Goblin, it seems, is… well, he's making that damn face.

Gwen Stacy #2 is in stores on Wednesday.

GWEN STACY #2 (OF 5)
JAN200945
(W) Christos N. Gage (A) Todd Nauck (CA) Adam Hughes
• Gwen's dad is hurt, in the hospital and implicated in corruption charges.
• But what is a high school student of the month/class president candidate/science team captain supposed to do about that?
• Gwen isn't the type to sit on her hands even if it means crossing the Crimemaster and worse!!!
• Don't miss this in-continuity tale that will change the way you look at the most-beloved Marvel character of all time!
Rated T
In Shops: Mar 11, 2020
SRP: $3.99