The Dark Horse series Buzzkill was a fan favorite of 2013, and even got plenty of attention in the yearly assessment here on Bleeding Cool. But even before the hard-hitting end to the mini-series about a substance-fuelled, guilt-ridden and conflicted super-hero, I was asking if there would be more Buzzkill. The answer seems to be yes and yes/no/maybe. Yes, in the sense that it's coming this April 2nd to a trade collection. Yes/no/maybe in the sense, well…you'll see below in this interview with co-writer on Buzzkill Donny Cates by seasoned comic storyteller Mark Waid.

Mark Waid was originally quoted on the cover of the first issue of Buzzkill as saying "God, I wish I'd thought of this" in terms of the series' concept, so here we get to see what kinds of questions are still on the mind of an early fan of the comic. Cates and Dark Horse have also generously gifted us with a FREE copy of Buzzkill #1 below. Stay tuned…

Mark Waid: Such a great concept.  Where'd it come from?

Donny Cates: The basic concept ( guy gets powers from drinking and doing drugs) came from my buddy (and drummer of The Toadies) Mark Reznicek. He's a HUGE comic book nut and threw the idea at me after I badgered him about doing a book together. The idea really begin to take shape right away, I thought it would be interesting to not take the easy way (think Hancock) and instead, approach it from a really honest, and frankly, dark angle. An addicts work through the 12 steps makes for an almost perfect "hero's journey" analogy that made it really easy to structure.

MW: Talk to me more about using addiction as the basis of a superhero story. It's edgy to the point of being dangerous–did you realize that going in? What made you so passionate to tell this particular story?

DC: That was absolutely at the forefront of my thinking going in to this book, if the readers (especially any that were going through something like addiction or have been affected by it) thought for a second that we were being disrespectful or taking advantage of the subject matter it could have conceivably been really offensive and hurtful. Our intention with the book was to never let the joke be on Ruben, to make him an honest and real person….or well, as real as a drunken demi-god with perfect hair can be….

I don't think it's really a secret to anyone that I've struggled with some of the things in the book myself, I'd be lying if I said they didn't play a part in the narrative. Mark (or "Rez", as we know him) and I have both lost people to the disease and with him being on the road and living the life he's led for the past twenty odd years he's absolutely seen his fair share of bad decisions. I think it just quickly became a story that I not only wanted to tell…but one that I needed to tell. It was a great bit of therapy for me, I absolutely took out a lot of pent up aggression on poor Ruben…

MW: The art's great.  How'd you team up with Geoff Shaw?

DC: Well, I had already wished for a Batmobile and the ability to fly and I had that one wish left….

But honestly it was awesome timing, Geoff and I had gone to school together (SCAD) but never really knew each other (he was one of the cool kids) and then we met again after I had finished my Internship at Marvel and I was able to introduce him to some editors over there at NYCC. I had always had my eye on him but  the timing was never right and the projects were never right for some reason or the other. In the end, his schedule cleared up, I approached him with the idea, he was into it, I showed his stuff to Rez and now here we are… 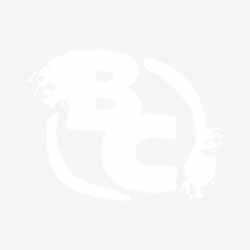 MW: What about the characters? Tell me about where they came from in your imagination and how much if any of them were based on people you know (including yourself)?

DC: Obviously there's some of me in Ruben. I can relate to his stubborn bull headed ways for sure…and he's kind of a sarcastic dick whose mouth gets him in trouble a lot….which, I've been accused of plenty of times. As for the other characters, Dr. Blaqk is one hundred percent based on my best friend and co-writer Eliot Rahal, who's also a stand up comedian and hilarious kooky dude in his own right. I'm very happy to say that I don't know ANYONE like High Guard or Courtland Peirce….man, those guys were jerks..

MW: How soon can I read a damn sequel?

DC: It's funny you should ask that, Mr. Waid! I'm happy to announce that Geoff Shaw and I (along with Dr.Blaqk himself, Eliot Rahal) are reuniting for a big, cool…thing. I'm afraid that's all I'm allowed to say right now but I think people will be very happy with the book.

As an apology for not being able to tell you guys stuff, here's the First Issue of Buzzkill on me!! Please enjoy, tell a friend and tell your retailer you want a copy of the trade, out on APRIL  2nd!!

The Greater Good is a new graphic novel written by Whit Taylor, with art by Joyce Rice about “public health and the policy and infrastructure that

One of the Most Notorious Issues of Crime Does Not Pay, Up for Auction

Crime Does Not Pay #33 is one of the most-collected issues of the most notorious series in comic book history.

There are almost two-thirds of a million copies of BRZRKR #1 out there. So this is just a drop in the ocean. But, nevertheless, Searchlight Comics just

Today sees the publication of Static: Season One, the first ongoing Milestone Comics titles to get back into print after quite some time away, with a bit

Venom #9 by Donny Cates and Ryan Stegman has been a collectible comic book for some time, featuring as it does, the first appearance of Dylan Brock,