Cobra Kai has so firmly established itself as an institution in the streamer era that the Netflix series can hardly do any wrong. Season five shockingly focused far more on the adults than the younger cast for a change, picking up from the season four finale with Terry Silver (Thomas Ian Griffith) emerging at the top of the mountain with his dojo Cobra Kai winning the All-Valley Karate Tournament thanks to his influential ways: bribing the presiding referee. And then later, shedding his partner John Kreese (Martin Kove) by framing him for his own attack on Stingray (Paul Walter-Hauser).

When we find our initial heroes, Daniel LaRusso (Ralph Macchio) and Johnny Lawrence (William Zabka), they're splintered off, with Daniel closing Miyagi-do Karate but enlisting Chozen (Yuji Okumoto) to help against Silver. Johnny is trying to find his student and surrogate son Miguel (Xolo Maridueña) in Mexico. Miguel, who went AWOL during the tournament and as Johnny's champion in Eagle Fang, is seeking his biological father. Joining Johnny in his search is his formerly estranged son Robby Keane (Tanner Buchanan), despite the high schoolers' bad blood.

What's surprisingly refreshing about season five is we see a role reversal between Macchio and Zabka's characters since we're accustomed to seeing Johnny down on his luck and on the verge of relapsing. Daniel's path takes a darker turn, and it kind of parallels what his character went through in 1989's The Karate Kid Part III, but obviously without the Mr. Miyagi safety net. Not that Daniel hasn't dealt with adversity before, but we do see his character beaten far more psychologically than physically than we ever had before, and it's a testament to Macchio's strong performance.

Zabka's journey as Johnny has come full circle since his character is the most mature as he's ever been, and season five feels like his biggest win to date. It certainly helps that he and Macchio don't have to put out fires as they did in previous seasons. Okumoto has a far greater presence in season five than his guest appearances in season three, practically stealing almost every scene he's in. He fits perfectly as the unassuming strong, silent type masking his comedic side so well. Sure, we all knew this from season three, but the writers elevate this to another level. It would be a shame if he didn't return for a season six.

As far as the younger generation goes, Maridueña spreads himself around between Miguel's quest for his father, his ongoing beef with Robby, and rekindling his romance with Sam (Mary Mouser). Robby, on top of his issues with Miguel, is also dealing with the guilt of getting Kenny (Dallas Dupree Young) to go full Dark Side while at Cobra Kai. Sam is primarily dealing with Daniel's struggles, the lack of regular training since the dojo closed, and her ongoing PTSD stemming from the events of the past season.

Tory (Peyton List) is the most involved of the younger cast since she's been harboring the guilt of her tainted victory over Sam at the All-Valley Tournament. From the previews, she tries to clear her conscience to make things right, even turning to her former sensei Kreese, who's incarcerated. One of the few but understandable misses of the season was the abrupt lack of contact between her and Courtney Henggeler's Amanda LaRusso, who she built such a strong rapport with in season four. She does, however, share screen time with Oona O'Brien's Devon, who gets much better character development this season. At the risk of spreading the already loaded season thin, it was a lost opportunity on Tory's path of redemption without Amanda's presence, not even a smidge.

Speaking of the Cobra Kai side of things, we start off with Griffith's Terry Silver, who shines better than expected during his triumphant return in season four. It's poetic since the character was created out of necessity in Part III since Kove couldn't commit to the full schedule. He's one of the most brilliant villains on television because of the design of the series and the way the showrunners provided that foundation of empathy for all their characters. Silver's confrontations focus more on a redirection of Daniel's paranoia against him, letting his opponent fall flat on his face. While we don't really get to know the other sensei, Terry develops a rapport with Alicia Hannah-Kim's Kim Da-Eun, who trained under the same master from the same Korean dojo. Hannah-Kim's Kim is equally as intellectual, calculating, and ruthless as Griffith's Silver.

I wish they developed Young's Kenny more because they didn't give him much to go off aside from hitting the same brick wall interactions as he did with Buchanan's Robby and bullying Griffin Santopietro's Anthony again. He's become the walking cliché of cruelty that Joe Seo's Kyler was regulated to in the first season. At least Kenny's journey was far more nuanced in his introduction last season. Hell, even Jacob Bertrand's Hawk found a path away from the cruelty as slow as it was.

Another underdeveloped plot was Sean Kanan's Mike Barnes. Since Netflix let the cat out of the bag while promoting the series, there was this great weight of expectations that fell on his role for this season. The best thing I can say is that it was probably better left as a surprise when the season dropped. Showrunners Jon Hurwitz, Hayden Schlossberg, and Josh Heald gave him things to do, but it didn't land with the kind of impact that I expected. Overall, it's another stellar season and a home run for Netflix. Macchio, Zabka, Griffith, Okumoto, and List are the brightest stars of season five, which premiered this week. 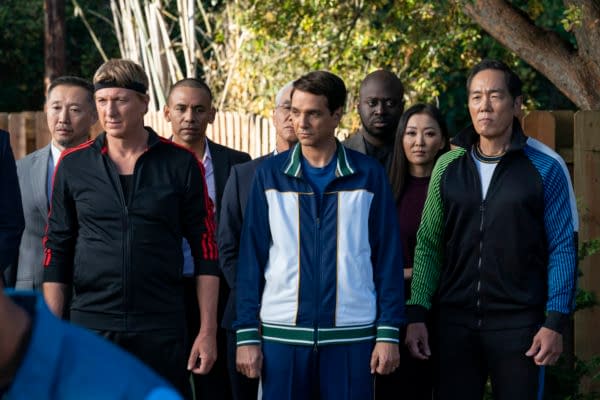 Review by Tom Chang
9/10
Netflix's Cobra Kai Season 5 kicks ass in every important way possible. Ralph Macchio puts in arguably his most powerful performance of the franchise yet. Yuji Okumoto is comedy gold, finding new ways to own pretty much every scene he's in. Thomas Ian Griffith's Terry Silver completely changes how we look at The Karate Kid Part III moving forward, taking the character's rivalry with Macchio's Daniel to intensely deep levels. Sure, I had some minor gripes but overall? Can't wait for Season 6!
Credits
Creators
Jon Hurwitz, Hayden Schlossberg, and Josh Heald