The Head of the Class episode "The Escalante Minute" focuses on two fronts. The first sees poetry being read by Elliot (Jorge Diaz) during his PA segment, which also happens to be the title of the episode and embarrassing its winner Sarah (Katie Beth Hall) as she storms into his broadcast to cut it short. You know, because as the principal's daughter, she's free from repercussions? The second involves the observation from Miles (Adrian Matthews Escalona how his peers are more passive-aggressive than usual refusing to directly act with one another outside of their phones. He proposes a friendly wager with Makayla (Jolie Hoang-Rappaport), Robyn (Dior Goodjohn), and Luke (Gavin Lewis) as a show of solidarity to give up their phones for a week.

Asking that of Gen Z'ers, who grew up on the tech is likely an exercise in futility to which Makayla already failed out of the gate. Anything to fill out time, I suppose since it's an exercise in self-control. Meanwhile, Alicia (Isabella Gomez) is cognizant enough of her own meddling to provide a teachable moment to Elliot about being less like her on intervening. The poem still creates a mystery from Alicia as well as Terrell (Brandon Severs), who is still interested in her.

The crux of the episode is the dynamic between Escalona, Goodjohn, and Lewis, and how a friendly challenge turned into manipulation and borderline sociopathic tendencies. All of this while also showing once again how being overly competitive combined with resentfulness can be a recipe for disaster. As per the rest of the series, it follows the typical sitcom cliché of an otherwise confident character opening up in a way that wasn't meant to be seen or heard and the rest of the characters misinterpreting those said words. "The Escalante Minute" doesn't really say much of anything most of us don't already know about our feelings and ultra-dependency on technology as an escape. It's another typical slice-of-life episode, take it or leave it. I'm fine with either, but leaning a bit more towards the latter. Head of the Class is available to stream on HBO Max.

Head of the Class Season 1, Episode 7 "The Escalante Minute" 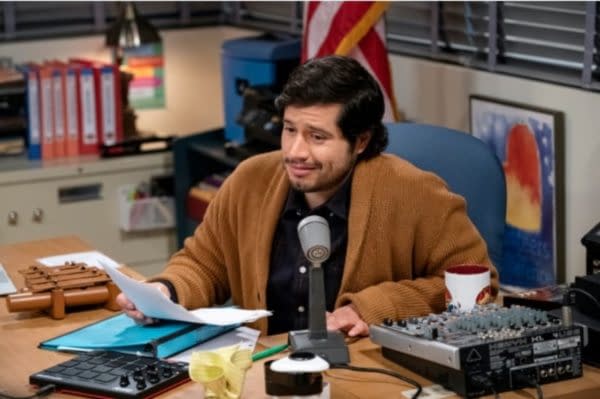 Review by Tom Chang
4/10
HBO Max tried offering a well-meaning episode of Head of the Class in "The Escalante Minute," where people are forced to confront their feelings as well as their fears of being away from their phones & confronting someone with insecurities. The effort was there, but the execution left a lot to be desired.
Credits
Director
Phill Lewis

Gangs of London, the hit Sky series co-produced by AMC Studios in the US, has been given the green light for a third season.