In the sixth episode of Head of the Class titled "All We Do Is Win", Alicia's class (Isabella Gomez) is entering the home stretch preparing for their upcoming school debate against a rival that also happens to be a juggernaut. She learns that passing off her overconfidence and at times, manic ways have rubbed off too well on her students as her colleague Elliot (Jorge Diaz) notices. As they pair off and continue practicing, Luke (Gavin Lewis) sees the opportunity to assert himself running for office for school treasurer with the help of Miles (Adrian Matthew Escalona) and Makayla (Jolie Hoang-Rappaport).

Why Head of the Class Teacher Alicia Sounds So Familiar

Luke quickly finds out it's much easier said than done on the campaign trail even getting the point of seeking endorsements of certain other students. As Elliot tries to stress to Alicia how much more important to be their teacher than be their friend offering more rounded critiques than showering blind praise, we learn the consequences, more so than ever the problems of trying to be liked by everyone. It's kind of eerily reminiscent of another eager-to-please character in John "JD" Dorian on Lawerence's Scrubs, played by Zach Braff

We're seeing a higher level of importance being placed upon Diaz's Elliot, who seems to be the only consistent responsible figure at the school. I'm also enjoying Katie Beth Hall's Sarah gains a more significant presence with each episode showing that she's getting some of the best one-liners next to Escalona. She's definitely her TV mom's daughter.

Dior Goodjohn's Robyn is also coming more to her own becoming a grounding influence to Alicia while showing how well she wears her stoicism like a badge. The cast is starting to mesh better developing more into their own as overachievers. It's better-than-usual when compared to recent outings, and hopefully, a sign that the show is beginning to hit a nice creative groove. Head of the Class is available to stream on HBO Max. 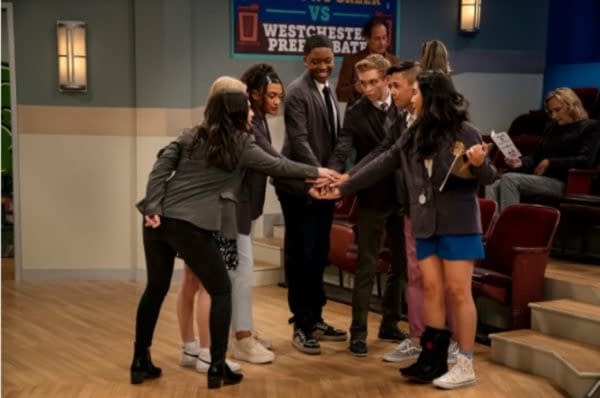 Review by Tom Chang
7/10
HBO Max's Head of the Class is slowly beginning to feel like it's getting comfortable in its own skin. The cast is meshing better with each episode and characters' story arcs actually feel like they're going somewhere.
Credits
Director
Phill Lewis

Fleishman Is in Trouble: Maxim Swinton on Stumping Eisenberg & More

After six seasons of Adult Swim's Rick and Morty, Rick's ready to tackle his worst arch-enemy. But is he really as ready as he thinks he is?