The season 2 finale of Freeform's Motherland: Fort Salem approached way too fast, and it was a wonderfully put-together explosion of awesome and a rollercoaster of feels. The episode flew by and at no point did it feel rushed. It gave us a perfect mix of action, loss, sadness, and hope… hell, even a smile here and there. It also gave us enough answers to tie some loose strings and enough to build upon for the third and final season. This was hands down, the best episode of Motherland so far. Honestly? It had me yelling at the screen the whole time.

Well, General Alder (Lyne Renee) steps down and shit hits the fan. I know we knew it was coming, but man was it surprising nonetheless. Motherland: Fort Salem did not pull any punches and definitely went balls to the wall with this episode. They went directly for all of our heartstrings. Not often does a show make me feel so much, but Motherland was precise in its attack– there was probably a tear or two that escaped before I could realize, but I will never confess to it publicly. Anyway, the episode takes us on an emotional journey and gave our witches a better sense of their own mortality as war breaks between the Camarilla and the witches; with the military fighting alongside The Spree.

The Camarilla unleashes the witches plague and things turn pretty grim. Turns out: we all saw it coming, the idiot Vice-President used his own daughter as a sacrifice. This part was so insanely sad, the air got caught in my throat. Raelle (Taylor Hickson), Tally (Jessica Sutton), and Abigail (Ashley Nicole Williams) did a great job at using their powers in fighting back, locating the source of the plague, and ending it. While it was the right thing to do, it still did not make it easier. I really liked that they could not celebrate because of the mental toll of having to sacrifice their friend took, especially with Tally. Something I have really liked about Motherland this season is seeing our heroines deal with the trauma of what they had gone through. While not always easy to watch, it says something about the good writing on it. However, I loved seeing the respect and understanding they got from their fellow sisters no matter how short-lived. I feel it really helped bring all witches closer.

The witches really suffered big losses due to Camarilla's attack. Most of all, Alder- this one really hurt. Even though we all knew she was no saint, she still became one of my favorite characters. I love the Alder-Anacostia (Demetria McKinney) duo, so it was a pretty heartbreaking scene when Anacostia said her goodbyes… when they all did for that matter. There is something about Anacostia's badassness that hit extremely hard when she broke down. That said, while I was not glad about the turn things took, I was glad to see Petra's (Catherine Lough Haggquist) ego was kicked down a notch and when faced with having her hero daughter about to get tried by muggles she suddenly became much more likable and badass. And talking about badass: can we talk about Khalida (Kylee Brown) and her freaking power? She turned a dude into an inside-out volcano.

I really loved how this episode of Motherland: Fort Salem really brought all witches together and fighting side by side. Now that the Vice-President and his lackeys at the Camarilla are blaming Raelle, Abigail, and Tally are taken into muggle custody along with Nicte (Arlen Aguayo-Stewart). After a really bad meeting with the President, the witches move into action mode and rally the inside troops to bust them free setting a great foundation for the upcoming last season. That, along with what seems to be Alder and the Mycelium coming to life at the end were a great touch. I cannot wait to see what they will have in store for us next season. 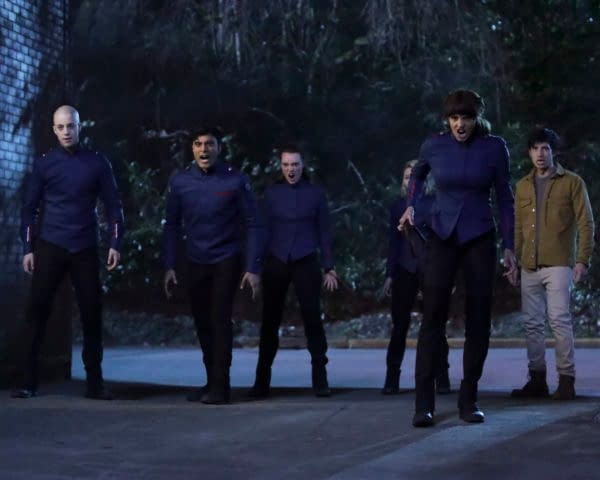 Review by Alejandra Bodden
9.5/10
The second season finale of Freeform's Motherland: Fort Salem approached way too fast, and it was a wonderfully put-together explosion of awesome and rollercoaster of feels. This was hands down, the best episode of Motherland so far. Honestly? It had me yelling at the screen the whole time. The episode flew by and at no point did it feel rushed. It gave us a perfect mix of action, loss, sadness, and hope... hell, even a smile here and there. It also gave us enough answers to tie some loose strings and enough to build upon for the third and final season.

This week's episode of Crunchyroll's Spy x Family, S01E22 "The Underground Tennis Tournament: The Campbelldon," was not kind to Twi/Yor stans.

This week's episode of My Hero Academia, S06E10 "The Ones Within Us," kept the season's momentum going as the danger reached new heights.

AEW is headed to Los Angeles in the new year, and last night on Dynamite, Britt Baker challenged Saraya to a match at the show.

With James Gunn now co-head of DC Studios, maybe now would be a good time for him to talk Watchmen Season 2 with Damon Lindelof.

FTR failed to win the AEW Tag Titles from The Acclaimed on Dynamite, but for a consolation prize they got a dog collar match with The Briscoes at Final Battle.