Little Lulu is being reinvented in an manga style for the Brazilian market.

Little Lulu was a comic strip character invented by Marjorie Henderson Buell in 1935 for a series of comic gag panels that ran until the end of 1944. Revived to sell tissues in advertising campaign, Little Lulu returned as a comic strip in 1950, and a comic book made famous by John Stanley and Irving Tripp ran until the early nineteen eighties as her popularity waned.

In America that was.

In Brazil, they had to commission new work featuring the character for over another decade, ensuring that the character is better known south of the Americas than North,

As you can tell, the child characters from the strip will be increased in age to teenagers and portrayed in a manga style. A similar approach was taken to the recent MONICA'S GANG revamp in Brazil, and keen publishers seek to imitate that title's success.

One wonders what the Simpsons' version of Alan Moore would think of it all. 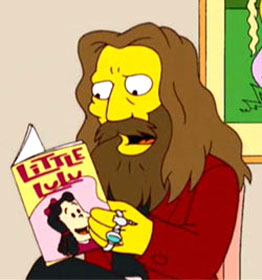