"BATWOMAN BEGINS" parts one and two! This special two-part interlude spotlights team leader Batwoman! In the wake of the "Night of the Monster Men," A.R.G.U.S. has built a secret research city around the corpse of the megamonster that collapsed in Gotham Harbor…creating Gotham City's newest and most dangerous neighborhood, Monstertown!

In issue #948, Batman and Batwoman need to get in there to find out who's been weaponizing monster blood—but who will they have to fight through to do it?

The deadly secret behind the newly risen Joker is revealed, and it's about to shake up Terry McGinnis' world! Terminal has been using the existence of the Clown Prince of Crime to set himself up as the leader of the anarchic gang of Jokerz, but this new revelation may even put his own criminal empire in jeopardy. This is a turning-point chapter in the life of the Batman of the future.

"Cold to the Core"! Batman travels to Alaska to confront Mr. Freeze as he attempts to extract the world's oldest ice core and bring humanity to a new Ice Age! Powerhouse artist Jock joins Scott Snyder to bring you another of the Dark Knight's rogues like you've never seen him before.

Written by JOSHUA WILLIAMSON—Art and cover by CARMINE DI GIANDOMENICO—Variant cover by DAVE JOHNSON
"ROGUES RELOADED" part one! Central City is quiet…a little too quiet. Which means one thing: the Rogues are up to something, and only The Flash can stop them! But first Barry Allen needs to track down his classic cadre of villains, who've vanished in advance of their greatest plan ever. Plus, artist extraordinaire Carmine Di Giadomenico returns!
On sale JANUARY 11 • 32 pg, FC, $2.99 US • RATED T

Written by SIMON OLIVER—Art by PIA GUERRA—Cover by JOHN CASSADAY—Variant cover by YASMINE PUTRI
"THE POISON TRUTH" part six! In London, Marid is selling the assembled underworld on his plans for humanity. On a train to Paris, Mercury relives her time in the Creator's realm she visited—and she's hoping she avoids death this time as well.
On sale JANUARY 25 • 32 pg, FC, $2.99 US • RATED T+

Written by HOPE LARSON—Art and cover by CHRISTIAN WILDGOOSE—Variant cover by FRANCIS MANAPUL
"Son of Penguin" part one! Babs is back in Burnside! But everything's…different—friends, school, even Burnside itself. Batgirl must determine her next steps when she realizes that the shady new tech mogul moving into her neighborhood is none other than the estranged son of the Penguin!
On sale JANUARY 25 • 32 pg, FC, $2.99 US • RATED T 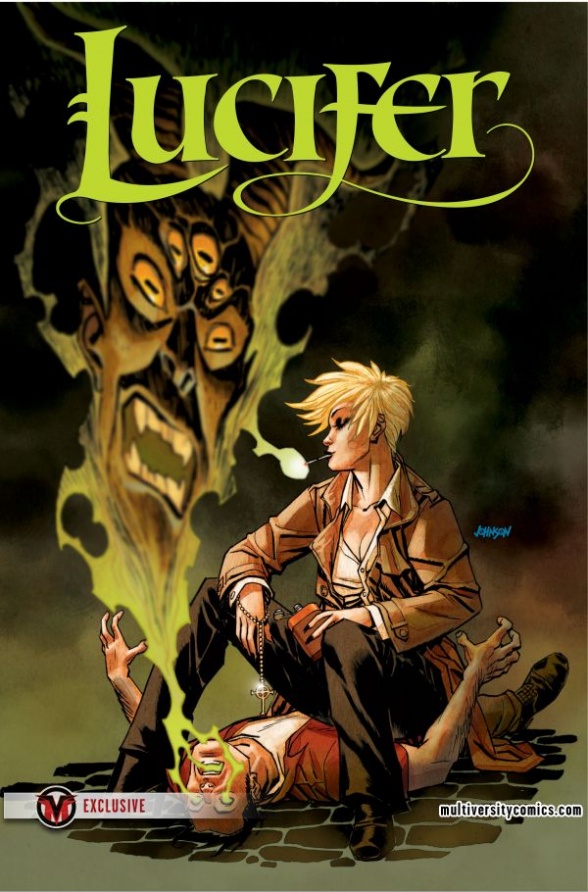 Welcome to a grave new world. Heaven and Hell are in expert hands as New York Times best-selling author and dark fantasy veteran Richard Kadrey grabs LUCIFER by the horns in his first full-length issue of many more to come. Now's the time to get on board as series favorites get a twisted fresh start and make the acquaintance of some new black hearts. 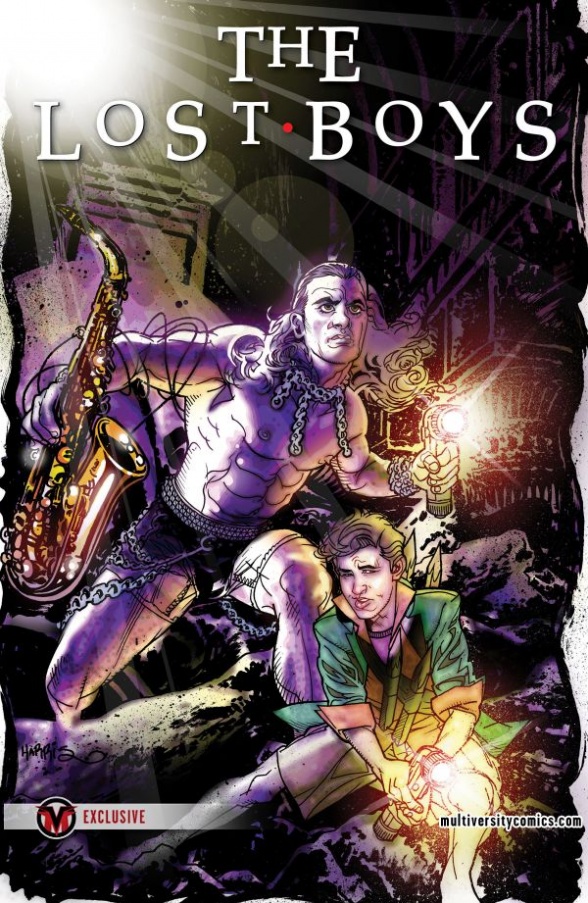 Star has rejoined the vampires, the Frog Brothers are M.I.A. and David's kidnapped Michael to appease the Blood Belles. It looks like it's up to Sam and the mysterious musical muscleman known as the Believer to save the day. Those dirty bloodsuckers better get ready for some sweet tunes! 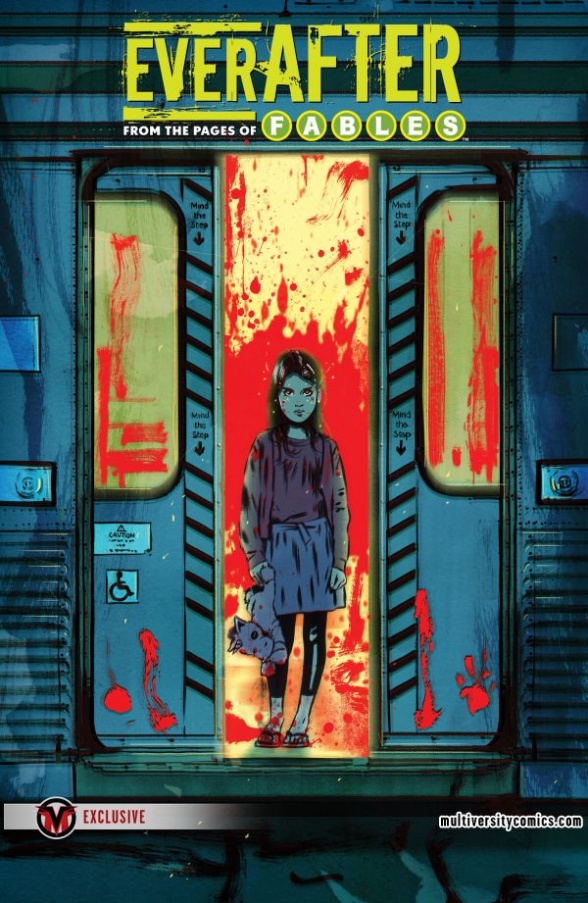 EVERAFTER: FROM THE PAGES OF FABLES #5
Written by DAVE JUSTUS and MATTHEW STURGES
Art by TRAVIS MOORE
Cover by TULA LOTAY

Bo's hunt for Jordan gets bloody! Meanwhile, it's damage control for the rest of the Shadow Players as San Francisco is under siege by a horde of enraged and undead warriors. Desperate to stop an imminent Mundy massacre at the hands of this ghost battalion, Feathertop is forced to make a bargain with potentially disastrous consequences. 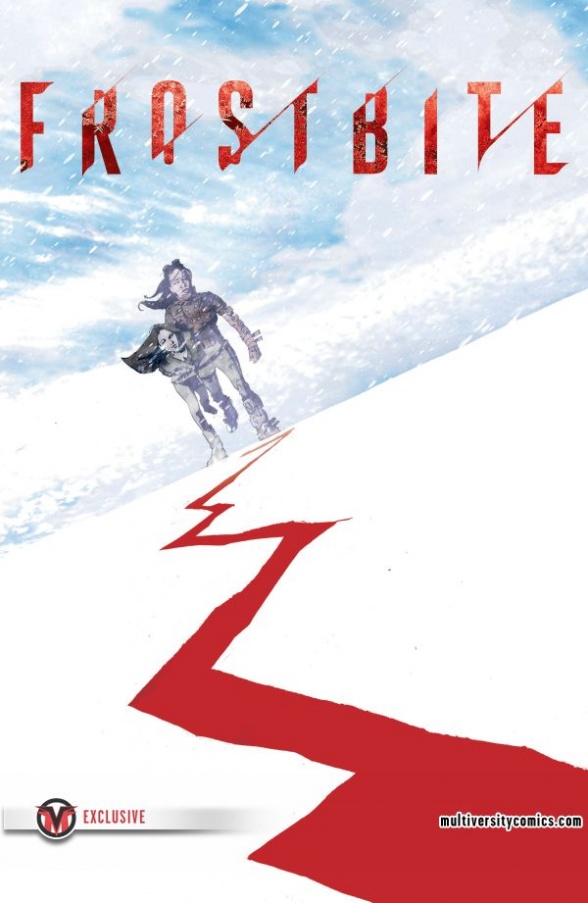 Keaton and Vic are coming to the end of the road…but it's not the end they had planned. Their destination was Alcatraz, but when Keaton's darkest secret is revealed by her worst enemy, the deadly crime boss El Fuego, she'll find herself left out in the cold. 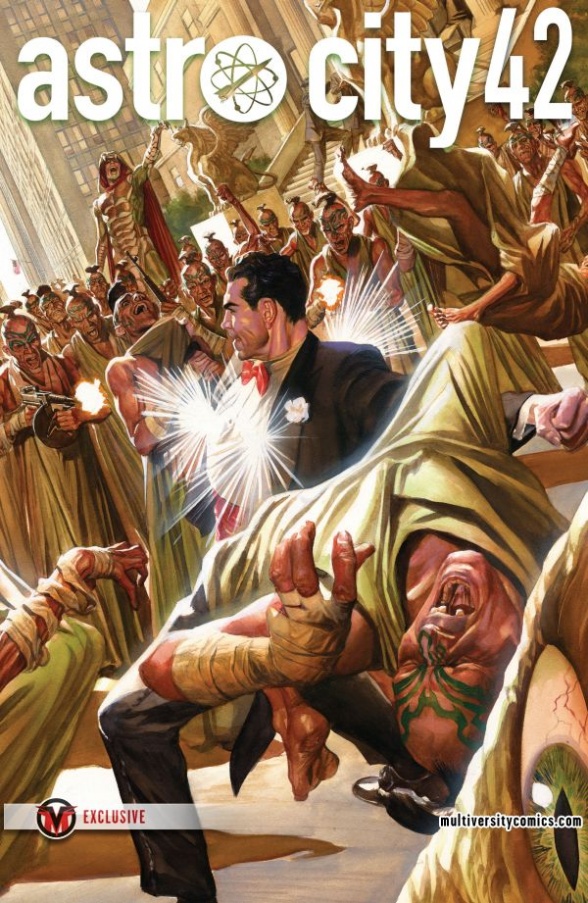 At long last, it's the origin of the Gentleman! Lord Saampa and his Serpent Cult strike in the US…but are they here to serve their scaly god, or to save a soul? And either way, can the Gentleman stop them? Plus: Another incarnation of Astro City's counterculture champions—this time, one you've seen before!

THE ODYSSEY OF THE AMAZONS #1 by Kevin Grevioux and Ryan Benjamin.

A brand-new miniseries set in the world of Wonder Woman from writer and actor Kevin Grevioux (New Warriors, Underworld) and artist Ryan Benjamin (BATMAN BEYOND). Years before the birth of Princess Diana, a group of Amazons set out on a globe-spanning quest to find others of their kind, encountering legendary creatures and beings along the way. But their journey soon turns into a rescue mission as two of their own are captured by the legendary Storm Giants of Norse mythology. It's up to their leader, the stalwart Hessia, to keep them together through the many trials that lie ahead. The series will run for six issues. January 4th.

THE FALL AND RISE OF CAPTAIN ATOM #1 by Cary Bates, Greg Weisman and artist Will Conrad

A new miniseries from the writing team of Cary Bates and Greg Weisman (CAPTAIN ATOM) and artist Will Conrad (Buffy the Vampire Slayer). Bates and Weisman return to the character with "Blowback: Part One"! Captain Atom hasn't been seen or heard from in years—and even if you think you know what happened to him…you're wrong! But you're not alone. To this day, no one on Earth—not even the other superheroes—has an inkling of the missing Captain Atom's true fate. At last, the truth is about to be revealed in a saga that transcends not only the meaning of life and death, but the limits of time and space. The series will run for six issues. January 18th.

"MULTIPLICITY" part one! The New Super-Man of China has been taken! The Red Son Superman of Earth-30 has been beaten! And who knows what's happened to Sunshine Superman! Someone is collecting Supermen across the Multiverse—this looks like a job for our Kal-El as he is joined by Justice Incarnate in this multi-Earth epic!

Supergirl is all that stands in the way of total destruction—but with the clock ticking and the stakes rising she'll need more than just brute force. She'll need the help of…Cat Grant?

"Home Sweet Home"! A new threat brings Wally West face to face with the Man of Steel, and the two recognize each other as kindred souls from another world. Plus, the Titans set up their new Tower in New York City!

What mysteries are hidden in the book Ra's al Ghul just hired Catwoman to steal? And why does this caper lead Batman down memory lane—to his childhood fight against actual Nazis?! Witness his first encounter with one of the greatest heroes the world has ever known: Wonder Woman!

JUSTICE LEAGUE OF AMERICA: THE ATOM #1
Written by STEVE ORLANDO
*Artist to be revealed!
Cover by IVAN REIS and JOE PRADO and MARCELO MAIOLO
One shot • On sale JANUARY 4
32 pg, FC, $2.99 US • RATED T

THE ATOM. Meet Ryan Choi, prodigious theoretical physics student, hyper-allergic, and crippling social anxiety sufferer. But little does young Ryan know, his first day at Ivy University will begin an epic journey that will take the all-new Atom into the very heart of the DC Universe.

VIXEN. She's one of the country's most successful businesswomen, an iconic fashion pioneer, a crusader for social justice, and an incredibly powerful member of the Justice League of America. But Mari McCabe life wasn't always this way. Follow her path to becoming the heroic Vixen in this crucial special!

THE RAY. Locked indoors, raised in the dark, and told his medical condition could be fatal to himself and anyone he meets, Ray Terrill is dangerous. A freak. Broken. Or is he…? Witness the amazing power of realizing your true self and stepping into the light in this moving DC Rebirth of a long lost hero for a new generation.

KILLER FROST. What happens to a supervillain on their last day in Belle Reve Prison? Against all odds, Killer Frost is up for parole from the Suicide Squad, but you can bet Amanda Waller isn't going to make it easy for Frost to take her place on the new JLA.

The KAMANDI Challenge consists of 12 teams, where one writer and artist are paired randomly and assigned one of 12 sections of Earth A.D., the post apocalyptic world inhabited by Kirby's young hero, Kamandi. The first team begins the story in one section, while the last team ends the story in the same location. Each issue will take readers to a different portion of Earth A.D., and all teams are working completely independently of each other, so they have no idea what stories are being written. Some parts of Earth A.D. were fully developed by Kirby, while others weren't, and it's up to the talent teams to create fantastic stories worthy of Kirby's character and the world he created.

DEATHSTROKE #11
Written by Christopher Priest
With input from Milestone
An anti-violence storyline about gun deaths in Chicago. Featuring Deathstroke.

DETECTIVE COMICS
Written by Marguerite Bennet and James Tynion IV
"BATWOMAN BEGINS". The arc will set the stage for Kate Kane's solo series, and center on Batwoman and Batman discovering that the venom used to defeat monsters' corpses during the events of the "Night of the Monster Men" storyline is being sold as a bioweapon.