WARNING: Possible mild spoilers to those outside the UK who haven't seen the last three episodes of this season.

So another season of DOCTOR WHO has ended with the show in rude health, and more importantly, in the capable hands of a showrunner everyone wanted to be in charge after Russell T. Davies left.

When a show runs for more than two seasons, it's inevitable that it starts to reference itself. It seems to be part of the nature of stories to start to be in dialogue with each other, especially when they're part of the same series.

Moffat's run has to play in fields that Davies tilled because it was Davies who established the template that the new show runs from. It was Davies who chose to turn up the volume on the emotions where the show used to treat them as an afterthought back in the 1960s and 1970s. He also had a stronger grasp of themes and ideas than the show did in the old days so that it became more knowing and consistent.

Based on his body of work, you could say that Davies is an old school political activist at heart in his belief that TV drama can change people's perceptions. You can see this in his work before WHO, in shows like QUEER AS FOLK, MINE ALL MINE and THE SECOND COMING. When he took over WHO, he grounded the show in the social realities of multicultural, slightly downbeat 21st Century Britain, made the first new companion Rose Tyler a working class Cockney living with a single mother in a London council estate. He was actively waging a war to push Young British kids out of the drab realities more than 15 years of mediocre TV drama and reality shows had trapped them in and encouraging them to use their imaginations and expand their minds, to consider the possibility that wonders and horrors could be found underneath the seemingly banal and drab facades of everyday life. He clearly pushed an agenda to celebrate racial and cultural diversity as well as gender and sexual tolerance. This hasn't exactly been subtle, but then activism can't afford to be subtle lest it ends up unnoticed and ignored. You can see the culmination of his political fire in the anti-government ire of TORCHWOOD: CHILDREN OF EARTH.

I see Moffat more as an entertainer than a social activist, and after five years of Davies' WHO, it was clear that Moffat would have to forth his own tone and direction for the show. Superficially Moffat is still working in the same format that show established back in 1963: The Doctor and companion show up somewhere, discover trouble and sort it out. He's also working with the format
Davies established: the female companion's arc, the emotional nature of the Doctor and companion's relationship, a season-long plotline that leads to a big pay-off at the finale. Beyond that, Moffat has started to subtly reshape the show.

Davies wrote David Tennant's Doctor from the biggest smart aleck in the universe to basically a god, as seen when he resurrected himself from the everyone's faith in him to save the world. I thought that was an interesting contradiction: for a passionate atheist, Davies showed himself to be a rather Anglican one. So where do you go when your predecessor has spent four-and-a-half series portraying the hero as a god and then ends with the fall of the lonely god? Why, you take him in a slightly different direction, shift the theme a little bit to the side, of course. You make it a fairytale.

Moffat's Doctor plays down the godliness. He's more fallible, less sure of himself, more reactive to events, even if his reactions are genius improvisations that save the day, continuing the dynamic of the character established way back in the Sixties. Moffat's Doctor isn't a god but a good wizard. An old, mad wizard who's forgetful and out-of-synch with everyone else, but who comes through with the goods in the end. Amy's observation in Moffat's second episode is key: the Doctor is a being so old and lonely, the last of his people, for whom kindness is now what matters most, and most of all, kindness to children. It may sound corny, but this is a family show aimed at children first, and therefore it's crucial for the hero to be a friend to all children. That is the nature of fairytales. They provide comfort from the horrors of death, and the good wizard always has one
last spell up his sleeve.

Moffat has been more explicit about DOCTOR WHO being more fairytale than Science Fiction. With fantasies and fairytales, you can get away with some nebulous device or idea working just because you say it does. The more interesting thing for me is the way Moffat wants to bridge the gap between childhood and adulthood to reinforce the relevance of stories and fairytales for everyone, not just kids. That doesn't mean he's neglected the adult parts of the show – if anything, he's pushed some of it a little further: Amy worked as a kissergram, which is really code for "stripper", she explicitly tries to have sex with The Doctor, not just a snog, the episode with Vincent van Gogh didn't just provide a crash course in Art Appreciation but also dealt directly with van Gogh's tragedy, a death even The Doctor couldn't prevent because he can't cure what we now know as debilitating bipolar disorder. Fairytales are stories for teaching children to consider and cope with death. They frequently deal not just with safe ways to explore danger and fears, but also death and loss. The loss of parents are a primal fear for children and that turns out to be the biggest wound carried by Amy Pond all along. And here Moffat follows the fairytale's credo of not just coping with death and loss, but defeating and transcending them as well. The good wizard puts everything right at the end. For everyone. And why not? Might as well when the hero of the show is its own deus ex machina. And since the show is now about stories and their significance, it's entirely fitting that Moffat has commissioned Neil Gaiman to write an episode for next season. 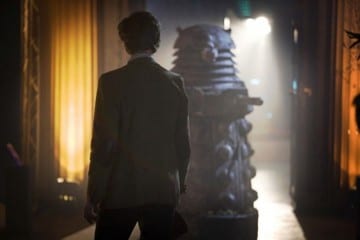 The only possible drawback to the need to have a big cataclysmic, deus ex machina climax at the end of every series is the law of diminishing returns. It's not easy to keep topping the previous year's grand finale and keep them fresh without the viewers getting jade and going, "Here we go again." That's the real challenge Moffat faces now.

And this is not really the first time DOCTOR WHO explored the theme of being in a story. That was first played with by Gareth Roberts in the 1990s when he wrote WHO novels for Virgin Books. In fact, so much of the current series has been influenced by the Virgin novels that it's worth talking about them, which I will do next week.