Bleeding Cool ran the well-sourced rumour a few months back that Image Comics is planning the return of the shared superhero universe that kicked off the publisher back in 1992, with Spawn, Savage Dragon, Youngblood, WildCATS, Cyberforce, Shadowhawk, Wetworks and more. We noted that WildCATS is back to being part of the DC Universe, and Youngblood has been sold off to someone who has their own plans… but we understand that some other Image Comics titles be playing along.

We already told you that Kieron Gillen, Jim Rossignol, and Jeff Stokely's Ludocrats #1, out in the US today and in the UK in a week's time would reveal a cameo appearance of Matt Fraction and Gabriel Ba's Casanova popping up, disguised as a sexy dinosaur. We have it in better resolution now, as well as the event being labelled for what it is.

It's perfectly in keeping with the madness of the Lucocrats worlds, an anything-goes half-way house between Grant Morrison, Sergio Aragones, Kevin O'Neill and Evan Dorkin that reeks of fun. Kieron just posted the following script in his newsletter as a tiny smidgen of how he works with the creative team.

And here is that small segment.

But what about that crossover moment? We may have chalked that up to just Kieron Gillen giving a subtle shout to Matt Fraction from across the pond… But then we got a sneak peek at Matt Fraction and Terry Dodson's upcoming Adventureman #1 now for June 10th, and spotted a possible cameo of… Lady Hellaine from Mirka Andolfo's Mercy #1. 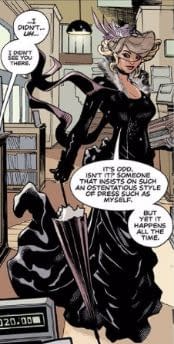 Both of these surfaced in Image's 2020 #1s. Other places to look would be Protector#1, After Realm #1, On The Stump #1, Tartarus #1, Decorum #1, Nailbiter Returns #1, The Goddamned: The Virgin Brides #1, That Texas Blood #1… and more to be announced on Friday. Has anyone else spotted one of these? Send us a tip at richjohnston@bleedingcool.com.

LUDOCRATS #1 (OF 5) CVR A STOKELY (MR)
(W) Kieron Gillen, Jim Rossignol (A) Tamra Bonvillain (A/CA) Jeff Stokely
SERIES PREMIERE! The Ludocrat! The ludicrous aristocrat! A collision of the ornate fantasy of Dune and an M-rated Asterix & Obelix! Baron Otto Von Hades and Professor Hades Zero-K are here, and they're going to save us all have a nice time. KIERON GILLEN (DIE, THE WICKED + THE DIVINE) and JIM ROSSIGNOL (Sir, You Are Being Hunted) write! JEFF STOKELY (The Spire) draws! TAMRA BONVILLAIN (Once & Future) colors! Clayton Cowles (BITTER ROOT, DIE) letters! The universe screams in pleasure, writhing, finally satisfied, complete, joyous!

ADVENTUREMAN #1
(W) Matt Fraction (A/CA) Terry Dodson, Rachel Dodson
SERIES PREMIERE! A CATACLYSMIC ADVENTURE DECADES IN THE MAKING!
In this WILDLY AFFORDABLE TRIPLE-LENGTH FIRST ISSUE, revisit how the legend of the greatest pulp hero of them all, ADVENTUREMAN, ended in a heartbreaking CLIFFHANGER with our hero facing execution at the vile hand of his ultra-nemesis BARON BIZARRE on the eve of the MACABRAPOCALYPSE…or did it?!? Eighty years after his apparent demise, single mother Claire and her Adventurefan son Tommy seem to be the only two people alive that remember the thrilling ADVENTUREMAN sagas…but from that memory burns THE SPARK OF RESURRECTION! WHERE HIS STORY ENDED…HER STORY BEGINS! This sense-obliterating, earth-shaking, imagination-quaking adventure that spans generations comes to you from MATT FRACTION (SEX CRIMINALS, Hawkeye) and TERRY & RACHEL DODSON (X-Men/Fantastic Four, RED ONE)!!!