We were given the tease in Marvel's July 2019 solicitations, Frankensteined over here… that Rocket Raccoon may be coming to his end. 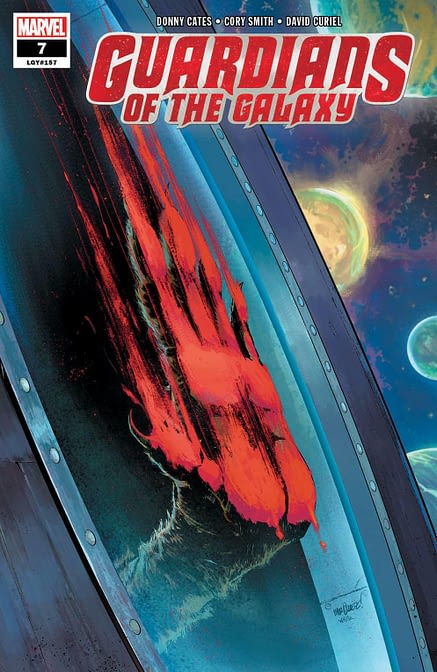 GUARDIANS OF THE GALAXY #7
Written by Donny Cates, art by Cory Smith, cover by David Marquez
The Death of Rocket begins here!

In the aftermath of the FINAL GAUNTLET, the Guardians of the Galaxy are taking some well deserved R&R. But their vacation is about to be cut short when a familiar, but radically powerful enemy returns. And what does all of this have to do with the whereabouts of a certain raccoon?

Well in today's Guardians Of The Galaxy #4, we see a Rocket Raccoon in hiding from an unknown threat that Gamora is defending him from.

And in Avengers; No Road Home #10, we see the preparations he is making… making things right before…

…it's not going to be pretty is it? How wants a Rocket fur scarf? Anyone?

GUARDIANS OF THE GALAXY #4
(W) Donny Cates (A) Geoff Shaw (CA) David Marquez
THE DARK GUARDIANS!
•  The Dark Guardians, a new cosmic hit squad made up of the most powerful and cunning people in space, are going to kill Gamora.
•  It's time for the new Guardians of the Galaxy to saddle up!
Rated T+In Shops: Apr 17, 2019
SRP: $3.99

BTW, no, an Avenger won't die in the attempt. Not yet anyway…