"Blue Flu," the third episode of the 8th and final season of NBC's Brooklyn Nine-Nine, revisits police corruption which in this case has an incident involving a police officer claiming a restaurant purposely put a dead mouse in his food. In response, uniformed officers including those from within the Nine-Nine, stage a silent protest under the false pretense of medical leave. Capt. Raymond Holt (Andre Braugher) tries with his senior officers Lt. Terry Jeffords (Terry Crews), Sgt. Amy Santiago (Melissa Fumero), and detectives Jake Peralta (Andy Samberg) and Charles Boyle (Joe Lo Truligo) to investigate this "blue flu".

To fit the theme of the final season, Charles gets some dire news as shown in the trailer and we get a rare emotional moment that evokes appropriate feels even with his continued lack of understanding of double entendres. Most of the two's exchange, you have probably seen in the final season trailer. It largely detracts from the progress of Terry and Amy's investigation which for some reason we ironically get an arc comparing Terry's gastrointestinal issues to his masculinity. We get more of John C. McGinley's Frank O'Sullivan and his smarminess with the "us vs. them" mindset.

Why Not Madeline Wuntch in Brooklyn Nine-Nine?

It feels like the interaction between the two is almost an exercise of futility where we're seeing more of a broken Holt in the making. While I credit McGinley for fulfilling the role he's asked to fulfill, it seems like a past nemesis like Madeline Wuntch (Kyra Sedgewick) could have easily fulfilled if the producers didn't decide to kill her character off. Something new to the table is we find out what an army of Hitchcock and Scully's look like when amassed within a conference room. "Blue Flu" was directed by Claire Scanlon and written by Carol Kolb and creators Dan Goor and Michael Schur. It was better than the premiere "The Good Ones", but not as much as "The Lake House". Brooklyn Nine-Nine airs Thursdays on NBC. 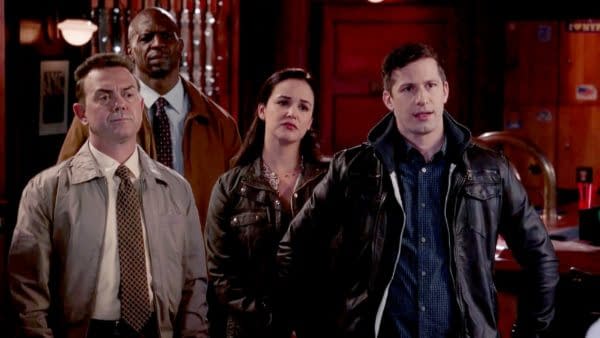 Fleishman Is in Trouble: Maxim Swinton on Stumping Eisenberg & More

With the animated series kicking off its Netflix run on December 15th, here's a look at a new set of preview images for Sonic Prime.

The Always Sunny Podcast Gang was joined by Lin-Manuel Miranda & Cormac Bluestone to honor our favorite episode, "The Nightman Cometh."