NBC's Brooklyn Nine-Nine has been one of the few procedurals in the past that's actually tried to address abuse from within law enforcement, but in the season eight premiere "The Good Ones" as star Stephanie Beatriz's Rosa Diaz says near the end of the episode, "an extreme in the other direction." There are minor spoilers for the episode to establish how the episode means well but tried way too hard with all its arcs.

The first major one is Rosa's sudden disenfranchisement with the institution of law enforcement, which makes her resign her position in the NYPD. While the character embraced her status as bisexual, it makes sense this would be a step her character would take being more proactive in her activism. While writers Dan Goor, Michael Schur, and David Phillips do write her reasoning, it felt so random in place since police brutality has been outgoing, but used George Floyd's murder as the epiphany moment for her. Yes, the character is impulsive like the idea of marrying Adrian Pimento not long into a relationship, but it just feels like her quitting the force over it should have been built up to it given how much of her life has been defined by her career. Meanwhile, Andy Samberg's Jake Peralta is playing catchup along the way throughout probably as confused as many in the audience why his long-time best friend never so much as opened up to anyone or even built up to it.

The comedy was light otherwise with Charles Boyle (Joe Lo Truglio) treating his squadmate Terry (Terry Crews) completely losing sight of any friendship context and turning up the white-guilt angle to 11 with about as many clichés as you can expect. There are cheap awkward laughs that are far lower than the usual hanging fruit of the series that should have done better. The final arc, which is much more attuned to how the show is when Amy Santiago (Melissa Fumero) tries to pry into Captain Raymond Holt's (Andre Braugher) small talk to her. Hitchcock (Dirk Blocker) and Scully (Joel McKinnon Miller) provided their usual dependable bits as expected as does the cold opening between Jake and Charles. At least nothing dramatically changed with them. The big guest star is John C. McGinley who plays Frank O'Sullivan to all the expected notes that kind of wastes his talent as an uncooperative police bureaucrat. It literally felt like the writers had him regurgitate a lesser Dr. Cox rant from Scrubs into the episode. In the end, "The Good Ones" attempts to get the final season running in the wrong direction in its dramatic shift and tries to land blows that audiences can see telegraphed a mile away. Yes, it does shed light on why real law enforcement corruption can't be resolved up in a package similar to a film like Serpico.

The most tragic thing about this episode is that as much as they try to bring attention to corrupt law enforcement and social messages behind it, they did a far better job in the season four episode "Moo Moo" when Crew's Terry was racially profiled by a white beat cop who mistook him for a prowler. "The Good Ones" means well, but it's probably one of the weakest episodes of the series not for the lack of trying to send a message. It was awkward not because of the messages it tried to deliver, but rather its contrived and forced execution. Brooklyn Nine-Nine airs Thursdays on NBC. 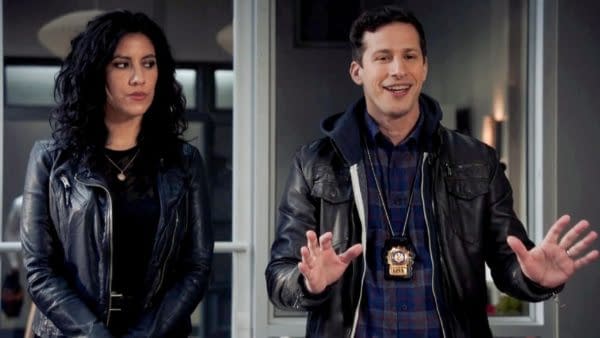 Review by Tom Chang
2/10
Brooklyn Nine-Nine has always been a series that's been able to tackle every issue its faced previous seasons for better or for worse. "The Good Ones" felt like a forced apology for never addressing the issue of police brutality when it did far better in the season four episode "Moo Moo". The series is far more capable than this largely awkward lazy trash.
Credits
Director
Cortney Carrillo

In this mini-preview for Adult Swim's Rick and Morty S06E09, Rick offers Morty a clear advantage: an AI sword with great taste in films.

Remember when Goldberg played the drugged-up criminal Cupid and took out Stabler (Christopher Meloni) on an episode of NBC's Law & Order: SVU?

With the prequel series hitting Netflix on December 25th, here's a look at over two dozen preview images for The Witcher: Blood Origin.