Playing catch up to the Paramount+ supernatural series Evil, the season three premiere "The Demon of Death" picks up where the season two finale left off with an impasse to two of the main characters Kristen (Katja Herbers) and David (Mike Colter) as they try to make sense of their kiss. In her mind, there is lingering guilt in trying to tempt the recently ordained Catholic priest, but in David's mind, it goes far deeper into the wretches of depravity. This is your minor spoilers warning for both episodes.

We get a series of scenes where David constantly plays out scenarios in his head while in his bed, which I imagine provided far more than their fair share of intrigue, particularly for Herbers, playing her character much more mischievously here. The way Robert King & Michelle King become a bit shameless in their teasing is about as on-brand as the series gets to the point of giving Kristen a forked tongue, which fans already know from the trailer. The main story tackled dealt with how the Catholic Church is trying to measure the weight of a soul as the subject (Wallace Shawn), a dying priest under hospice care. Aside from the peculiar set of circumstances from the experiments, we also get Kristen's husband Andy (Patrick Brammall) intent on selling his business and living with the family again. The premiere provided some serious thought-provoking moments about mortality and what happens as people teeter on death's door. Shawn, while always reliable to play such lively characters (no pun intended), flexes serious range by going to the opposite end of the spectrum with displays of disdain and hopelessness.

Evil: The Demon of Memes

The next episode, "The Demon of Memes," is based on the phenomenon known as Slender-Man as teenagers perform a series of tasks to avoid death. There are a few disappointing developments here because a couple of major plot points that showed promise are shunted away to get back to normal narratives. One awkward conversation and some light scheming were all it took. Speaking of scheming, we're two episodes in and we don't really get a sense of what Sheryl (Christine Lahti) and Leland (Michael Emerson) are doing. It felt like both were given scenes to remind us they were still there or out of contractual obligation. The Kings and writer Davita Scarlett still can't tell us anything more about the group the pair are involved with. We did get this throwaway bit where the daughters are onto Leland's predatory attempts at bonding through a mobile game in the premiere episode to give them something to do I guess. I'm hoping this is the beginning of a storyline long game, but right now viewers need to be fed a bit more for them to feel like this is going to matter.

Directed by John Dahl, we get the typical investigative work put in by the main trio of Kristen, David & Ben (Aasif Mandvi) along with solid contributions from the actresses playing Kristen's daughters, Brooklyn Shuck, Skylar Grey, Maddy Crocco & Dayla Knapp. It's more a rinse-and-repeat affair that's consistent and on-brand, but not really ground-breaking. Also in the episode, David is made some sort of "secret Catholic agent" away from his existing group, running errands for Victor LeConte (Brian D'Arcy James). Instead of feeling that would be otherwise compelling, it just feels contrived and a bit too "inspired" by lazy sitcom writing. Lazy how, you ask? When David has to take a call away in secret, everyone else dismisses it like it's the usual "wacky Catholic priest" stuff. "The Demon of Death" is a solid seven that teased the season's potential, but "The Demon of Memes" is a below-average four. New episodes of Evil stream Sundays on Paramount+. 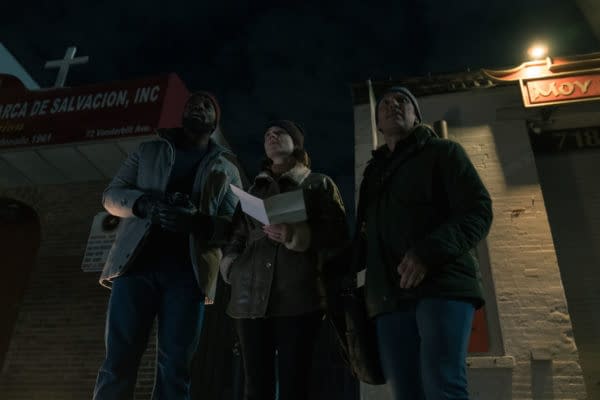 Review by Tom Chang
5.5/10
Paramount+ series Evil Season 3 premiere in "The Demon of Death" starts off so strong, but gets undercut in the follow-up episode "The Demon of Memes", particularly by short-changing two potential major plotlines and some important cast members. Here's hoping that gets corrected before we're too deep into the season. In the premiere, Katja Herbers, Mike Colter, and Wallace Shawn deserve serious kudos for the job they did in setting a strong tone for the series return.
Credits
Directors
Robert King, John Dahl