Evil S03E03 "The Demon of Sex" marked the return of Andrea Martin's Sister Andrea back into the fold, finding herself in a precarious situation that sees her more involved than usual. The beginning of the episode finds David (Mike Colter) presiding over the wedding of Catholic couple Leo (Freddy Miyares) and Amalia (Kayli Carter). They turn to the church in hopes to deal with their own intimacy issues… and from this point forward consider our minor spoilers warning in effect.

The problem at hand is peculiar to both since they're both virgins, but Sister Andrea is finding more sinister forces afoot with the demonic possession of their marriage. As she is the only one who can see the demon (Marti Matulis), she takes notes of their relationship as the couple discovers various issues that prevent them from fully engaging, from mysterious bruises to a persistent itching resulting from close contact… courtesy of the demon itself. It certainly makes for a few awkward conversations that provide for some lighter comedic elements of the series. We see Katja Herbers' Kristen and Colter's David act as "straight men" to the couple's problem while they remain oblivious to the demon's antics.

The second arc concerns Sheryl (Christine Lahti), who's tasked by Leland (Michael Emerson) to make the fictional cryptocurrency Makob (pronounced "macabre"…get it?) a success. He gives her a staff of millennial snobs led by Taylor (Alexandra Templer), who's tasked to spy on her. We hit on all the office politics clichés (yup, The Devil Wears Prada) on full display checking off the list of predictable walking narcissistic trash. Sheryl goes through the motions that anyone becoming an alpha dog with half a brain could see coming.

The third storyline focuses on Ben (Aasif Mandvi), who goes through a depressive episode to the point where his sister Karima (Sohina Sidhu) has to step in to remind him that his life isn't meaningless. The latter two arcs serve as distractions to an otherwise cerebral standoff between Sister Andrea and the sex demon. Directed by Nelson McCormick and written by Aurin Squire and the Kings, Martin and Lahti shine brightest in their natural elements with both characters demonstrating stoic patience and an understanding of their characters & the situations that they're in to know when to strike at their foes with reserved tenacity. New episodes of Evil stream Sundays on Paramount+. 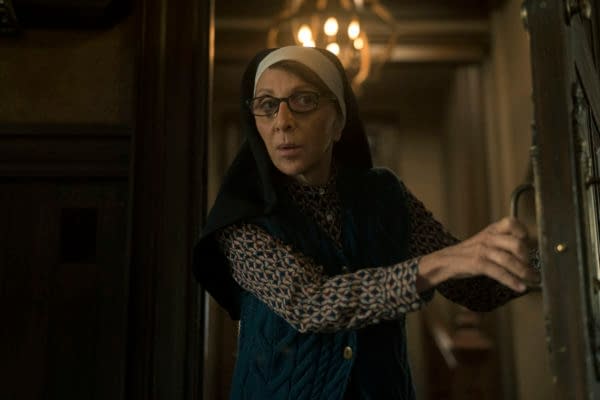 Review by Tom Chang
7/10
While the latest episode of Paramount+'s Evil in "The Demon of Sex" focused on tackling cryptocurrency and influencers on social media, Christine Lahti makes it work wonderfully in a Wolf of Wall Street meets Devil Wears Prada fashion. The core storyline with Sister Andrea vs the sex demon works thanks to the performances from Andrea Martin and Marti Matulis. That being said, it feels like the show tries too hard to remain topical which potentially makes it look dated down the line. Also, Aasif Mandvi deserved much more to do in this episode and definitely a better continuing of a storyline that has potential.
Credits
Director
Nelson McCormick

The Sandman E01 "Sleep of the Just": From Comics to Screen (Spoilers)

Netflix's The Sandman made some storyline changes as it was adapted from page to screen. Here's a look at some in S01E01 "Sleep of the Just."