The drama between MTV's Floribama Shore cast on Twitter finally boiled over into this week's episode of the reality series, and comrades, I am here to tell you all about it. Hola, amigos! It is I, your El Presidente, and when I am not torturing political dissidents or thwarting coup attempts, I spend my time in the best way possible: by watching trashy reality television! Here's what happened on this week's episode of Floribama Shore.

This week's episode of Floribama Shore was titled Arms Folded, Fingers Crossed. The show picked up from last week with Bethany visiting the roommates and unresolved tension between Candace and Gus heating up all week long on Twitter.

If you ever wondered if the Twitter drama is part of the work, comrades, just look at this week's episode. All week long, Gus and Candace argued on Twitter about the exact same topics that would occur on this week's show, even though it was filmed months ago and both have made up since then. That being said, following the Twitter drama does add to the experience of watching the show, and all of those angles that started on Twitter definitely paid off this week when Candace decided to air all her dirty laundry during a game of First Impressions.

Instead of revealing her first impression of one roommate, Candace decided to do all of them. Highlights included thinking Codi was gay and that Aimee was a racist, and though Candace came to believe the opposite of Aimee when it comes to Codi, she felt that Codi at first wanted to have sex with Aimee, but when that didn't happen, he wanted to "settle for the black girl."

This kicked off a massive argument, comrades, and to be honest, I know how Candace feels. Every time the American CIA comes to my country and tries to overthrow the government, they act like I should be happy they are showing me the attention, but I know they would really rather be fomenting a coup attempt in Haiti or overthrowing the Cuban government. You're not fooling anyone, American CIA!

Bethany explained Candace's feelings, such as how Black women feel like they're expected to be grateful that a white person wants them, rather than having a choice in the matter, as a means of explaining the trouble Candace has had with Codi over the years. All of the roommates were very understanding… except Gus.

Candace said that out of all the roommates, she felt that Gus ignored her and never bonded with her. Gus disagreed, and, to be fair, the show rolled several clips showing Gus making just such an effort. But the root of the drama, comrades, was that Gus invited his sister to visit the house later this season, but Gus's sister threatened to fight Candace last season.

But after the gang spent the day outside enjoying a homemade Slip and Slide, Candace and Gus finally managed to make up and squash their beef, with Candace pointing out that both of them are stubborn in the exact same way and that this doesn't mean they need to constantly butt heads.

The reconciliation left the cast to celebrate Gus's birthday and to cheer on the budding romance between Jeremiah and Bethany, as the two took a romantic kayak ride together. It looks like everything is copacetic on Floribama Shore comrades… until Gus's sister arrives in a future episode, of course.

Comrades, I am glad to see that Candace and Gus were able to squash their beef. Living in the same compound with a bitter frenemy isn't easy. There have been times when I have wondered if my own protege, Maduro, would betray me and attempt to seize power, which is why I keep him under constant surveillance. Maybe that's what Candace and Gus should do to make sure things don't heat up like this again.

This week's episode of Floribama Shore delivered on the drama that reality TV fans crave. Comrades, there is nothing like watching real-life trauma lead to lashing out and emotional pain and suffering all for my entertainment! This is the kind of stuff I want to see from this show, comrades. A very well-done episode indeed. Haw haw haw! Until next time, amigos: socialism or death! 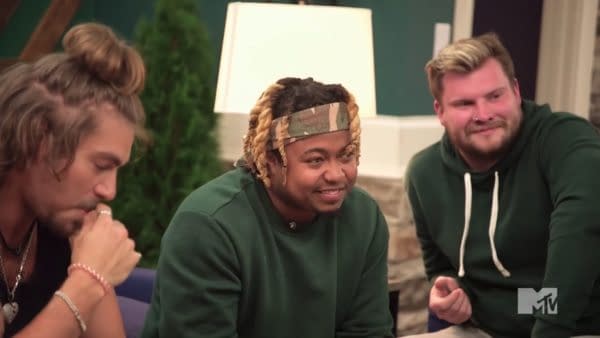 Review by El Presidente
8.5/10
The drama between MTV's Floribama Shore cast on Twitter finally boiled over into this week's episode of the reality series, and comrades, I am here to tell you all about it.