Reacher is at last upon us. The books by Lee Child have sold about 200 million copies around the world, so to say that the show is eagerly anticipated by fans is an understatement. All Amazon Studios had to do was not fuck it up. Did they? Let's say they got it mostly right. It's down to Alan Ritchson, who's the best Reacher you could hope for.

Reacher adapts The Killing Floor, the first novel in the series that set the template for the rest of the books. Jack Reacher (Ritchson), a drifter arrives in a small town just to hang out and is immediately arrested for a murder he didn't commit. Reacher quickly finds allies in local deputy Roscoe (Willa Fitzgerald) and detective Oscar Finley (Malcolm Goodwin) as they uncover a conspiracy that has corrupted the entire town that turns personal for Reacher as his investigation becomes a mission of revenge. The novel was an updated "stranger comes to a corrupt town" that established the Reacher series as modern combination of pulp noir and Western thrillers. Reacher is the quintessential pared-down drifter-vigilante who doles out frontier justice in what one critic calls "artisanal fascism", a hilariously apt description for the way he just goes about killing bad guys without angst, remorse, or fear of repercussions.

Alan Ritchson is the Right Reacher

Ritchson is the reason for watching the show. He's the Reacher from the books, playing it with a sly, wry, dry humour that always was always lurking in the character. He nails the physicality of Reacher, the unstoppable block of vigilante justice that hitchhikes around America. Ritchson plays the Reacher from later in the novels, more fully-formed than he was in The Killing Floor. Lee Child was still in the process of figuring out Reacher in that first book, but the character in the first series is the one recognizable from the books, the archetypal drifter who refuses to stay in one place. He's Captain America with antisocial tendencies.

The series adapts the plot of The Killing Floor surprisingly faithfully but also pulls in moments from the book series. The flashbacks to Reacher's early life are drawn from short stories that Child wrote to flesh out Reacher's family background. The script also gives Finlay more to do and turns him and Roscoe into Reacher's main team in their investigation.

Frances Neagley does not appear in the original book. She's introduced much later as a former MP in Reacher's investigative unit in the 110th that he formed while in the Army. The show introduces her in the 5th episode so that she can become a series regular in any further seasons, and possibly to set up Reacher's support system in the first season. The script makes Neagley a chatterbox speaking Exposition when she's introduced and waters down any sense of mystery she had. In the books, Neagley is described as the female version of Reacher – sometimes by Reacher himself – and is one of the few people he describes as "scary". She is the closest he has to a best friend, and she's even more taciturn and stoical than he is. The scripts bend over backward to make Neagley as soft and Network TV Likable as possible, which really isn't necessary. Then again, the show is full of corny Network TV compromises that mount as the season goes on.

The first half of the season is more fun because it stays true to Reacher. Then the TV tropes kick in and things get less fun. The big compromise comes in turning Reacher into an exposition machine. Like the Tom Cruise version, he's an inveterate mansplainer who has to explain the plot to the audience and how he figured out the clues like Sherlock. The only reason the scene where he explains the Blues to Finlay isn't a total cringe is that it's played as a joke, but it walks a very thin line. Even Neagley, who's as taciturn in the books as he is, has to speak clumsy Exposition during her introduction because the writers felt the need to spell out her past ties with Reacher when it could have been inferred or expressed with far fewer words. There must be a better way to write exposition without having characters tell each other shit they already know all the time.

But this being TV, the writers just couldn't resist – or perhaps avoid – TV action clichés: in the later episodes, Reacher and the supporting characters end up in completely contrived fights and struggles that they really should have been too smart or sensible to end up in. Reacher even gets beaten up by a bad guy half his size and 30 pounds lighter when the beginning of the show spent calories establishing that he was way too big and heavy to be taken down by anyone smaller or lighter, even if the guy had a crowbar. Hollywood screenwriter habits die hard, and the writers obviously couldn't keep having a hero who was invulnerable to threats, and any attempt to make Reacher physically endangered by an average-sized man was never going to look real. It seems the writers found it hard to have a hero who can't be in jeopardy, and it is very difficult to convincingly threaten Jack Reacher. They didn't succeed.

The climax of the story is the same as the book's but it gives Reacher a team instead of his one-man assault on the warehouse. Shootouts are usually the least interesting set pieces in a Reacher story and the writers fail to disprove that. Reacher shooting someone is never interesting. The interest is in how Reacher puts down his enemies in a fight using both strategy and brute strength. The climactic raid on the bad guys' factor in the finale is riddled with some of the worst network TV action clichés. There's a gratuitous and dumb fistfight between Roscoe and the corrupt Mayor, and another one between Findley and a bad guy who should be dead and had no sane reason to show up at the warehouse for the final fight other than to give Findlay a climatic fight. Honestly, are dumb network TV clichés the price we have to pay for a halfway decent adaptation of a book? These clichés seem to have been beaten into every TV writer in Hollywood, and they keep insisting on fixing things that aren't broken in the original books. This happens even more in The Witcher series and is worse there.

In the end, it's mostly a win, and it's Ritchson's win. The show is best when it lets him be Reacher. It's so over-the-top – just like the books – that it's best to watch it as a comedy of pulp vigilante thrillers. If the writers get out of the way of Reacher, subsequent seasons can only get better if they just stick to the pulpy glee of the books and away from TV tropes. 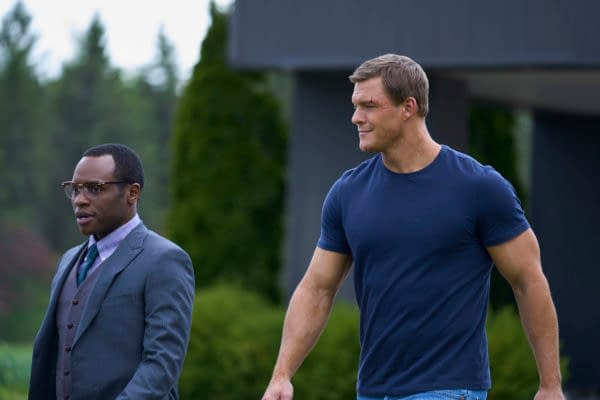 Review by Adi Tantimedh
7.5/10
In the end, Amazon's Prime Video adaptation of Lee Child's Reacher is mostly a win, and it’s Alan Ritchson’s win. The show is best when it lets him be Reacher. It’s so over-the-top – just like the books – that it’s best to watch it as a comedy of pulp vigilante thrillers. If the writers can get out of the way of Reacher a little more, and if they just stick to the pulpy glee of the books & away from TV tropes, subsequent seasons will only continue to improve.

Uniqlo has announced that it will launch the SPY x FAMILY UT collection on Thursday, July 7th, in the United States. The collection celebrates the hugely

The Rising of the Shield Hero Season 2 finale will stream on Crunchyroll on June 29, with the English dubbed version streaming on July 29.

Depending on your perspective, Steven Moffat promised/threatened viewers that he has more seasons of HBO's The Time Traveler's Wife in mind.

ABLAZE to Publish Fight Class and Witch of Mine Webtoons Series

ABLAZE, the eclectic publisher is expanding its webtoon and manhwa graphic novel line with the announcement of Fight Class 3, which mixes high school life