If there was one theme that's been prominent within the universe of The Orville, it's LGBTQ representation- particularly among the heavily conservative Moclans. To recap, the species is heavily patriarchal and traditionalist in nature. They procreate by laying eggs. Originally thought to be just a race of males, it was revealed that all children of their species are to be male regardless of initial status. The presence of females is often considered heretical within Moclan society and even barely tolerated from the outside. As it was the stance of the Planetary Union to remain out of the affairs of its own member nations, the crew of the Orville often found itself at odds within the Moclan homeworld, which also has an impact on the Orville's Moclan crewmember Lt Bortis (Peter Macon) and partner Clyden (Chad L. Coleman). Both are parents to Topa (Imani Pullum), the main focus of the story. Consider this your spoilers warning moving forward…

The story of "A Tale of Two Topas" begins when Topa decides he wants a career to become like his father Bortus as a Union officer. He adopts Cmdr Kelly Grayson (Adrianne Palicki) as a mentor to help his way to possibly becoming an officer. Unfortunately, there's uncertainty within Topa that's eating at his very core and he's not aware of why as he was originally female and a Mocclan ceremony reassigned his gender much to the protest and reluctance of Ed (Seth MacFarlane) and Bortus. Clyden, who's staunch in the Moclan ways, was also originally female at birth and carried the shame of it given the cultural norms compared to the much more progressive Union.

The same conventions are there as previous Mocclan-centric episodes except that it's Palicki driving the narrative more with her bond to Topa. We get similar contentious conversations with Kelly as we did Ed in those previous episodes. It's the kind "as a society" we need to keep having given current anti-LGBTQ resistance. There's absolutely no question that the series runs through the gamut of everything that needed to be said in such a delicate storyline even to the point of the darkest ends of depression and triggering moments. Pullum certainly deserves serious consideration for an Emmy in a guest capacity.

The other arc is almost an afterthought, but it involves an archaeological excavation scratching the surface of its wonders. In the realm of sci-fi, it's ironic that such a mystery would have little to nothing to do with the main story, but was effective as a secondary storyline. Written and directed by MacFarlane, the episode doesn't get a downgrade for hitting some familiar notes because those notes hit hard each and every time when it comes to tackling social norms. As far as narratives go, this provides a bold first step for Topa, a character we didn't really know. 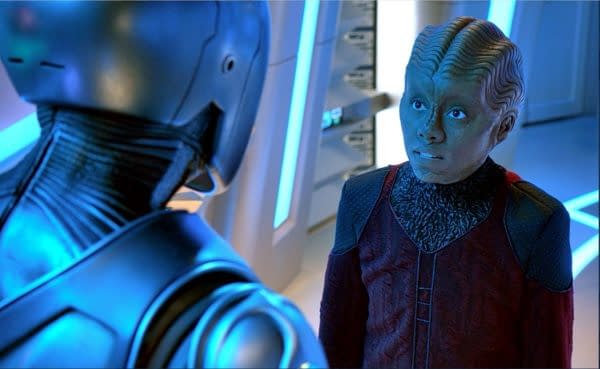 Review by Tom Chang
9.5/10
Seth MacFarlane does a tremendous job tackling the complexities of an LGBTQ storyline with several layers. Even when he goes back to those familiar notes, the tension surrounding all the angles he demonstrates is nuanced to the point of individuality, right down to the mindset of someone as rigid as Chad L. Coleman's Clyden. It's a testament to the entire cast, including Adrianne Palicki, Peter Macon, Mark Jackson, Penny Johnson Jerald, and (especially) guest star Imani Pullum, in a heart-wrenching performance.
Credits
Director
Seth MacFarlane