This week's episode of FX's What We Do in the Shadows S04E05 "Private School" was another fantastic piece to add to the ongoing repertoire of an amazing season so far. We get to see the many faces of our weird vampire family and many instances of roleplay among them. Definitely, a fun and biting episode that will leave you feeling guilty for laughing at their shenanigans.

First off: sometimes I find storylines where everyone is involved hard to accept, I mean, most times, there are several storylines going n at the same time- this one was one main antagonist for everyone: Baby Colin (Mark Proksch) who is now on his annoying phase not leaving anyone alone I remember I used to know a pair of siblings like that, they were nicknamed "The Tsunamis" because they would destroy anything on their wake. Anyway, Baby Colin has now become unbearable, and what is even weirder? Everyone agrees

So after the neighbor Sean (Anthony Atamanuik) finds baby Colin destroying his yard, they find a solution: send the boy to private school. Turns out that Sean knows someone in the school and gets them an interview with the principal. Things do not turn  out as expected; or rather, it seems nothing was expected since they had absolutely no plans whatsoever or a background story at all about Colin or their family. Turns out, they overdid it with the hypnosis, and the principal suffered a stroke that evening. I am not going to lie, Laszlo (Matt Berry) and Nadja (Natasia Demetriou) kept reminding me of It's Always Sunny in Philadelphia, they really feel like they are part of the gang. And bonus points go to that rather "impractical" guest star for his neck-breaking guest turn.

Between their changes in roleplaying and Nandor's (Kayvan Novak) need to change his features through the Djinn (Anoop Desai)— he had a different face on each single take. This has to be one of my favorite moments on What We Do in the Shadows. That, and we also discover Guillermo (Harvey Guillen) is living the life, yo! Apparently, he is taking money from the club to help his family… ahem, and possibly himself, ahem. Anyway, Nadja is pretty much doing the same, which seems like recipe for disaster. They have the money to fix the house, Nandor has the wishes, and yet no one does anything… and the house is still a piece of ish.

This really was a fun episode, and I can only imagine that it's only going to get funnier the more we watch it. It was funny with a very dark humor component to it. Which is a nice way of saying that I felt a bit guilty while laughing my ass off, a sign of some truly great writing. And next week? It looks like we have a "vampire wedding" (uh-oh) heading our way when FX's What We Do in the Shadows returns. 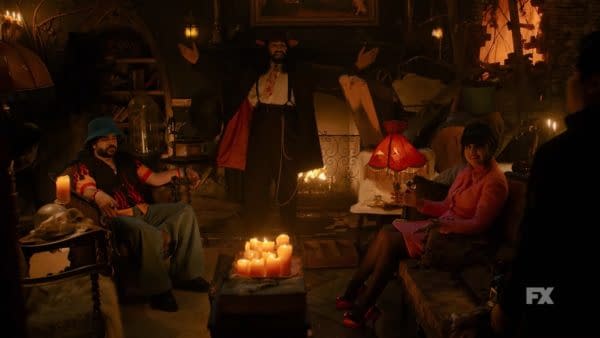 Review by Alejandra Bodden
8.5/10
This week's episode of FX's What We Do in the Shadows S04E05 "Private School" was another fantastic piece to add to the ongoing repertoire of an amazing season so far. We get to see the many faces of our weird vampire family and many instances of roleplay among them. Definitely, a fun and biting episode that will leave you feeling guilty for laughing at their shenanigans.

AMC's Anne Rice's Interview with the Vampire is an engrossing & enthralling take on Anne Rice's novels and one of the best series this year.

The second part of Spy X Family is now streaming on Crunchyroll, with S01E13 "Operation Apple" bringing the Forgers back in fine fashion.

My Hero Academia S06E01 "A Quiet Beginning" Is Anything But: Review

My Hero Academia S06E01 "A Quiet Beginning" was a fantastic start, with building suspense & action and some interesting twists along the way.

With the second season of the popular anime set to hit screens in 2023, Crunchyroll shared new key art for the return of Jujutsu Kaisen.

What We Do in the Shadows S04E10 Review: The More Things Don't Change

In the fourth season finale of FX's What We Do in the Shadows, Colin grows up, Nadja gives up, and Guillermo makes a game-changing decision.

In the following preview for Adult Swim's Rick and Morty Season 6 Ep. 7... in a world where everyone is a Jerry, is anyone REALLY a Jerry?

Justice U: David Ramsey Offers Update; Are We Getting Arrowverse 2.0?

Actor/director David Ramsey updated still-in-development Justice U & we speculate if the series is an essential part of an "Arrowverse 2.0."