Last month, we learned from the solicitations for comics shipping in May that newly minted progressive political star, Congresswoman Alexandria Ocasio-Cortez, will star in her own comic book from publisher Devil's Due. The comic is being made by a creative team including Josh Blaylock, Dean Haspiel, Pat Shand, Shawn DePasquale, Hoyt Silva, Jill Thompson, and Tim Seeley, and follows in the tradition of Barrack the Barbarian, a similar-in-theme comic book series published by Devil's Due in 2009 starring then-President Barrack Obama which was written by the legendary Larry Hama.

Ocasio-Cortez even commented on the comic (while being stalked in the hallways of power by TMZ), calling it "an honor that people would put so much of their own time and talent into that all on their own," a way of pointing out that she isn't personally involved with the project in any way. However, she did say of the potential effect of starring as a Wonder Woman type superhero in her own comic book: "If I can be that for a little girl somewhere where she can see herself being a superhero, I think that's the thing that's important for all of us. We all have a superhero inside of us.

By basing a comic book on the polarizing political celebrity, whose policy ideas, social media savvy, and sheer boldness has made her as much a boogeyman for conservative pundits and thorn in the side of centrist Democrats as it has made her virally popular with progressives, Devil's Due could have a big hit on their hands. Controversy, as the great Eric Bischoff once told us, creates cash. The Ocasio-Cortez comic has already stirred up more media attention, with multiple articles from every major comic book website in just a few weeks, than pretty much anything not solicited by a "major publisher" in recent memory.

It's also the talk of social media, but not just due to its subject matter. Several comics professionals have used the announcement of the comic as a launching pad to bring up longstanding financial issues and reports of missed or late payments and moneys owed to creators by the publisher, with Mike Norton tweeting:

I feel like if you're gonna make a comic about a public figure who champions a living wage, you shouldn't owe a bunch of money to freelancers.

That post garnered hundreds of likes and many more interactions, including a few from creators who have worked with Devil's Due and its owner, Josh Blaylock, before. Such as Nate Lovett, who says he was eventually paid money he was owed, but not until his "then pregnant wife called [Blaylock] and tore his ass a new one."

dude won't look me in the eye when he sees me at shows. probably due to the fact that when he owed me money, my then pregnant wife called him and tore his ass a new one. i guess i ended up being a lucky one who did get paid.

Though Lovett calls himself "a lucky one who got paid," that's true of everyone, as Thomas Mauer tweets:

A bunch of money is putting it lightly. They're ghosting me for months now.

And one comic creator who says his book was recently picked up by Devil's Due, Jake Smith, expressed concern after learning of the past complaints.

For real? My book just got picked up by that company. I hope I get paid haha

With the conversation on Twitter heating up, comic creator Mike Costa decided to take the message to Ocasio-Cortez directly, tweeting:

Hey @AOC I'm almost certain you're not aware of this, but @joshblaylock and @DevilsDue are fundamentally dishonest and exploitative, owing many freelance artists tens of thousands of dollars he has no intention to pay. Some have been waiting for payment for over a decade. 1/5

Of course this is a shell game played by unscrupulous businessmen everywhere. And of course, people never see their money, yet @joshblaylock and @DevilsDue continue to publish new projects, the money they generate somehow never finding its way to the people who create them. 3/5

If I were you, I'd want to know. Thank you and keep fighting the good fight (hopefully for comic book creators too.) 5/5

Devil's Due's financial issues last came to a head in 2010, with a Bleeding Cool report by Rich Johnston at the time noting:

Bleeding Cool has run a number of articles about publisher Devil's Due's woes. How the publisher became victim to increasing number of bookstore returns. How it began to owe Diamond Book Distributors more than it was receiving and how Diamond Comics Distributors began to recover that debt throught comics revenue. And how Devil's Due found itself unable to pay bills as a result, running on the good will of its contributors. Until they began to sue.

Today, what Diamond were fearing has happened. Devil's Due Publishing has pulled its distribution of comics and graphic novels from Diamond Comic and Diamond Book Distributors. Naturally Devil's Due have other distribution models planned, and it's not as if there is no precendent – when there were legal rumblings over the Reanimator Hack/Slash crossover, the company distributed them outside of Diamond.

But the company now has full time distribution plans outside of Diamond, including challenger Haven distributors. And Diamond now have a low six figure debt with no revenue coming in to service it. Though on Devil's Due side, it seems that Diamond have lost a fifth of Devil's Due stock for last year. There are a lot of people who are not going to be happy with any of this.

And in 2012, Devil's Due returned to Diamond, with a promise to pay back creators money's owed. Judging by the conversation on social media, it would seem that task has not yet been completed.

Likely spurred on by the conversation surrounding Devil's Due, comics' "secret twitter" has apparently been abuzz with talk of poor behavior by publishers toward freelancers, with comic creator Steve Lieber tweeting:

Not to mention the all time fave of late payments. And no one can say anything publicly because of the risk of being labeled a "difficult" freelancer. I feel awful for them.
(Please don't DM asking who the guilty parties are- they aren't my stories to share.)

And Jen Bartel offering some advice to freelancers:

There are a ton of reasons why many creators can not or do not feel safe publicly talking about their experiences within the industry, but if you email or DM them, chances are they will be honest with you and do their best to warn and protect you. Reach out to them.

Bleeding Cool reached out to Josh Blaylock for comment on the story, and Blaylock sent us the following statement:

Before I make a statement, I think this is a good opportunity to address some personal things from many years ago, apologizing not only to the people this whole thing is about, but also to those who worked for me within DDP over a decade ago, during some very difficult times.

After several hit titles in the early 2000s, we grew exponentially and I became overwhelmed, turning to all the wrong kinds of advice. Help from "corporate experts" and consultants. I brought people into the business that shouldn't have been there. It led to severe damage, and I'm sure turned what was a great studio, full of kids having fun while trying to figure out what the hell we were all doing, into an often unpleasant place to work.

When the chips were down, what I really should have done for support was turn to the core group of creative, smart people in our crew who all came up together with me from those 1990s artist alley tables to build what was then one of the largest indie companies in comics, until it cratered years later. It still might not have worked out, but at least it would have maintained many important friendships that were lost along the way.

As for addressing current comments, fixing the problems of the old company has always been one of the primary purposes of the current business, and a shadow hanging over it. To say that progress hasn't happened as much as possible, or that no one has been paid, or that it's just dismissed outright is simply false. Anyone who knows how small comics really is knows that's suicidal.

As for how long it takes to finally put it all behind us, turning things around is directly tied to how successful books are, and since reemerging from everything six years ago, it's not over yet. Coming back was only possible at first thanks to a loyal cult following of fan support, and was a painfully slow process. Despite growing we're still a very small operation that has yet to have a massive hit.

As we could finally be on the cusp of our first major hit since the relaunch, of course this is on my mind on a constant basis. It is something that can not only help this goal move forward, but may resolve it completely. Right now it's too soon to say.

If you're a comic book creator experiencing issues with a publisher but don't want to speak publicly about it, you can always feel free to contact Bleeding Cool (see my contact info below, or Rich Johnston's on any of his articles). Bleeding Cool will respect the confidentiality of anyone wishing to remain to anonymous. 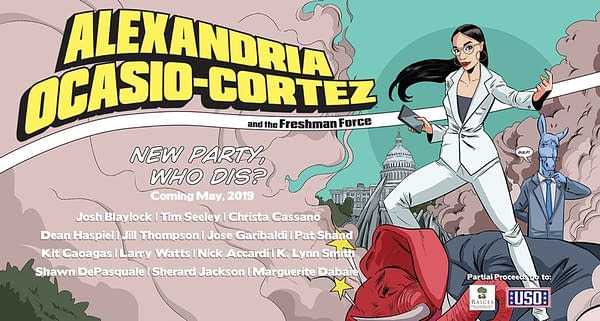