Home » Comics » Has Marvel Featured a Prominent #Trans Character Under The Radar for a Year-And-A-Half?

Bleeding Cool looked at the recent Immortal Hulk #31 by Al Ewing and Joe Bennett and the backstory of one Dr Charlene McGowan, a scientist working for supervillains who is now working for the Hulk.

She formerly worked for CalTech but was fired for drug use. She later began working for the Kingpin's Mutant Growth Hormone narcotic lab, leading to her arrest. That was when she was approached by General Reginald Fortean to join the U.S. Hulk Operations, a secretive government organization set up to capture or kill the Hulk and other gamma mutates, in exchange for clemency. She accepted and worked with inmates, treating them with more care and concern than her colleagues.

During the battle between the U.S. Hulk Operations against the combined forces of Gamma Flight and the Hulk and his allies, McGowan was confronted by Rick Jones over her actions. McGowan said that she felt guilty over what she had done and was actually trying to relieve subjects of their suffering. Spared by Jones, McGowan took control of command of the operation and began to work with the Immortal Hulk when he took over.

In Immortal Hulk #31, we looked at her work creating the narcotic Mutant Growth Hormone, from a captive young mutant, and her attempts to mollify the harm done. And then moving the Kingpin's departmental focus into black market hormone replacement therapy. Bleeding Cool looked at what might have inspired that, a shortage of such treatment in the UK for people coping with the menopause, as a result of Brexit, the collapse of the pound and the government's reclassification of the treatment.

What I didn't figure in was the role that hormone replacement treatments also play in gender transition, and why this might be a very personal matter for Dr McGowan, with shortages affect that community as well – whether in UK, or in the US due to healthcare insurance and excessive cost. And where there has been a thriving – and dangerous – black market for some time.

Colours that The Immortal Hulk nailed to the mast in previous issues. 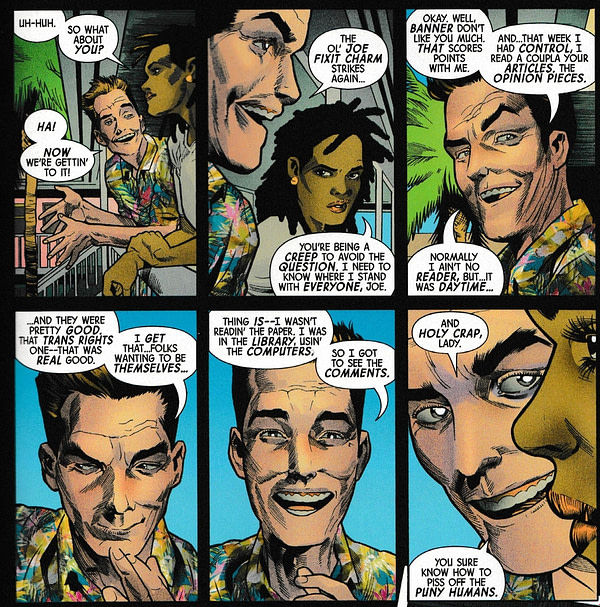 And in conversation, Ewing appears to have confirmed that interpretation.

The first appearance of Dr McGowan is Immortal Hulk #6 in September 2018.

Zatanna Zatara was created by Gardner Fox and Murphy Anderson, and first appeared in Hawkman #4 in 1964 from DC Comics. Both a stage magician and an

Unhappy Camper is a new middle-grade graphic novel by Lily LaMotte and Ann Xu, to be published in the summer of 2022. Picked up by Clarissa Wong at

Batman And The Joker Top The Bleeding Cool Bestseller List

June's The United States of Captain America #1 from Marvel Comics will introduce a number of new characters, including Aaron Fischer is described as "the

Kaare Andrews is one of my favourite comic book creators, with a shifting, malleable style that jumps from genre to genre, with a mastery of light and

Venom Cameos In Amazing Spidey #299 At Auction Today At Heritage

What really is the first appearance of Venom why is it NOT #299 people? It is on auction at Heritage Auctions today.

The Strange Story Behind 1950's Strange Adventures #1 from DC Comics

Strange Adventures #1 represents a key turning point in the history of DC Comics and is a fascinating artifact of science fiction history.

Why are Impulse and Gold Beetle jumping off a building in this preview of The Flash #769? Guess you'll just have to click to find out.

With her book in double digits in this preview of Spider-Woman #11, Jessica Drew takes matters into her own hands and reboots herself before Marvel gets the chance!

Batgirl & Nightwing Talk @#$% Behind Batman's Back in Nightwing #79

You won't believe what Dick and Barbara have to say about Batman when he isn't listening in this preview of Nightwing #79 from DC Comics!

Welcome to Another Bold New Era in This Champions #6 Preview

This preview of Champions #6 gives readers a look at the bold new direction from a brand new creative team... for the second time in 6 months.