This is the Top Ten Bleeding Cool Bestseller List, as compiled by a number of comic stores from their sales on Wednesday and Thursday. It measures what are known as the "Wednesday Warriors", those who can't wait till the weekend to get this week's comics. And Powers of X goes out with a bang,… 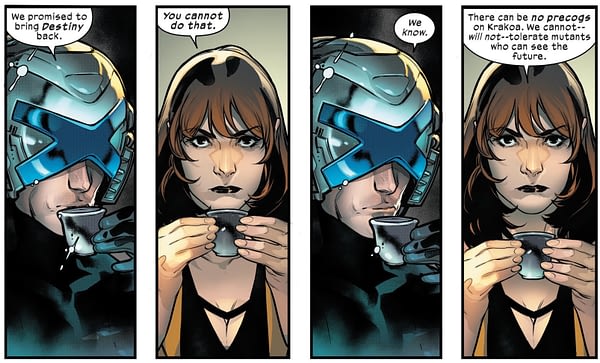 The final issue in Hickman's big X-Men makeover follows it's predecessors in dominating our sales this week. Now the big question is can any of the new X-ongoing books spinning out of it keep up the heat?

Moving on down the list: the JOKER YEAR OF THE VILLAIN one-shot did quite well, likely thanks to a combination of the character's general popularity and the novelty of having John Carpenter on writing duties.

AMAZING SPIDER-MAN and DETECTIVE COMICS both sold quite well as they often do. The new Warren Ellis/Bryan Hitch BATMAN'S GRAVE also performed well, though perhaps not quite as well as we'd hoped.

We have a few more usual suspects with SUPERMAN, CATWOMAN, and MILES MORALES SPIDER-MAN. Holding on to the bottom of the list, we have Todd McFarlane claiming the title of Longest Running Creator-Owned Comic Series with SPAWN #301.

Buffy is close on Spawn's heels, as is Craig Thompson's Ginseng Roots.

—-
Five Marvels, four DC's, and one Image in this week's top ten–and all four DC titles are Bat-family books. Event Leviathan has quickly become uneventful, Superman has fallen way out of our top ten, and even Bat-books like Detective and Batman & The Outsiders are losing steam. The X Juggernaut continues with Powers of X #6, which was far and away the best-selling book for us this week.

Weather is getting colder and so was the sales this week. Powers of X easily took the top spot. Doom bombed right out of the gate sadly.