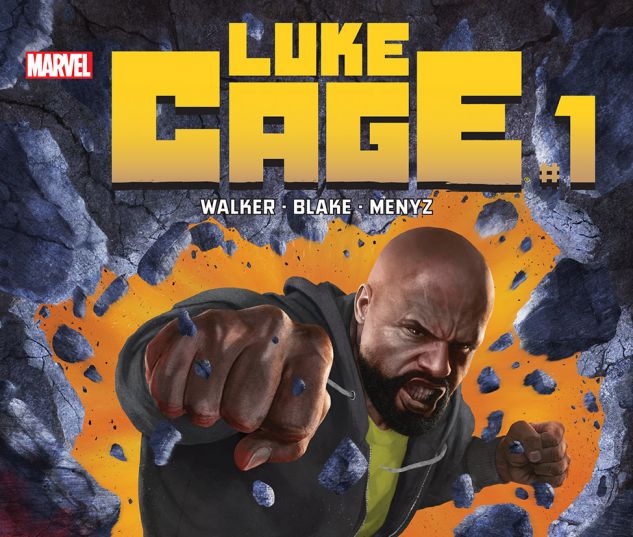 It feels like a long two months since the last issue of Power Man and Iron Fist came out, but the man himself, Luke Cage, is back in business, suckers.

I was truly sad to see PM&IF go; that is my favorite dynamic duo in comics, and they have a heartwarming bromance to outdo even the likes of Green Lantern and The Flash or Thor and Hercules. Frankly, their friendship is only rivaled by Captain Marvel and Spider Woman in terms of making me happy.

I was still very excited to see a solo Luke Cage comic come back by the same brilliant scribe who wrote Power Man & Iron Fist as well as other great books such as Cyborg and Occupy Avengers, Mr. David Walker.

The book starts with Luke arriving in a small club presumably somewhere in New York. He goes into the basement and beats some ass, arriving at a hostage situation which he handles with cleverness and a flick in the head.

He later receives a call letting him know that Dr. Noah Burstein, the man who gave him his super strength and unbreakable skin, has died in New Orleans. He goes down south for the funeral and is approached by a woman called Dr. Mornay. She worked with Dr. Burstein in his final days, and we learn that his death was the result of an apparent suicide.

Luke leaves the funeral with Dr. Mornay, and we learn through his thought captions that he is feeling a little lost because of Noah's death. We also see a figure watching the two leave.

Luke accompanies Mornay to a plantation-like estate outside of the Big Easy belonging to a Morgan family. There, we learn that the son of the owner of the estate was saved by Burstein despite him having a condition which all other doctors said was incurable. This was due, apparently, to the experiments which Burstein performed on Luke Cage.

After Luke and Mornay leave the Morgans, Mornay tells Luke that she believes that Noah Burstein's death was not due to a suicide as the evidence suggests. She also tells Luke of violent outbursts that have been experienced by Morgan's son as well as unnamed others who have been put through what she calls "the Burstein Process."

The two are then run off the road by a small crew of men in suits and gas masks. One fights Cage and proves to be super strong like the former-Power Man. He then pulls out a sort of chain sword which cuts into Cage's nigh-unbreakable skin.

The rogues escape with Mornay, leaving Luke to bleed out in the road. However, the Power Man is saved by the mysterious figure from earlier in the comic who is shown to be Mitchell Tanner, the first person Burstein performed experiments on and a regular murderous foe of Luke Cage. The comic ends on this reveal.

This was a strong first step for what promises to be an interesting series. Walker is an expert in writing interesting and fun comic books, and Luke Cage looks to be no different.

From the opening with Luke beating down the guys in the bar to the ending with Luke talking smack to the guys who ran him off the road, this feels like a true Luke Cage comic book. There's plenty of action and intrigue, and it holds your attention throughout.

There are some continuity questions for me, though. Primarily, though I have not read nearly as much classic Luke Cage tales as I would like, I always got the impression he had a tumultuous relationship with Noah Burstein as opposed to this father-son relationship which is shown in this comic. I have nothing wrong with Luke having some negative feelings about Noah dying, but it seemed like he had far more positive emotions directed towards Burstein than I imagined, particularly in reading that Cage: Second Chances collection which was released in trade a couple of years back.

The art is gorgeous. It's a sterile look but in a good way. There are plenty of details, but there are also a lot of clean spaces on the figures and characters. It's an appealing appearance, and the bright colors help add to that appeal too.

There is the question as to whether or not this sterile appearance fits a comic about Luke Cage, a street hero with a lot of personality who tends to get down into the dirt and grime of the underworld to clean it up. I can't say that the art perfectly fits Luke Cage, and I do find myself missing the very stylized work of Sanford Greene from Power Man and Iron Fist, but this art still looks aesthetically pleasing and will probably grow on me and anyone else who reads this book.

This is going to come off as a weird observation, but the lettering is actually a bit off in this book. The dialogue seems shrunken down and is far too small for the bubbles. It strains the eyes a bit more than I'd like, and I had to really focus on the words to read what characters were saying. The thought captions do not have this problem to the same degree.

Weird lettering complaints and continuity questions aside, I loved this book. It was a fun read, and I can't wait to see what adventures lie ahead of Luke Cage in this series. Pick this up.

Josh is a longtime super hero comic fan and an aspiring comic book and fiction writer himself. He also trades in videogames, Star Wars, and Magic: The Gathering, and he is also a budding film buff. He's always been a huge nerd, and he hopes to contribute something of worth to the wider geek culture conversation. He is also happy to announce that he is the new Reviews Editor for Bleeding Cool. Follow on Twitter @joshdavisonbolt.
Comments will load 8 seconds after page. Click here to load them now.

Iceman and Bishop team up to investigate a new attempted mutant massacre of the Morlocks in the tunnels under New York. Is it a good read?

We join the House of Whispers in the midst of a fandango in honor of Mistress Erzulie joined by Uncle Monday and a party of dreamers. Is it a good read?

Infinity Wars roars onward as Loki tries to talk Gamora into helping him, and Gamora creates the Infinity Warps. Is it a good read?

Weapon X must square off against Deadpool in order to stop Mentallo and spring Frail from the cult. Can they stop the Merc with a Mouth? Is it a good read?

Nightwing #48 Review: The Motor Cycle Race of the Cosmos

To discover the location of the Dark Web, Nightwing partakes in an intergalactic motorcycle race to gain access to a fount of knowledge. Is it a good read?

Deathstroke #35 Review: Doubling Back on Some of the Boldness

The battle between Deathstroke and Batman has ended, as both men are too injured to continue the fight and must escape the Batcave. Is it a good read?

The Ghostkeeper is Johanna Taylor's debut graphic novel, which tackles issues of mental health, toxic positivity, and grief, while following the exploits

The Original Wonder Woman in Pants Controversy, Up for Auction

The early 1970s era of Wonder Woman was both acclaimed and controversial at the time, and is historically fascinating today.