Disclaimer: COVID-19 numbers are currently spiking all over the world, and the danger from last year is very much still present despite the vaccine. When we are reviewing The Suicide Squad or any movie that will be released in theaters, a positive review is not an endorsement or encouragement to see a movie in the theaters. That is a risk that you must make for yourself and those around you. Please take into account whether or not you are personally vaccinated or if you are around someone who is high risk and any other health concerns for you or your family. If you are going to see a movie in theaters, do your best to social distance and wear a mask. The movie theater popcorn is not worth it. Stay safe, and please get your shots as soon as possible.

The Suicide Squad is a bloody and gory good time, which is to be expected, but thanks to some standout performances from the cast, it also has a lot of heart that makes you care about these people even while we hear about the terrible things they did.

Director: James Gunn
Summary: Supervillains Harley Quinn, Bloodsport, Peacemaker, and a collection of nutty cons at Belle Reve prison join the super-secret, super-shady Task Force X as they are dropped off at the remote enemy-infused island of Corto Maltese.

The road for the DC movies has been a bit of a rough one. They started out by giving the keys to the kingdom to one person, Zack Snyder, and let him make the movies he wanted. That was the right thing to do, but it backfired when the public and the critics ended up not liking his movie. That made Warner Bros. start to micromanage their movies which is how you got movies like Suicide Squad and Justice League. You should let filmmakers make the movies they want, but you also need to make sure that they have someone who will tell them 'no' occasionally, or you get the bloated four-hour mess that was Zack Snyder's Justice League. It seems that DC might have finally found the happy medium. Aquaman, while not perfect, felt like a genuine piece from James Wan. For all of its faults, it was quite obvious that DC let Patty Jenkins make the Wonder Woman sequel she wanted, and Shazam! is one of the best DC movies so far because they let a filmmaker take a chance on it. They stepped aside, and let James Gunn make the movie he wanted with The Suicide Squad, confident that he had a post-production crew standing behind him that would help keep him in check, and that was the right decision all around.

The Suicide Squad is exactly the type of movie one would expect from someone like Gunn. He has always been drawn to the misfits, the weirdos, the people living on the outskirts of society, the jokes; that's why he was the perfect man to bring Guardians of the Galaxy to the big screen and why he's the right man for The Suicide Squad. He makes you care about these people even while they are standing there and being terrible. The movie's most recognizable and mainstream character is Harley Quinn, and we get to see her used in such a great way. The characters are the reason we stay, and much like most movies with a large cast, there are always a few standouts.

In movies like this, there are always going to be the character that is cited as the "heart" of the movie. That title absolutely goes to Ratcatcher 2, played wonderfully by Daniela Melchior. Arguably, Ratcatcher 2 is the character that is given the most history as we actually learn quite a bit about her life and what kind of person she was before she got thrown into jail. Unlike all of the other characters, we actually feel bad for her, and she sees the good in even after King Shark nearly eats her. "He has kind eyes," she says to the shark-man that nearly bit her head off in her sleep. In a movie like this, where anyone can die at any given time, you are really rooting for her to make it through. She seems like one of the rare members of the Suicide Squad who could actually turn it around and do something good in the world. Polka Dot Man is not a character that you think could make it out of this better, and he is, without a doubt, not a good person. However, David Dastmalchian plays him so wonderfully that even though he is, without a doubt, one wrong move away from being Norman Bates, he's also a tragic figure. This was a character that wasn't born crazy but made crazy by the world around him. He's funny, he's trying, and once again, you want him to make it out of all of this alive even though he probably doesn't want to.

These two characters being so strong and another fantastic Margot Robbie Harley Quinn performance makes it all the more baffling that John Cena's Peacemaker is the one that is getting the spinoff television show. Perhaps if we didn't know that was coming, it would have changed things, but the knowledge that there are so many other interesting characters in this movie and this is the one getting the greenlight is just strange. Peacemaker is the least interesting character of the main cast, without a doubt. He's one-dimensional, he's rather dull, and the movie even goes out of its way to point out that with Bloodsport on the team, his skills aren't even that unique. Gunn is a fantastic writer; he made us care about Polka Dot Man; come on, so we'll have to see how it turns out in the end. But after Ratcatcher 2, Polka Dot Man, and Harley are so fun to watch; why this one? It's almost distracting for someone who knows what is on the horizon, and you cannot help but feel like the wrong character got the spinoff, all things considered.

The decision to make the movie not quite linear is the right way to go. We don't jump around a lot, but we do flashback a few days and sometimes minutes to see how we got here and where we're going. It keeps the momentum up, and there aren't any moments that feel like they drag on too long. The pacing is good enough; the slower moments, such as Ratcatcher 2's history, don't feel out of place but earned. The blood and gore are there, and The Suicide Squad does not hold back when it comes to killing its cast in creative, bloody, and very funny ways. However, it's the same humor that is employed by movies like Deadpool, where it is so over the top that while it might be King Shark ripping a man in half, it still doesn't feel tasteless. It's just funny and entertaining throughout the entire runtime.

However, it's not a perfect movie. It's hard to make you care about characters like this, and some do come across better than others, with Peacemaker being the weakest link of the bunch. Alice Braga and her plotline about an uprising in a small country barely gets two minutes of runtime, and most of that is for a joke at the expense of the Suicide Squad. Harley's side story is also a little strange to watch. While she makes it extremely entertaining, and the payoff is worth it, it does feel like padding for the sake of giving Harley something to do in the movie or justify having her be there in the first place. Joel Kinnaman is doing his absolute best to make Rick Flag an interesting character, but his arc feels like it is trying so hard to get somewhere and just doesn't quite stick the landing.

The Suicide Squad very much has the potential to become another smash hit the same way that Deadpool took the public by storm. It might be bloody and nasty and doesn't hold back, but much the same way, the center is about good characters played by fantastic actors that you really care about. In this case, you are really rooting for them to survive because there is a high body count with this one. They might be assassins and giants sharks, but Gunn's movies have always been about finding the human being within strange characters, and he has done it again. Finally, another DC movie joins the ranks of The Best DC Movies with Shazam! [don't @ me] and it's good to see. The Peacemaker show is all the indication that we need that DC and Warner Bros. are happy with how this turned out, and, much like when they hired Gunn for this movie initially, they should give him the funding to make whatever he wants again. It's clear that he can be trusted with that kind of power. 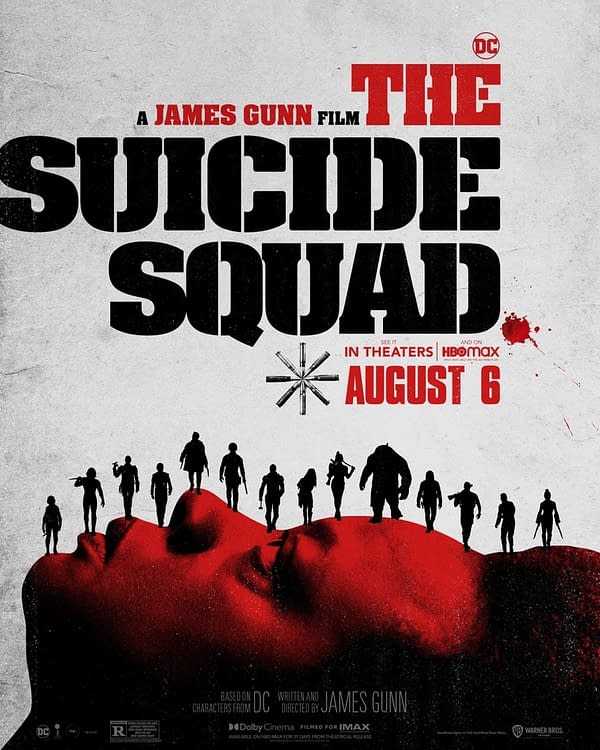 Review by Kaitlyn Booth
9.5/10
The Suicide Squad is a bloody and gory good time, which is to be expected, but thanks to some standout performances from the cast, it also has a lot of heart that makes you care about these people even while we hear about the terrible things they did.
Credits
Director:
James Gunn

Another release of The Ring is coming to Blu-ray in October, only this time it is housed in a collectible Steelbook.

Kevin Costner is gearing up to step behind the camera for passion project Horizon and three have joined the cast.

Emily The Criminal is elevated to another level by a standout performance by Aubrey Plaza. It is now playing in theaters.

On this episode of Castle Talk, Jason chats with William Brent Bell (The Boy, Brahms: The Boy II, The Devil Inside, Stay Alive), director of Orphan: First

Bodies Bodies Bodies is the summer's funniest film, and also a pretty wild thriller with and ending we should have all seen coming.