Top Gun: Maverick arrives in theaters this weekend as the perfect kick-off to the summer box office season. Miles better than the original 80s film, the script will not win many awards and the story is flimsy at best, but that is not why we are here. We are here to see action, and this is some of the best you will see on screen all year. See it on the biggest screen possible.

For years they teased a Top Gun sequel, and after director changes, filming issues, and pandemic delays, that this film is even coherent is a miracle. It has no business being good at all, and it reaches heights of entertainment that most studios would die for. Director Joseph Kosinski continues to impress with a visual style that not many filmmakers can pull off these days convincingly, as he pushes IMAX to its limit. Seriously, this film is begging you to see it on the biggest screen imaginable, and it is an experience that is well worth it.

Tom Cruise returns as Pete "Maverick" Mitchell, brought back to Top Gun to train a squad of graduates to carry out a dangerous mission, after years of being bailed out for bad behavior from Tom "Iceman" Kazansky (Val Kilmer, in a really touching supporting role). Among the men and women vying to go on the mission is Bradley "Rooster" Bradshaw, adult son of Maverick's deceased wingman Goose. Also around is a former flame of Maverick's, Penny, played by Jennifer Connelly.

None of the first 45 minutes of the film make a lick of sense, and if this is how the military actually runs…man. The script is all about getting us into the planes and up in the air, nothing else really matters, and the film doesn't do a very good job creating memorable characters in that first half for us to care about past Maverick, Rooster, and Penny. Other than that, all of the other characters are pretty one-note. That is until the second half. Then, we get a bit more personality from cocky pilot Hangman (Glen Powell), Phoenix (Monica Barbero), and Bob (Lewis Pullman).

The second half is when we go on the mission, and this is going to be where the film takes off (sorry, not sorry). It is a wonder that a film about fighter planes that feels dated to the 80s is so successful in 2022. The dog fights are exceptionally filmed, the stakes feel high, and there is some real drama when these pilots are in the air. Is it predictable? Of course it is, but who cares. You are having so much fun in the second half of this film that it makes you forget how boring the first 45 minutes are. By the end you will be fist-pumping along with everyone else, wondering if there could be a Top Gun 3, which is not something anyone would have thought walking into the theater I am sure. 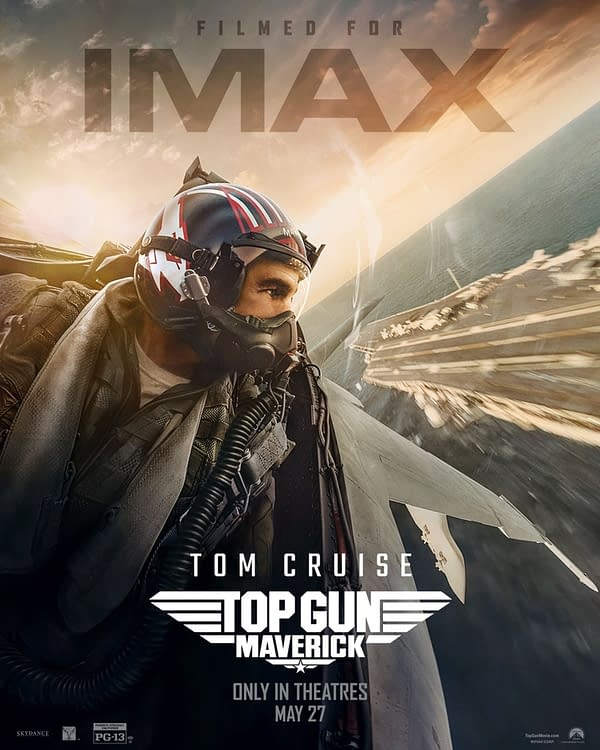 Review by Jeremy Konrad
8/10
Top Gun: Maverick is a great kick off to the summer movie season, and full of some of the best action we will see on screen all year.

Spirit and his trusty bird Freedom join the GI Joe Classified line, and it is a spectacular pair to add to your collection.

Today's GI Joe Week entry is a look at the new and in stores soon Classifed Storm Shadow figure, one of the best in the line.

Hocus Pocus 2 Teaser: The Sanderson Sisters Are Back, Witches!