If there's one thing I appreciate the most about the horror genre, it's that it offers writers & directors so many different creative avenues to travel down when it comes to common themes and tropes. Which is a nice way of saying that the horror genre, in particular, affords artists the opportunity to let their freak flags fly to get their messages across to the masses. So while I'm always looking for the next project that shakes things up and gets people looking at horror in a whole new (and respectful) light, I also appreciate those who can take a theme or concept we've grown to know and love (and occasionally groan about) and add their own spin, twisting things just enough to spark our interest. That's how I was left feeling about the third episode of FX on Hulu's American Horror Stories, the Eduardo Sanchez-directed and Manny Coto-written "Drive In"- a storyline with a familiarity that lured me in, with quality performances and some intriguing "Devil's Advocate" arguments raised locking me in for a frightful experience. So here's where I throw on the "MAJOR SPOILERS AHEAD!" sign and throw down a spoiler buffer image as we do a deep dive into "Drive In"- see you on the other side!

So following up on the point before about new twists on common themes & takes, let's start with the overall concept of the cursed artwork (TV shows, film, books, etc.) that the episode tackles. Works such as In the Mouth of Madness and the "V/H/S/" film franchise have covered this ground before, but Sanchez and Coto have anchored their narrative in a 2021 we're all too familiar with, where post-pandemic, "Content is Queen" now more than ever. Look no further than that pre-final credits moment when Larry Bitterman's (John Carroll Lynch) Rabbit Rabbit makes its Netflix debut (nice touch, Ryan Murphy) before all Hell breaks loose. If there was ever a time when we could easily see that happen, it would be now. Because buzz is buzz- and no one's confirming all those "murder rumors" anyway, right?

Then we have our cast, with Chad (Rhenzy Feliz) and Kelley (Madison Bailey) as our "terrified teens", and they definitely were. But Feliz and Bailey presented viewers with flawed but honorable protagonists who weren't victims, but survivors. We could relate to them and feel both for and with them, especially as they watch their friends go homicidally insane all around them. I'm curious to know the extent they were infected by what they saw of Bitterman's film and hope this isn't the last we see of them in the AHS universe. And I'd be remiss to not add Dee (Ben J. Pierce), Milo (Leonardo Cecchi), and Quinn (Kyle Red Silverstein) into the conversation- with Pierce, Cecchi, and Silverstein doing more to offer viewers layers to their characters in the brief time we spent with them than some series are able to pull off over the course of eight episodes. And as for Lynch's Bitterman, well we need to look no further than his last name. Combining a raging, narcissistic artistic ID with "white privilege rage" taken to the nth degree, and you have Lynch's powerful portrayal. This was a different "big bad" for Lynch, one lacking in the redeeming values or possibly relatable backstories that some of his past characters have had. Bitterman's "radioactive spider" was losing the Academy Award for The Exorcist– a masterstroke of detail that was also a respectful wink to horror's history.

As for the random thoughts that I was left with? Yeah, there were a few. Naomi Grossman and Adrienne Barbeau need to co-lead an episode of American Horror Stories. The storyline doesn't matter, but making this happen does. It was also interesting that for a franchise that's constantly stretching the boundaries of what television can portray, I thought it was interesting that the episode also made the argument that a little Tipper Gore (Amy Grabow) may not be so bad sometimes- especially when facing off with a "bitter man" (you're welcome for that one). And the thing with the eyes going black? It feels like that's becoming a constant in the AHS universe- does that help tie it all together or are we reading too much into it? Three episodes in, FX on Hulu's American Horror Stories has proven itself more than worthy of the journey to get those answers. 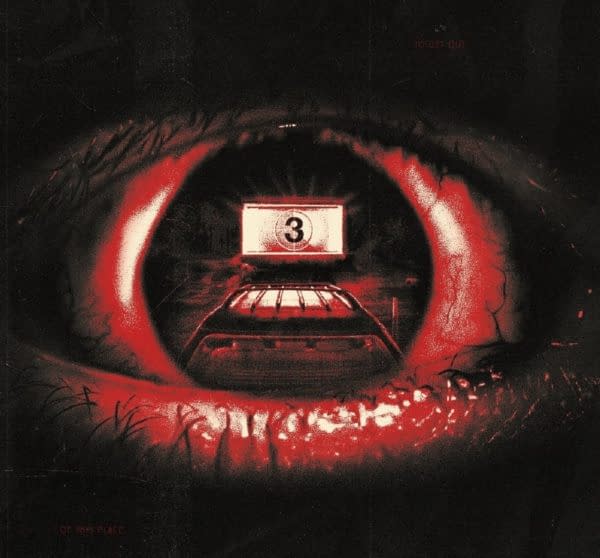 Review by Ray Flook
8/10
FX on Hulu's American Horror Stories went three-for-three with the Eduardo Sanchez-directed and Manny Coto-written "Drive-In." Combining excellent performances from the entire cast with some truly twisted takes on some commonly-known themes & narratives that help define the episode as a genuine product of our streaming society, the third episode of the streaming service's AHS spinoff anthology series continues to impress. Are you new to the AHS universe but nervous about jumping into nine previous seasons? Consider American Horror Stories your "gateway drug" to getting a better understanding of how the "Murphyverse" works.
Credits
Network/Streaming Service
FX on Hulu

What If…? Poster Proves Thor's Hammer is Good For Pointing at Things

With a new episode set to drop this Wednesday, Disney+ & Marvel Studios released new key art for What If...? showcasing Thor making a point.

What If…? Poster Proves Thor's Hammer is Good For Pointing at Things

With a new episode set to drop this Wednesday, Disney+ & Marvel Studios released new key art for What If...? showcasing Thor making a point.