Jersey Shore: Family Vacation may be taking a hiatus so they can film another two days' worth of footage and turn it into another half a season, but that doesn't mean that Jersey Shore fans will have nothing to do on Jerzdays, comrades. In fact, they'll have even more to do (in addition to gym, tanning, and laundry), because new seasons of Double Shot at Love and Floribama Shore premiered this week. You can read my glorious review of Floribama Shore here, but let's talk about Vinny's third chance at finding true love on an MTV dating show. What, you think it couldn't happen? Just look at Pauly D and Nikki, amigos! Haw haw haw haw!

Greetings comrades, it is I, your El Presidente, and Double Shot at Love Season 3 Episode 1, titled "Somebody's Future Wife is Here," was a weird one. It started off like any dating show does, by introducing all of the contestants. There are too many to go through here in one article, so I will the standouts who I would gladly invite to live in my palace as first ladies: podcast host Cortni Montgomery, whose jokes and bubbly personality charmed Vinny, Pauly, and Nikki into unanimously offering her the very first coffee date with Vinny, Emily "Peachy" Piccinonno, a Staten Island girl who made Vinny gush blood from his nose like a Dragon Ball character simply by talking to him, and Akielia Rucker, for whom this isn't her first MTV reality show rodeo, and who may be the target of not only Vinny's affections but the rest of the girls on the cast, who couldn't stop talking about her beauty and her prominent posterior.

Just as Jersey Shore fans met the cast, so did Vinny, Pauly, and Nikki. Pauly serves as the de facto host of the show, while Nikki's job is to guide the contestants in their quest to find love with a reality TV star at least ten years older than any of them. Vinny, of course, is the "prize," though he spent most of the episode riddled with anxiety. Vinny needed to leave the set twice during the show: once when his nose bled randomly while talking to Peachy, and later, at the end, when he had to choose the first of the seventeen contestants to eliminate. Vinny froze up at that point, then walked off with a producer, leaving the cast to act as they'd just witnessed a second 9/11.

The cliffhanger pretended that there might not even be a show if Vinny can't get it together, but of course next week it will be revealed to be nothing and the season will continue on. Double Shot at Love Season 3's premise is slightly watered down from the first season, where Vinny and Pauly were competing to find love with the same cast of women. It also lacks the familiarity of the second season, which featured some of the cast members from the first, added the Cujins, and basically tried to bring back the debauchery and drama of the original Jersey Shore with a younger cast who happened to be staying in a hotel suite with Vinny and Pauly. This time around, it's only Vinny looking for love, but when he doesn't seem that into it himself, it's a hard sell for the rest of us. But the teaser for the rest of the season offers hope in the form of lots of guest stars, so I'll reserve my judgment for now, comrades.

You have to hand it to Pauly D for trying to get his pal Vinny wifed up, comrades. My best friend, Putin, once claimed he wanted to do the same for me, but instead of potential future girlfriends, he sent me killer fembots outfitted with the latest Russian spyware. Oh, he almost got me, comrades, until I asked one of them to take a dip in my presidential hot tub and she started shooting sparks out of her ears. That Putin, always trying to hack everyone, even his friends. Haw haw haw haw! Until next time: socialism or death! 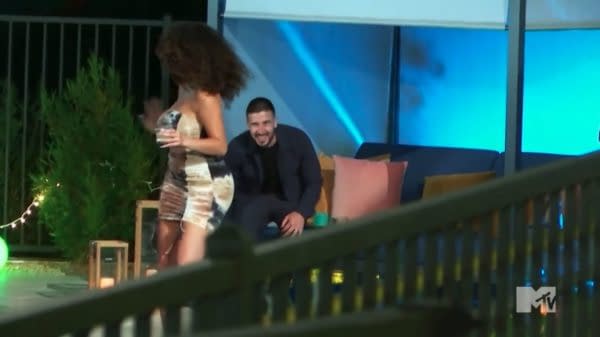 Review by El Presidente
5/10
The premiere of Double Shot at Love with Vinny and Pauly D Season 3 lacks the novelty of the first season and the charm of the second, but it does feature Vinny getting nosebleeds when talking to women like an anime character and the promise of some juicy guest stars later in the season.

This week's episode of Double Shot at Love on MTV featured increased drama as the battle for Jersey Shore star Vinny's heart intensified.

WWE Crown Jewel airs at noon Eastern on Thursday, October 21st. Here's the full match card and how you can watch the show, comrades.

For the Crown Jewel go-home episode of WWE Raw, WWE has booked a women's title match, King of the Ring and Queen's Crown semi-finals, and more.

The AEW World Title Eliminator Tournament will kick off on Rampage on Friday, with the finals set for Full Gear in November and the winner getting a title shot.

Jeremiah celebrated his birthday on this week's episode of Floribama Shore, but it was a pair of goats who had the most exciting adventure.

Angelina guest starred on this week's episode of Double Shot at Love, and she delivered the drama as promised.

With Doctor Who: Flux kicking off on October 31st, the BBC released a new set of preview images of Yaz, Dan, and Series 13's guest stars.

So what do you get when you cross Saturday Night Live host Jason Sudeikis' Ted Lasso with Matt Reeves' Robert Pattinson-starring The Batman?

In the following preview for AMC's The Walking Dead: World Beyond, Iris and Hope disagree on the best way to move forward against CRM.

Watchmen and Jessica Jones are just two of the five streaming & premium cable TV series that made our list of soundtracks worth a listen.

Inside Job star Brett Gelman talks psychic mushrooms, his love of Danny DeVito, and if Hollywood is really in on the world's conspiracies.