For months, Bleeding Cool TV Editor Ray Flook has forced The Chadster to watch and review AEW Dynamite and AEW Rampage, even knowing that Tony Khan has made it his personal mission to ruin The Chadster's life. In fact, The Chadster is pretty sure that Ray does it in purpose because he's in cahoots with Tony Khan. But The Chadster, ever the professional, was willing to set aside his Saturday plans of listening to Smashmouth on the car radio of his Mazda Miata while drinking White Claw seltzer alone in his garage to deliver the internet's only unbiased wrestling journalism. You're welcome.

Personally, The Chadster can't believe that on the weekend his girlfriend gives birth to their love child, Ric Flair is out there going alt-right and joining a Donald Trump rally. But what more can you expect from two former WWE guys like Ric Flair and Donald Trump. You can't trust anyone who leaves WWE, especially after WWE put them in the hall of fame. There's no loyalty in this business anymore.

Malakai Black defeated Dante Martin in the opening bout, a match that was so impressive that even earned a tiny nod of respect from Black to Martin after it was over. It didn't earn the respect of The Chadster though. What it did do was totally cheese The Chadster off. As a former WWE talent, Malakai Black should have faded away after being fired by WWE or maybe gotten a job at Impact. To go on AEW and put on world-class matches is incredibly disrespectful to Vince McMahon and his opinion that Black isn't a talent worth investing time into. These people act like Vince McMahon didn't personally pull wrestling up by its bootstraps and make it what it is today. It is so unfair!

The Inner Circle came out for a promo against American Top Team. The crowd was really into it. The Chadster was sobbing into his White Claw seltzer. How dare these legitimate MMA stars get involved with AEW! Didn't they see how well Cain Velasquez was treated in WWE? The Chadster is sure Smackdown would have loved to have American Top Team. Auugh! They left things off with plans for a ten-man tag match, with terms to be revealed next week.

FTR came out dressed as lucha frogs and beat the Lucha Brothers to win the AAA tag team championships, with a little help from Tully Blanchard. This just goes to show how biased everyone is against The Chadster's beloved WWE. When WWE wanted to repackage The Revival, everyone said that WWE's gimmicks were stupid, but AEW repackages FTR as the Super Frogs and everyone thinks that's the bee's knees? It's very unfair and biased is what it is.

Backstage, Lio Rush insinuated himself into a tag team with Dante Martin. Another former WWE star turning his back on the fans. It's so sad to see.

Andrade paid off MJF for letting him use FTR to screw over the Lucha Brothers, but that's nothing compared to the collusion going on between Tony Khan, the Neilsen ratings company, wrestling journalists, Bleeding Cool TV editor Ray Flook, and wrestling fans to make The Chadster's beloved WWE look bad.

Jon Moxley killed Wheeler Yuta in a squash match so badly Yuta needed medical attention afterward. Personally, The Chadster isn't a fan of this no-nonsense Jon Moxley. Can't Tony Khan book him to take a shot in his butt or something? Now that would be good stuff.

Hikaru Shida jumped Serene Deeb backstage. Can't anyone maintain order in AEW? They're out of control.

The Superkliq beat The Dark Order (John Silver, Evil Uno, and Alex Reynolds) in a six-man tag match. Jungle Boy chased off the heels with a steel chair after the match. As everyone knows, it really cheeses The Chadster off when AEW takes former WWE wrestlers and makes them into stars. But you know what cheeses The Chadster off even more? When AEW makes stars out of people who were never in WWE. That's even more disrespectful! Aughh!

Arn Anderson and the Nightmare Family continued to show Cody Rhodes tough love at the Nightmare Factory. Arn brought up his past feuds with Dusty Rhodes, which is really disrespectful because The Chadster is pretty sure WWE owns the trademark for Dusty Rhodes. What right do these guys have to mention him?!

MJF came out to run down the crowd and demand a referee count outDarby Allin for not being their for their match this week, even though the match was called off because MJF and the Pinnacle attacked Darby last week in the parking lot. But Sting came out with a baseball instead and beat up Wardlow. The Chadster threw his can of White Claw seltzer across the room because he was so angry, and then The Chadster was even angrier because Keighleyanne was like, "I'm not cleaning that up, Chad." So The Chadster had to clean it up. What is Tony Khan's problem?!

Britt Baker called Anna Jay a loser backstage and they fought over it.

Penelope Ford beat Kiera Hogan in a match that was four times as long as any of the Queen's Crown tournament matches so far, which The Chadster personally found extremely disrespectful to WWE.

Hangman Adam Page cut a babyface promo about everything he's been through since the start of AEW and promised to give his all when he faces Kenny Omega for the AEW Championship at Full Gear. The Chadster can't believe AEW has been running this storyline for two years, which basically spits in the face of everything Vince McMahon has taught us about wrestling, which is that wrestling fans have essentially the memories of a goldfish. But Tony Khan doesn't understand anything about the wrestling business so this is no surprise.

In the main event, Bryan Danielson beat Bobby Fish and CM Punk, who was on commentary, flagrantly violated WWE's trademarks by calling him Daniel Bryan. The Chadster hopes that WWE sues the crap out AEW, takes over the company, and cancels Dynamite for this. You really screwed up now, Tony Khan! Hahahaha!

AEW Dynamite was as personally offensive to The Chadster this week as it is every week, but somehow it was even worse because, thanks to Rampage on Friday and Dynamite on Saturday, AEW managed to ruin The Chadster's entire weekend! It's bad enough that AEW's mere existent has made The Chadster sexually impotent, but Tony Khan could at least let The Chadster enjoy drinking White Claw alone in his garage for a few days. But no. Tony Khan won't let his personal vendetta against The Chadster rest, even on a Saturday. And they're going to do it again next week too. Auuugggh man! So unfair! 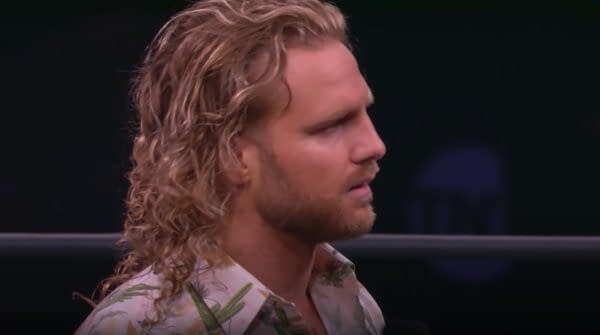 Review by Chad McMahon
7/10
Auuugh man! It's so unfair!

WWE Raw scored its lowest-ever demo rating thanks to collusion between Tony Khan, Neilsen, the wrestling media, the NFL, and the Bravo TV Network.

WWE has announced the first class of fifteen college athletes signed as part of the company's new NIL program. Auughhh man! So lucky!

WWE Raw: Are Becky Lynch and Liv Morgan the New Trish and Lita?

It's clear after their WWE Raw main event that Liv Morgan and Becky Lynch are the next Trish Stratus and Lita, except better. The Chadster explains.

WWE Raw: Edge vs. The Miz is a Feud 15 Years in the Making

WWE once again proved they do long term booking better than AEW during Miz TV on WWE Raw last night, and The Chadster is so proud of them.

Christmas has come early for The Chadster as WWE has an incredible show booked for tonight's episode of WWE Raw. Here's the lineup.