Since more or less the start of the pandemic, AEW has broadcast episodes of AEW Dynamite from Daily's Place in Jacksonville, first in front of wrestlers pretending to be a crowd, and then in front of an actual crowd. The Chadster has found the whole thing to be quite unfair to WWE, who put on shows in front of empty buildings and later video screens in the WWE Thunderdome. Why should AEW be allowed to seem more exciting than WWE when WWE is the biggest wrestling company in the world? It's another example of Tony Khan overstepping his boundaries in the wrestling business.

But that's not even the thing that grinds The Chadster's gears the most. AEW will take Dynamite on the road next week, once again beating WWE by going back on tour first. It's incredibly disrespectful to Vince McMahon, and, personally, The Chadster sees why Vince gets so mad he has to fire half his roster every couple of months. Tony Khan gets The Chadster all riled up too, Vince. Anyway, this week was the final episode to emanate from Daily's Place as part of this run, with that traitor Chris Jericho joining the commentary team like he frequently did at the start of the pandemic, and The Chadster hated this episode even more than usual.

Penta El Zero Miedo and Eddie Kingston defeated the Young Bucks in a non-title tag team match with help from Frankie Kazarian, who neutralized Brandon Cutler. Kingston and Penta earned a title shot for next week thanks to the win. The Chadster didn't appreciate how exciting this match was as a show opener since it sets a precedent for wrestling shows to open with an action-packed match instead of long and drawn-out promo by Roman Reigns or Drew McIntyre like they're supposed to. But it's hard for The Chadster to be too mad at the Young Bucks when they're rocking such fashionable new mustaches.

While Ethan Page was cutting a promo on Darby Allin, Sting came out dragging a coffin. After some video of Allin lighting a coffin on fire, he popped out of Sting's coffin and attacked Page, with help from Sting to take out Scorpio Sky. As a result of the attack, Page postponed the coffin match with Allin. The Chadster can definitely get behind a good bait and switch, which is one of the cornerstones of wrestling, but where does AEW get off stealing The Undertaker's gimmick match?

Jungle Boy beat Jack Evans in a match to get his momentum back after he lost to Kenny Omega last Saturday. After the match, The Hardy Family Office attacked, only for Luchasaurus, Marko Stunt, and Christian Cage (who revealed in a pre-match promo he's part dinosaur on his mother's side) to make the save. The Chadster doesn't think this kind of silliness belongs in pro wrestling. Magical dolls with mind control powers? Absolutely. But dinosaurs? Come on.

MJF cut a promo running down Chris Jericho and Sammy Guevara, all leading up to MJF's big blowoff match against Jericho, the stipulations for which will be revealed next week. Stellar use of veterans is one of the things The Chadster really can't stand about AEW Dynamite. First they use Sting to help get Darby Allin over, and then they have an amazing match to put Jungle Boy over as the future, and then follow it up with a classic battle between Christian Cage and Matt Hardy. And then that all leads into an incredible MJF promo as he feuds with the legend Chris Jericho. This sends the message that AEW's current stars are as important as the stars of wrestling's past, which The Chadster knows from years of watching WWE couldn't be further from the truth. The stars of the Attitude Era, even in their current geriatric state, are miles better than current wrestlers and should always get the best of them in physical altercations. Doesn't Tony Khan know how to do anything right?!

Andrade cut a promo ahead of his in-ring debut with Matt Sydal next week. AEW added subtitles so Andrade could go back and forth between English and Spanish, which is incredibly disrespectful. If AEW is gonna let Andrade cut a good promo like that, they should at least wait a while so it doesn't seem like WWE was holding him back this whole time.

Tony Schiavone interviewed Kenny Omega, who claimed there are no challengers for him left on AEW Dynamite. Well, of course not, Kenny. WWE is where the big boys play. Maybe you could try for the Cruiserweight belt there? But no, The Dark Order came out and hyped up Hangman Page as Kenny's next challenger. Kenny said Page isn't up to it. Later on in the night, Page confronted the Dark Order backstage and they all offered him positive reassurance. This feud has been building for like a year and a half, which is about a year and five months longer than the attention span of the average wrestling fan, at least according to what WWE has taught The Chadster over the years. AEW fails yet again. You suck, Tony Khan. Excuse The Chadster's language, but it had to be said.

Brian Pillman Jr. put up a good fight but ultimately got crushed by Miro. Miro is another guy who was a joke in WWE, came to AEW, and is now booked like a monster. That's really disrespectful to Vince McMahon's vision. On the bright side, now that Lana has also been released by WWE, maybe AEW can hire her for a cuck angle. The Chadster is really into the cuck angles.

Taz announced a match between Ricky Starks and Brian Cage in two weeks. A stable breaking up before they've even accomplished anything? Now this, The Chadster can get behind.

Britt Baker made Vicki Guererro tap out in a tag team match where Rebel dislocated her kneecap breaking up a pin. Vicki's partner, Nyla Rose, attacked Baker after the match and powerbombed her through a table. Is Britt Baker a heel or a face? The Chadster enjoys ambiguous, almost schizophrenic book as much as the next WWE fan, but maybe AEW should leave this to the professionals lest anyone else get hurt.

Sammy Guevara and MJF faced off in an offensively great match filled with nonstop action. The match was extra insulting to WWE fans because Sammy and MJF did a similar spot to the one Ricochet and John Morrison did on Raw earlier this week, but instead of Morrison hitting a crossbody from the ring to the Thunderdome crowd area onto obvious crash pads, Sammy did a flip from the top rope over the guardrail onto MJF right in between some fans. Making matters worse, instead of ending in a double countout. both men made it back into the ring and the match continued. What is your problem, Tony Khan?! Can't you let The Chadster and his beloved WWE have anything?!

The only saving grace of the match is that it ended in a screwjob finish when Wardlow tossed Chris Jericho off a stage, distracting the referee while Shawn Spears whacked Sammy in the head with a steel chair.

The show ended with a video remembering all the memorable things that happened in Jacksonville. The Chadster hated every moment of it. Except the Brodie Lee stuff, of course.

AEW Dynamite this week was the perfect end to the Daily's Place era, cheesing The Chadster off by disrespecting WWE with great wrestling and exciting storylines from start to finish. And to top it off, Jim Ross violated WWE's trademarks while calling the show WWE Dynamite. You wish, JR. 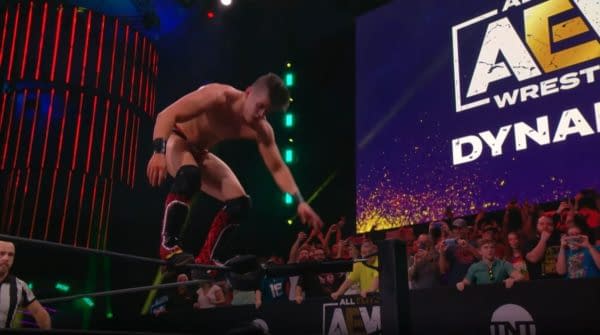 Review by Chad McMahon
7.5/10
AEW Dynamite this week was the perfect end to the Daily's Place era, cheesing The Chadster off by disrespecting WWE with great wrestling and exciting storylines from start to finish. And to top it off, Jim Ross violated WWE's trademarks while calling the show WWE Dynamite. You wish, JR.
Credits
Promotion
AEW
Network
TNT
Public Enemy #1
Tony Khan

In the worst thing that has ever happened to The Chadster in The Chadster's life, AEW Dynamite defeated WWE Raw in the wrestling ratings this week. Auughh!

The Walking Dead: AMC Releases Season 11 E05 "Out of the Ashes" Promo

Negan & Maggie keep on truckin', Alexandria defends itself, and Commonwealth orientation begins in the following promo for The Walking Dead.

With filming having wrapped last month, Seth MacFarlane shared a video announcing that scoring for The Orville Season 3 was underway.

Roman Reigns vs. Brock Lesnar Will Happen in Saudi Arabia

Roman Reigns will defend the WWE Universal Championship against Brock Lesnar in Saudi Arabia at Crown Jewel in October.

A League of Their Own Releases Character Details; 5 More Join Cast

Amazon, Sony TV, Abbi Jacobson & Will Graham's A League of Their Own series take welcomed 5 more to the cast and released character details.

Returning for Season 3 on October 13, The CW released the key art poster for Batwoman showing Javicia Leslie's Ryan Wilder "Out for Justice."