Paramount+'s Evil is a perfect example of how a move from a broadcast platform to a streamer can improve the show. In this instance, the move was from CBS to the streaming service so it was within the same ViacomCBS family. While season one was dark enough by broadcast standards, the second season improved upon things by exploring its supernatural sandbox more in refreshing ways while adopting saltier language and grittier themes- all without the "standards and practices" that come with broadcast networks.

The Evolution of Evil

Let's make no mistake, it can't hold a candle to the deviousness of shows like FX's American Horror Story, but it's making more inroads blurring the moral ambiguity of its main characters. While season one scratched the surface at times, the end of the second saw the lines discernibly blurred. Primarily driven by performances of Katja Herbers and Mike Colter as Kristen and David, the two showed a natural evolution as their convictions within their faith were challenged like never before. Kristen's grown significantly more agnostic from her initial atheism. We also see David taking on issues from various angles beyond just a character trying to become ordained as a Catholic priest- he's become a man of faith looking beyond his faith.

Evil also saw bigger involvement from Aasif Mandvi's Ben, who got in on more than his fair share of the season's darkest arcs- demonic torture, possession, elevator death trap, and more. He definitely helped bring the horror movie feel to the series. As for Michael Emerson's Leland Townsend, I credit the way creators Robert & Michelle King gave him a more centralized arc as a more fleshed-out character with a greater purpose than the simple impish "devil" vibes of the first season. I'm also intrigued about what will happen in the long game for Christine Lahti's Sheryl and her involvement in his group. Season one nicely established the characters but aside from a couple of plot points, you miss very little if you start off with the second season instead. It's definitely an improvement and I look forward to season three (and make sure to check out our interviews with Emerson and Lahti) 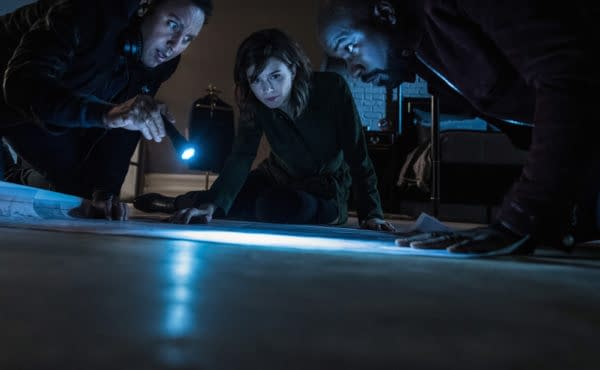 Review by Tom Chang
8/10
Turns out Paramount+ was the proper home for the supernatural horror series Evil all along. Creators Robert and Michelle King turned the corner, allowing all the show's main players (Katja Herbers, Mike Colter, Aasif Mandvi, Christine Lahti, and Michael Emerson) to shine in their own right growing while showing off the creative advantages that come with a move to streaming.
Credits
Creators
Robert and Michelle King

Andor: Tony Gilroy Wanted Approach to Rogue One Prequel "To Be Real"

Andor EP & showrunner Tony Gilroy explained how he got his team to set aside their Star Wars fandom during their work on the Disney+ series.

With Billy Eichner still out there promoting his rom-com Bros, we're getting a new episode of Billy on the Street with Jack Black on Monday.

The Sandman S02: Neil Gaiman Explains Why No News at Netflix's Tudum

If you're like us and found the lack of The Sandman Season 2 news at Netflix's Tudum unsettling, Neil Gaiman explains why we can relax.

The Makanai: Cooking for the Maiko House Set for 2023 Netflix Release

Netflix's The Makanai: Cooking for the Maiko House is a live-action adaptation of the bestselling manga with Nana Mori & Natsuki Deguchi.