Paramount+'s Evil S03E08 "The Demon of Parenthood" advances some existing narratives and manages to significantly step up the bar on disturbing visuals. Upon a variety of subjects include Kristen's (Katja Herbers), her impasse of trust with David (Mike Colter), investigating potentially demonic toys, fertility, and going further down the occultist rabbit hole for Kurt (Kurt Fuller). This is your minor spoilers warning.

I do have to touch upon the giant visual of the week. So demonic forces of George (Marti Matulis) have been visiting Kristen in her dreams again passively and directly. In one particular instance, she finds a malformed demonic infant in a travel carrier (as we teased in the feature image to this review). It's crying, so she tries giving it a pacifier, but when that doesn't work, she breastfeeds it instead. Physical Kristen has no control over her dream counterpart. It's not really a driving plot point, more so the fact it's the Kings' poking and prodding the senses. I can only imagine how fascinating it must be for Herbers to play this up because finding projects that are anywhere near as provocative and creatively juicy as the Paramount+ series is a tough task.

David's ongoing arc in Evil appears to have him playing a secret agent for the Catholic Church and… specifically, Brian D'Arcy James' Victor LeConte, who's always testing the limits of his loyalty. While absurd is a second language in the series, Victor tasks David to follow cryptic messaging to some greater narrative that tinges more on coincidence than mere faith. Then again, it doesn't really take much for conspiracies to ever take root on the show. Ben (Aasif Mandvi) tries to find out why toys are not functioning as intended. For example, he deals with a wand that plays demonic pre-generated audio clips and one Magic-8 Ball-like toy of interest with macabre results. It's nothing that particularly advances his story, but more so gives him something to do. In fact, it has zero do with anything in the greater plot.

One storyline thread that's showing a lot of potential, for now, is how much Leland (Michael Emerson) has the ear of Kurt on writing his book on spirituality. Kurt seems rather aloof about how it potentially affects his body as he constantly seeks inspiration from his muse. Because he's not approaching it as a scientific professional, Kurt would never need to explore both sides if he's just happy going down the demonic rabbit hole. I'm also glad they're giving Maddy Crocco more to do on the show now since she's become more a "person of interest" given Lexis' background from a fertility clinic. It feels like with two episodes to go in the season, the finale might be tied to Crocco and Fuller's characters. Directed by Aisha Tyler and written by Sarah Acosta, "The Demon of Parenthood" ups the ante for Evil as far as shock value and narrative building. Let's hope it sticks the landing because the series can feel a bit discombobulated at times. 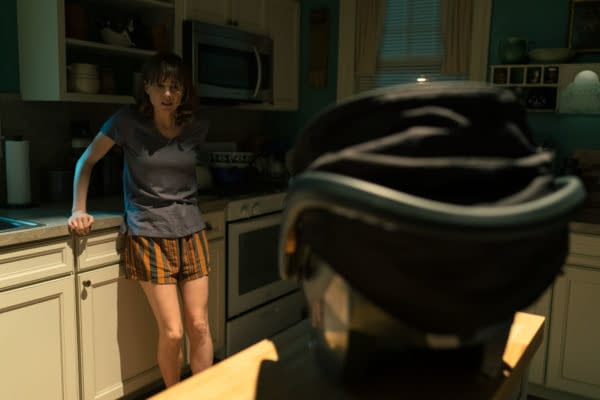 Review by Tom Chang
8/10
Director Aisha Tyler and writer Sarah Acosta certainly made the most out of a demon baby and a magic-8 ball as Paramount+'s Evil steps up on the visuals & plot twists with only two episodes remaining. And from what we've seen so far, it could prove a very interesting run for Katja Herbers, Mike Colter, Maddy Crocco, Kurt Fuller, Michael Emerson, and Christine Lahti's characters.
Credits
Director
Aisha Tyler

Ms. Marvel writer Fatimah Asghar would love for Kamala Khan to go on an adventure with the X-Men or Wolverine in a future MCU project.

Sean Kanan took to social media to confirm & comment on his return as Mike Barnes, going from The Karate Kid Part III to Netflix's Cobra Kai.

Returning on September 4, the official trailer for Adult Swim's Rick and Morty Season 6 finds the family on the run from all sorts of danger.