You can argue that the Paramount+ supernatural series Evil has tackled the subject of cults before, but the episode "The Demon of Cults" offers a more direct approach. Kristen (Katja Herbers), David (Mike Colter), and Ben (Aasif Mandvi) are sent to investigate a young man Owen (Kevin Paul), believed to be possessed, who also has ties to a group believed to be a cult. The cold opening shows Victor (Brian d'Arcy James) giving David a wind-up toy owl to slip to Kristen's daughter Lexis (Maddy Crocco), who's a byproduct of the fertility clinic that the group was previous investigating. Consider this your minor spoilers warning moving forward…

The trio begins talking to the doctor and author, who hosted a seminar on cults showing them a roleplaying exercise. Following the seminar, he informs them of the young man he's holding captive with his parents' consent. He tells them of the group he believes is a cult and lives in a commune. Upon meeting him, he shows the usual symptoms of speaking in tongues and a playful hostile tone. As the trio visits the group, they get acclimated to their rituals and practices. Among the participants is their leader Renee (Gia Crovatin), who Ben met at a science league his sister acclimated him to.

The scenes involving the cult and exorcism were pretty standard and nothing really groundbreaking. There aren't even really any jump scares or anything to really build up to because trances are pretty common up to this point among the affected. The real meat of the episode, aside from the hijinks that Ben finds himself in, is the developing arc with Dr. Kurt Boggs (Kurt Fuller). Dr. Boggs feels the need to combine his latest experiences involving Sister Andrea (Andrea Martin) and her visions of demons into perspective with his epiphany. Rather than just applying the experience to his own path to God, as Sister Andrea suggested, he decides to write a book about spirituality. And his muse? None other than Leland Townsend (Michael Emerson), with Leland introducing him to some unconventional methods… including a candle, blood drops on his laptop, a toy, and a record of the French song "Alouette" to play.

It gets pretty far out there in terms of the sequence that plays out, but Fuller does a commendable job with the process that finally sees him directly involved with the show's macabre subject matter. Written by Louisa Hill and directed by Fong-Yee Yap, it will be interesting to see how far down the rabbit hole Boggs will go and where they'll go with Lexis' arc from this point forward. Can't say enough about how Herbers, Colter, and Mandvi keep bringing it with each episode and how the inner conflicts that each of them is dealing with play to each actor's strengths. And the show's ability to find new and twisted ways to keep Emerson's Leland involved also continues to amaze. Evil Season 3 streams Thursdays on Paramount+ (with the first two seasons also available). 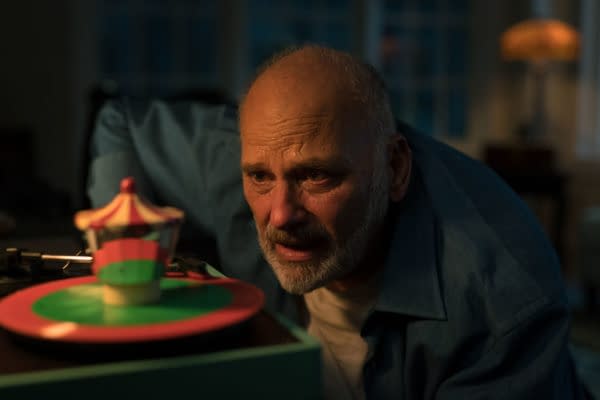 Review by Tom Chang
7.5/10
While Katja Herbers, Mike Colter, and Aasif Mandvi investigating a possible cult & demonic possession isn't particularly new ground for the Paramount+ supernatural series Evil to cover, the developments we witnessed with Kurt Fuller's Dr. Kurt Boggs and Maddy Crocco's Lexis will be fascinating to follow up on as we get closer to the season finale.
Credits
Director
Fong-Yee Yap

The Orville: New Horizons' Seth MacFarlane says, "Season 4 is a blank slate," but getting renewed would help fill in some of those blanks.

The Orville: New Horizons' Seth MacFarlane says, "Season 4 is a blank slate," but getting renewed would help fill in some of those blanks.

Four years after it was announced a "Buffy the Vampire Slayer" reboot was in development, it seems the project is officially "on pause."