Greetings, comrades! It is I, your El Presidente, and I am pretty sure that the cast of MTV's Floribama Shore is taking this whole spirit of Christmas thing too seriously! Sure, peace on Earth and goodwill toward men is nice but even better is getting wasted and fighting with your roommates over petty drama, which is the whole reason this show exists! Unfortunately, while everyone is great at the getting wasted part, this season has been all-too lovey-dovey, and this episode does nothing to change that trajectory.

Floribama Shore Season 4 Episode 24 "Floribama Shower" starts off on a terrible note, paying off the tease of potential drama between Gus's sister Hannah and cast member Candace by having Hannah apologize unequivocally to Candace for threatening her last half-season, an apology which Candace graciously accepted, and that set the whole tone for the episode!

As the roommates got drunk with their families, the spirit of love was in the air. There was Candace's mom lusting over Jeremiah. Papa Butts doing his best to patch up differences between Gus and Jeremiah. Candace's dad tells her to be more forgiving of her roommates. Are you people trying to ruin the show?! Come on!

The next morning, the roommates had trouble waking up, having been drunk under the table by their parents. Once everyone got going, it was time for Nilsa's baby shower, at which alcohol was forbidden, forcing roommates and parents to get drunk in the confessional booth instead. A gift-opening session culminated with a custom-printed photo book Kirk gifted Nilsa's unborn child featuring photos and life advice from each of the castmates, and at that point, comrades, I ordered my guards to have the television executed immediately! Then I had them bring me another one because I still had Double Shot at Love to watch.

This week's episode of Floribama Shore just proves that MTV has forgotten what this show is supposed to be about. It may be time to find some new naive twenty-somethings with poor judgment and no inhibitions to reboot this whole thing. Either that, or it's time to lock Gus and Jeremiah in a room with a switchblade. Whatever it takes to turn this thing around because I can't handle this! Until next time, mis amigos: socialism or death! 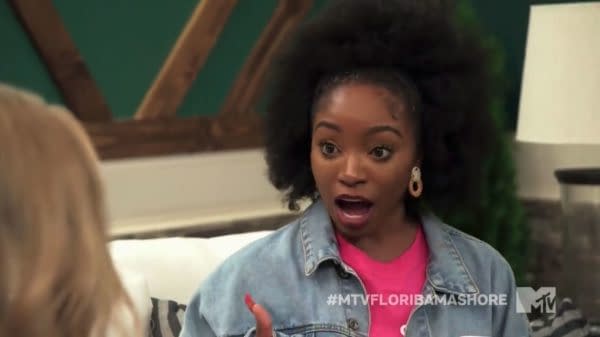 Review by El Presidente
3.5/10
This week's episode of Floribama Shore just proves that MTV has forgotten what this show is supposed to be about.