Hawkeye episodes one and two are an absolutely awesome blend of the Matt Fraction/David Aja series and Christmas. Fans of Clint Barton are finally getting the character they've been waiting for in live-action, and Kate Bishop is about to become everyone's new favorite Marvel hero. The Marvel television shows have been all over the place so far. WandaVision was more or less a slam dunk, The Falcon and the Winter Soldier and Loki both started off strong and eventually weren't able to stick the landing, and What If…? was a mess [don't @ me]. Hawkeye is the final show of 2021, and while this could once again be a show that starts off strong but isn't able to stick the landing, this might be the best start to a series so far.

The opening scene is the kind of scene that we've been waiting for when it comes to these shows and exactly how Marvel should go about introducing new characters to a universe that has existed for so long. The nods to previous things in the Marvel Cinematic Universe are very much there, but fans of the Marvel Netflix shows are going to find a lot to love here. Earlier this month, Eternals dealt with the concept of God and creation itself. Meanwhile, in Hawkeye, Clint and Kate are trying to takedown the tracksuit mafia. It's a nice reminder that while the world might be ending in the movies, there are smaller things going on in this world that need to be addressed.

One of the many things that made the Fraction/Aja run of Hawkeye so amazing was that Clint is a human disaster. He's a giant mess of a human being who is just trying so hard and failing so often to do some good. In the series, he's trying to protect an apartment building from the tracksuit mafia. This time, he's trying to protect Kate, who has managed to get herself involved with said tracksuit mafia. Clint and Kate are in a competition to see who is going to be the biggest disaster out of the two of them. Clint is carrying that slightly grumpy dad energy where he just doesn't have the energy or the will to humor anyone, anymore. On the other hand, Kate is out here trying her very best and not realizing the consequences of her own actions. Lucky the Pizza dog is here to be the embodiment of perfection as he should be [one of the goodest boys in Marvel].

It is likely going to take some people by surprise that Hawkeye is much more about Kate than it is about Clint. We are witnessing her origin story with Clint on hand as the mentor. He's bringing some big dad energy to the proceedings, which just adds to the humor of the entire thing. Hawkeye is funny in a way that doesn't feel forced. The dynamic between Jeremy Renner and Hailee Steinfeld is just naturally very funny. Their back and forth is very believable, and you want them to be friends just as much as you want Clint to make it back to his family for Christmas. The various situations that the two of them get into are also ripe for comedy, including a scene in episode two that is going to make some serious nerds laugh for days.

Hawkeye will be a shorter series than the others, so these first two episodes don't spend a lot of time not doing anything. The plot gets going almost right away, and by the end of episode two, the stakes are very clear, along with what has to happen to fix said stakes. Or at least, the stakes that we are currently aware of, there are probably more waiting around the corner. However, there are only four more episodes to go, so there isn't time for filler in these first two episodes, and there is a good chance that there won't be the time in the other episodes as well. That is one of the benefits of a shorter series like this; you need to tell your story well and within a strict time frame.

The supporting cast is also putting in some serious work though we haven't spent much time with several of them. One of those people we haven't seen much of yet is Alaqua Cox as Maya Lopez. However, in the brief moment, she does appear on screen, she has some serious screen presence. There is a reason that Marvel took one look at her and offered her a spinoff show. Vera Farmiga continues to be amazing in literally everything that she is in, and seeing her as Eleanor Bishop is a joy. She is a great example of a mom who is willing to support her daughter's endeavors, but she also isn't a pushover as well. Tony Dalton as Jack Duquesne makes an immediate impression, and you know from the moment he appears on screen, that something is off about this guy. Kate seems to know it too, but it's interesting to watch her instinct come up against her own personal issues when it comes to Jack.

If Hawkeye is able to keep up the same energy it has in these first two episodes in the final four, we might be looking at the best Marvel series to date. It's funny, heartwarming, and it is so amazing to see Marvel once again embrace some achingly human characters who have lots of faults and failures under their belt. If you've been wondering why comic fans have been trying to convince you that Clint Barton is an awesome character and Kate Bishop is an actual angel, this series is going to explain all of that to you. As for established fans of both of these characters, like yours truly, it's truly lovely to see them both so lovingly adapted to the big screen. 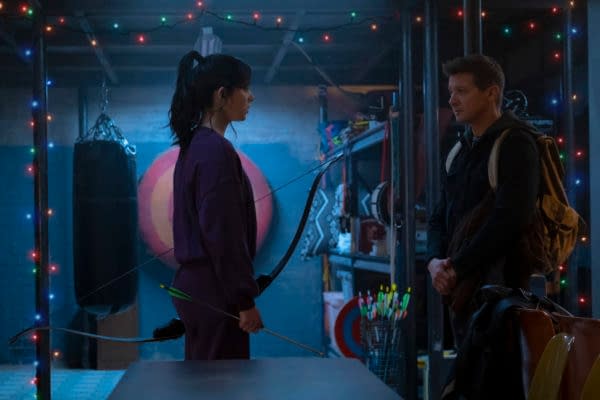 Review by Kaitlyn Booth
9.5/10
The first two episodes of Disney+ & Marvel Studios' Hawkeye are an absolutely awesome blend of the Matt Fraction/David Aja series and Christmas. Fans of Clint Barton are finally getting the character they've been waiting for in live-action and Kate Bishop is about to become everyone's new favorite Marvel hero.

The Tender Bar Review: Mediocre Despite A Few Standout Performances

The Tender Bar might have a few standout performances, but director George Clooney makes a series of baffling decisions that causes this film to feel

Nightmare Alley director Guillermo del Toro talks about his new approach to At the Mountains of Madness and how he needs to rewrite his 2006 script.

8-Bit Christmas Review: Not Exactly A Classic, But Pretty Entertaining

8-Bit Christmas isn't going to change anyone's life or become a new holiday classic, but it's pretty cute and comes out in the eleventh hour to really

Production Has Officially Has Started for the HBO Max Batgirl Movie

The Batgirl movie has had a hard time getting to the big screen, and that is saying something considering some of the DC projects that have really

The Matrix Resurrections might be one of the most mysterious movies coming out in 2021. Warner Bros. has done, at the time of writing, this could change,

There has been a change in the cast of Furiosa. The spin-off from the absolutely fantastic Mad Max: Fury Road has had a bit of a hard time getting to the

In this preview for the next Riverdale, Cheryl summons a familiar face to Rivervale. But is Sabrina Spellman there to help or add to the CAOS?

In the following sneak preview for FXX's It's Always Sunny in Philadelphia Season 15, it appears Frank visited Rudy Giuliani's hairdresser.

"Mayfair Witches" Gets AMC Order, Joins "Interview With the Vampire"

Anne Rice’s Lives of the Mayfair Witches is officially set to join the upcoming Interview With the Vampire series at AMC.

The recap of this week's NXT 2.0, which featured a Ladder Match to determine the advantage in each WarGames match this Sunday.

The Marvelous Mrs. Maisel: Amazon Offers Up Another Season 4 Teaser

A second teaser for Amazon's The Marvelous Mrs. Maisel Season 4 hit the internet earlier today with the series set to return on February 18th.

The Walking Dead: Scott M. Gimple confirmed that this Sunday's Talking Dead announcement will not be related to the Rick Grimes films.