It seems like no matter what happens for Michael Burnham (Sonequa Martin-Green), there will always be a cloud of doubt that shrouds her in Starfleet even as the now-captain of the U.S.S. Discovery. The fourth season premiere of Star Trek: Discovery "Kobayashi Maru" finds the crew's time as the toast of the Federation short-lived as they get busy redistributing dilithium to their member planets. Their latest crisis takes them trying to save a space station in danger.

Accompanying Discovery on their mission is Federation President Laira Rillak (Chelah Horsdal), who essentially acts as unofficial first officer undermining the orders from the ship's new captain and obviously there to create the needed tension for the premiere. Horsdal and Martin-Green do a great job of playing off one another in high-tension situations. There are other arcs that focus on Cleveland Booker (David Ajala) and Saru (Doug Jones) on their respective home planets that provide the occasional change of pace.

Directed by Olatunde Osunsanmi and written by Jenny Lumet and EPs Michelle Paradise and Alex Kurtzman, the premiere allows everyone in the core cast to shine including, Mary Wiseman and Blu del Barrio. Also noteworthy when it comes to season-long ramifications was Rodrigo Fernandez-Stoll as station commander Nalas. Though appearing to be an initial isolated incident, the episode did an excellent job beginning to weave together the threads of the latest galactic-wide crisis that our heroes will have to face.

If there's one gripe I have, it's that even for the convenience of the plot, memories still seem to get very, very short when it comes to remembering what the Discovery has already been through. While I realize there are still figures within the 32nd century that need time to trust the temporal visitors, it still feels like there's a ton of bureaucratic pretentiousness & condescension from the established ranks. Even if Rillak somehow skimmed the Federation logs of thousands of ships, there's literally no empathy or benefit of the doubt given to her command peer. That's a lot to swallow even for an underdeveloped character who can't recognize that every higher level Starfleet officer at one point has had to confront the "Kobayashi Maru" in franchise lore. Aside from that lone gripe, it's a strong premiere to kick off the season. Star Trek: Discovery airs Thursdays on Paramount+. 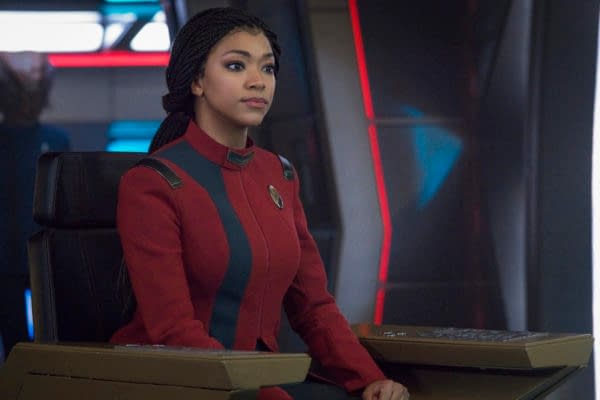