The fourth episode of Star Trek: Lower Decks' second season "Mugato, Gumato" revisits another The Original Series species (perhaps once forgotten) in the Mugato. The title alludes to a TOS second season episode "A Private Little War" and the ape-type species that are as vicious as they are poisonous. The title of the Lower Decks episode also alludes to the Mugato's original name: Gumato. It was later changed to Mugato due to Dr. Leonard McCoy actor DeForest Kelley's mispronunciation of the race and it has stuck ever since.

"Mugato, Gumato" sends the U.S.S. Cerritos off to investigate a rare sighting of the Mugato. Capt. Freeman (Dawnn Lewis) sends Lt. Shaxs (Fred Tatasciore) to lead the away team with Mariner (Tawny Newsome), Boimler (Jack Quaid), and Rutherford (Eugene Cordero) on the planet surface. The B-arc finds Boimler and Rutherford paranoid of Mariner's "quite vivid" past after reading up on her dossier. It's something that can be rectified with actual communication, of course. But given how it's a sitcom (even an animated one), they jump to their own conclusions and neurotic humor ensues. The third arc finds Dr. T'Ana (Gillian Vigman) tasking Tendi (Noël Wells) to perform a medical scan of every member of the crew on the list which felt more like filler but was mildly amusing.

Searching for mugatos. See how @TitmouseInc brings this scene from the latest episode of #StarTrekLowerDecks to life from animatics to final animation. pic.twitter.com/UxQb9Imoce

The episode provided a moment for Cordero and Codero to shine in their respective roles, while Newsome's insecure Mariner tries to figure out why her crewmates suddenly don't trust her. It's a narrative that's stretched out without feeling dragging out, ad nauseam- thought there were signs. We also get reintroduced to the Ferengi, another neglected race from the current Star Trek canon. Hey, maybe we can see them and the Cardassians once again in the live-action shows like Picard and Strange New Worlds. Directed by Jason Zurek and written by Ben Rodgers, "Mugato, Gumato" doesn't really break any ground and relies on usual tropes of the series. While we can't have every episode be canon-intensive and knee-deep in "Star Trek" lore, too many episodes such as these can take away from the unique "Star Trek" aspect of the series overall. New episodes of Star Trek: Lower Decks stream Thursdays on Paramount+. 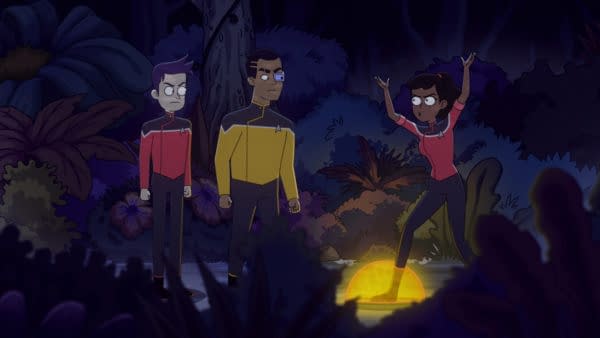 Review by Tom Chang
5/10
An average episode for Star Trek: Lower Decks, "Mugato, Gumato" revisits a creature introduced in The Original Series to predictable results. It's nothing really novel to offer that it hasn't before, and leaves me a bit concerned about the season overall so far.
Credits
Director
Jason Zurek