The second episode of the second season of Star Trek: Lower Decks opened a can of worms it's unable to really solve in terms of old versus new Trek canon. While it's unapologetic as far as its comedic aspects of the show, the animated series actually dared cross into the franchise's original more serious nature with the current sci-fi trend of over-the-top action driving the narrative. This is your minor spoiler warning to set the scene of "Kayshon, His Eyes Open."

The episode starts with two new crew members introduced to the U.S.S. Cerritos, starting with the ship's new security officer Lt. Kayshon (Carl Tart), the first known Tamarian Starfleet officer. The species was introduced in Next Generation where their metaphor-based English language was originally lost on the crew of the U.S.S. Enterprise-D before Capt. Picard (Patrick Stewart) was able to finally communicate. For the purpose of not rinse-and-repeating the same issues, the series gave Kayshon a universal translator that renders specific linguistic characteristics inert for the convenience of the script.

The other crew member, which has taken over Boimler's (Jack Quaid) spot is Lt. Jet Manhaver (Marcus Henderson) much to Mariner's (Tawny Newsome) dismay. While far less neurotic than Boimler, Jet is overly competitive and too by-the-book for Mariner's tastes that result in an off-the-wall awkward moment at the seldom-seen sonic showers. The arcs that involve the lower decks' crew take them to a collector that makes for a convenient plot device that turns a bunch of random objects into a giant death trap and of course your usual hodgepodge of Easter Eggs from past canon including one made by a memorable headset that one Wesley Crusher (Wil Wheaton) had to save his crewmates from in a TNG episode.

The B-story involves the two aspects of Trek that traditionalists and modern fans often find each other at odds with, which is the exploration aspect versus the action that drives the franchise. While the action was always part of the franchise, which provided some of the most memorable scenes of The Original Series, it was always balanced out by brainstorming to solve unique phenomena that often plague the crew. It was a formula that was retained during the TOS films, but sadly largely deviated from since the TNG films and into the J. J. Abrams Kelvin Universe reboot films. The more action-oriented nature has also created more elaborate fight choreography like that in newer series like Discovery and Picard.

In the context of Boimler, he sees (perhaps like traditional Star Trek fans see with the franchise) that what he signed up for isn't turning out as he hoped. Serving on board the U.S.S. Titan is where members of the crew lean far more on tactical methods and displays of brute strength to get through the threats they face. It's a can of worms they opened up, but never really address as plot sort of bottled it back up to another Easter Egg-type of twist. It just barely scratched the surface of its existentialism. New episodes of Star Trek: Lower Decks stream Thursdays on Paramount+. 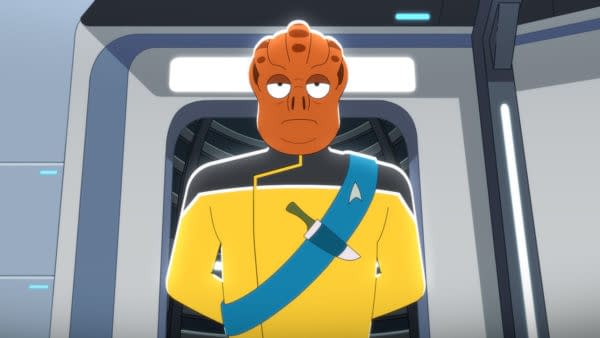 Review by Tom Chang
6.5/10
Nothing really shattering about the Star Trek: Lower Decks episode. It had an opportunity to resolve its own existentialism, but left us hanging with Boimler. It delivered otherwise as expected for the action-oriented animated comedy.
Credits
Director
Kim Arndt

In this mini-teaser for FXX's Archer, Sterling learns quickly that Lana doesn't care about his 10 steps to keeping "moist yet firm skin."

Is the love affair between CM Punk and AEW over? His comments on Dynamite about Adam Page were reportedly a shoot, with Punk vs. Moxley moved from All Out to Dynamite.