The latest episode of Star Trek: Lower Decks in "We'll Always Have Tom Paris" deals with two separate existential crises, one deals with Rutherford (Eugene Cordero) and his problem with a once-thought dead crew member and the other is more played for laughs with Boimler's (Jack Quaid) and a computer glitch that chooses not to recognize his presence having been away from the U.S.S. Cerritos for so long. The main arc deals with an away mission with Tendi (Noël Wells) and Mariner (Tawny Newsome). Likewise, there will be some spoilers from here on out.

As the title suggests, Robert Duncan McNeill makes his Star Trek franchise return as Lt. Tom Paris and as youthful as his Voyager days with the magic of animation. While director Bob Suarez and writer M. Willis could have come up with something more relevant for Tom to do relating to some mission, "bragging and showing off his awesome skills on the bridge" seems to be more than enough for a comedy such as Lower Decks. Aside from serving as a distraction for the bridge crew, the U.S.S. Voyager helmsman also offered motivation in plate form to the neurotic hallucinating Boimler when he was stuck in the Jeffrey's Tube while trying to figure out why the ship's computer won't recognize his physical presence.

Aside from Boimler's problems, the series touches on how the franchise deals with death and return or rather its lack thereof in coping. We're placed in Rutherford's shoes the gamut of the awkwardness of why Star Trek doesn't quite deal with death and resurrection adequately in some tongue-in-cheek moments. As far as the main arc goes with Tendi and Mariner's main adventure, we delve more into Orion culture and how Tendi doesn't fall within typical stereotypes of the "pirate culture", but does blend in when needed. It's consistent with what the series provided for a swashbuckling affair. New episodes of Star Trek: Lower Decks stream Thursdays on Paramount+. 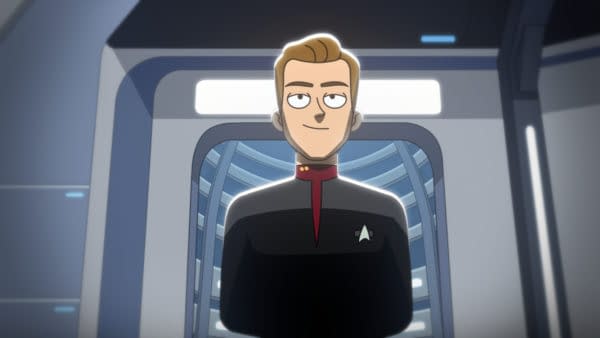 Review by Tom Chang
7/10
Three arcs anchor the latest episode of Star Trek: Lower Decks. The first is a fun away mission with Tendi and Mariner that provides the usual swashbuckling affair. The second and third take place on the ship where two characters explore the meaning of being in Boimler and Rutherford. Standout performances by Jack Quaid, Noël Wells, Tawny Newsome, and Eugene Cordero anchor another decent outing.
Credits
Director
M. Willis