Star Trek: Lower Decks episode "The Least Dangerous Game" feels like it's playing fast-and-loose when it comes to the Klingons. Reducing their experience to a tabletop Dungeons & Dragons-type game called Bat'leths & BiHnuchs that sees the four ensigns Mariner (Tawny Newsome), Boimler (Jack Quaid), Tendi ( Noël Wells), and Rutherford (Eugene Cordero) in an active campaign with Chancellor Martok (J.G. Hertzler) in the role of the dungeon master? Don't get me wrong, I'm a fan of tabletop and a part of active campaigns, but it seems like a stretch even as a comedy that Klingons would participate in such simulations. And yet… Consider this your minor spoilers warning.

At the end of their session, Mariner and Rutherford are called by Commander Ransom (Jerry O'Connell) to go on an away mission to the tropical planet of Dulaine, which plays fast and loose on customs. Ransom assigns himself and Mariner to fix a lift/elevator while the two actual engineers in Rutherford and Chief Engineer Andy Billups (Paul Scheer) are assigned to enjoy themselves with the locals. Trying to make sense of the confusion and role reversal, Mariner grows increasingly more frustrated as things take an unexpected turn on the planet and her "boss" remains stubborn.

The other developing arc is how Boimler remains envious of his current rank when he discovers Vendome (Sam Richardson), a one-time peer, gets promoted to captain and given his own command of a ship. Quaid essentially becomes Jim Carrey in Yes Man (2008), where he accepts all offers coming his way in hopes he gets noticed. One offer he really regrets accepting is alien hunter K'Ranch's (Nolan North) offer to become his prey, so we queue through every clichéd scene from the Predator franchise minus the gratuitous gore. Newsome and Quaid really shine in "The Least Dangerous Game" as we see Mariner and Boimler go through the gamut of their situations to their logical conclusions. I'll admit O'Connell's Ransom is starting to rub off on me since he reminds me of the narcissistic Zapp Brannigan (Billy West) from Futurama, which was an exaggeration of William Shatner's Kirk from The Original Series. New episodes of Star Trek: Lower Decks stream Thursdays on Paramount+ 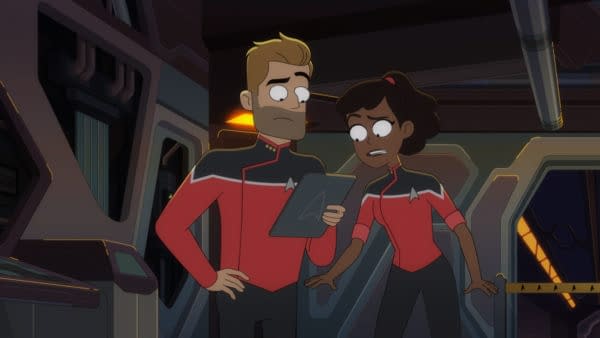 Review by Tom Chang
8/10
Star Trek: Lower Decks stars Tawny Newsome & Jack Quaid really shine in S03E02 "The Least Dangerous Game" as we see Mariner and Boimler run the gamut of their respective situations to their in-the-end logical conclusions. And I have to admit... Jerry O’Connell’s Ransom is starting to rub off on me since he's reminding me of the narcissistic Zapp Brannigan from Futurama.
Credits
Director
Michael Mullen

Star Trek: Picard Season 3: No Janeway But "Other Voyagers" Teased

Though a Janeway cameo isn't in the cards, Star Trek: Picard Season 3 Showrunner Terry Matalas teased that "other voyagers" might be around.

The Last of Us Director on Developing Bill & Frank's Relationship

The Last of Us E03 director Peter Hoar discusses Bill & Frank's relationship and how Nick Offerman & Murray Bartlett made it work so well.

The Flash Showrunner/EP Eric Wallace is putting to rest one fan theory out there about how Barry's (Grant Gustin) final run is going to end.