One thing's for sure: Paramount+'s Lower Decks definitely wears its heart on its sleeve when it comes to Star Trek canon. Especially when they're blatantly spelling it out to their viewers with the second season opener "Strange Energies." The episode primarily focuses on Mariner (Tawny Newsome), Freeman (Dawnn Lewis), Ransom (Jerry O'Connell), Tendi (Noël Wells), and Rutherford (Eugene Cordero). Consider this your minor spoilers warning.

The episode begins with some morning venting and exercise routine from Mariner, which for a cold opening is quite the bait-and-switch since it found a way to reintroduce Cardassians in the new canon, but oh well. Then we come to find that since the secret is out that she is Freeman's daughter, the crew is kind of dealing with the conflict of interest between the captain and ensign much to Ransom's (Freeman's first officer) annoyance. As it team goes on an away mission, tensions come to a head quite literally when Mariner's side mission puts the U.S.S. Cerritos in danger. The non-related arc sees Tendi seeing changes she doesn't like in Rutherford even if it's hardly noticeable by anyone else, particularly his like for pears. The zaniness of her obsession literally turns her into a slightly less psychopathic version somehow of Kathy Bates' Annie Wilkes from Misery trying to "tend" to his medical issues largely lacking in consent once she goes way too far.

Written by creator Mike McMahan, Strange Energies does a great job condensing the revisited storyline of a mortal-turned-God that has been explored before, particularly when Lower Decks references a The Original Series character. It was also previously tackled on multiple occasions on different series like The Next Generation like when Riker (Jonathan Frakes) was given Q powers or when Lt. Barclay (Dwight Schultz) was zapped with super-human intelligence. Obviously, for a comedy and its mix of low and high brow humor, you can probably guess how this crisis on Lower Decks gets resolved. "Strange Energies" is a fun episode for all involved and a great way to kick off the show's second season. Star Trek: Lower Decks streams Thursdays on Paramount+. 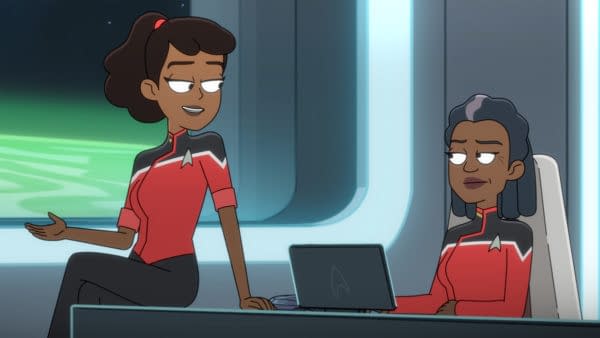 Evil star Michael Emerson spoke with Bleeding Cool about how streaming allowed fans to rediscover shows like Lost and Person of Interest.

Manifest: Here's Why the Now-Netflix Series Will Always Be "Lost Lite"

Though Manifest still has a fourth & final season to go on Netflix, its legacy is being marred by playing it too safe- unlike ABC's Lost.

The Night They Came Home: Saved by the Bell Gets Horror Parody Trailer

Peacock's "non-trailer" trailer re-edits Saved by the Bell as a horror film for Saved by the Hell: Forever (along with new Season 2 clips).

Celeste O'Connor is the latest in an A-list cast that includes Florence Pugh, Morgan Freeman, Molly Shannon in Zach Braff's A Good Person.

Coach stars Craig T. Nelson and Bill Fagerbakke reunite for the CBS sitcom Young Sheldon for a conversation about relationships and a clown.

BBC America's Doctor Who: Flux teaser calls on cosplayers to get involved while also confirming the series premiere and encore times.

Ring of Honor announced a 2022 Q1 hiatus following ROH Final Battle in December, with a "pivot" and a return to a "fan-focused" product in April.