The penultimate episode of Hulu's The Orville: New Horizons season three provides a potential watershed moment within the sci-fi drama. It begins from the fallout of the events of "Midnight Blue" that sees the Moclans trying to forge a new alliance after they were expelled from the Planetary Union for their part in a conspiracy that violated the organization's laws. The Union came to the defense of one of their members in Xelaya with their secret weapon to stave off a fleet of Kaylon ships. This is your minor spoilers warning.

Why Teleya is The Orville's Best Villain

It's safe to naturally assume that Moclus would try to get back at the Union rather than be completely alone against the Kaylon, so they look to the Krill. Ironically, the patriarchal Moclans forge an agreement with the Krill leader, Teleya (Michaela McManus), the female Supreme Chancellor, who agrees to the pact but does not take any misogynistic shit from her new "allies." Meanwhile, the Union secret weapon, which is a literal "Deus ex Machina" as far as the plot goes, is an instrument of genocide to the Kaylon that gives Ed (Seth MacFarlane) pause since it can very well be abused on a grand scale.

Given the elements at play and the new alliance forged, it becomes pretty clear that wheels are in motion and that there might not be any turning back. As far as how the conspiracy and political aspects go with regard to The Orville, it's always been about the execution. And in this last chapter before the season finale, director Jon Cassar and writers Brannon Braga & André Bormanis once again never let their foot off the gas pedal. McManus is coming away as the series' best villain, with nary a whim, charm, or threat that can chip away at her steely resolve. Her core, unlike a number of other female antagonists we've seen in the past in other shows, isn't born of some injustice but rather the principles of the culture she embraced. McManus and Chad L. Coleman (Klyden) are definitely a pair of unsung heroes for the series this season.

Most of this episode channels its "inner Star Wars" a bit as it deals with layered battles from outside the planet, planet-side with smaller vessels, and the infiltration to a military facility. A well-paced, powerful chapter offered everyone their time to shine as we steamrolled our way to the shocking and fulfilling ending. And then that gut-churning realization that we only have one more episode to go. MacFarlane, McManus, Ted Danson, Adrianne Palicki, Jessica Szohr, Mark Jackson & Anne Winters all deserve major props for their work on this episode, and I can't wait to see where all of this is heading with next week's final chapter of Hulu's The Orville: New Horizons Season 3. 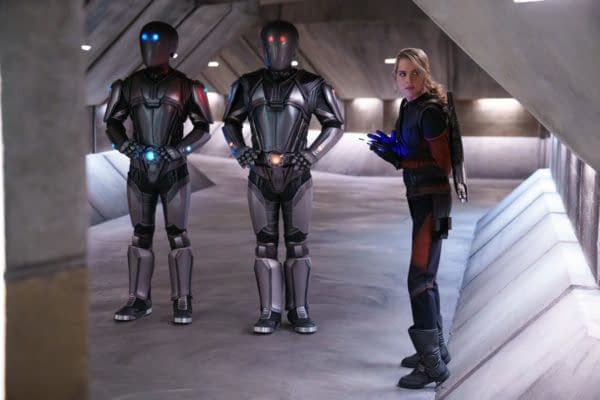 Review by Tom Chang
9.5/10
Creator and star Seth MacFarlane, director Jon Cassar, and writers Brannon Braga and André Bormanis created a level of satisfyingly epic sci-fi that's on par with the best that Star Trek and Star Wars have to offer with this week's episode of The Orville: New Horizons. S03E09 "Domino" has everything you can ever ask for in terms of action, with enough twists & turns along the way to keep you hooked to the shocking ending. Righteous praise and several rounds of applause are owed to all who were involved.
Credits
Director
Jon Cassar

Ms. Marvel writer Fatimah Asghar would love for Kamala Khan to go on an adventure with the X-Men or Wolverine in a future MCU project.

Sean Kanan took to social media to confirm & comment on his return as Mike Barnes, going from The Karate Kid Part III to Netflix's Cobra Kai.